At CES last week, Oledcomm showed software that supports roaming for Li-Fi, and added a gigabit-per-second system for industrial use. 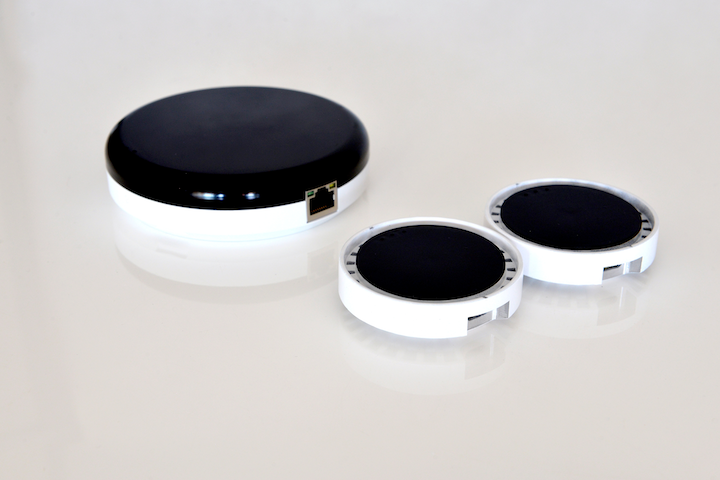 The larger of the three Oledcomm disks is the transmitter, designed to mount on a ceiling and attach to Ethernet cable. The smaller two are dongles, which attach to a laptop via USB cable, to deliver Li-Fi. (Photo credit: Image courtesy of Oledcomm.)

French Li-Fi vendor Oledcomm enhanced its product offerings, more than doubling the speed of its ceiling-mounted transmitter, adding software that supports the handoff of signals as users wander from one Li-Fi point to another in a building, and introducing a super-fast version for industrial uses.

The company introduced the upgrades at last week’s CES (formerly the Consumer Electronics Show) in Las Vegas, a venue where other Li-Fi outfits also exhibited in hopes that the technology will eventually work its way into mainstream consumer use — where it could complement or even compete against Wi-Fi.

Li-Fi uses light rather than the radio waves of Wi-Fi, Bluetooth, and cellular to wirelessly transmit data and the Internet. So far, it has been slow to catch on for a variety of reasons. Among them: Gadget makers have yet to embed Li-Fi receivers in laptops and phones, so users have to attach dongles to their devices. And in a related matter, a standards battle has yet to settle down.

But vendors like Oledcomm continue to up their game in an effort to make the technology more attractive.

At CES, the Vélizy-based company introduced software that allows users to roam from under one transmitter to another without losing their Li-Fi connection. The software, called LiFiMAX Controller, works with Oledcomm’s ceiling-mounted, disc-shaped LiFiMAX transmitter, which the company refers to as an “access point.” Each transmitter is fed with data and electricity via a Power over Ethernet (PoE) connection, and can serve 16 users over 12m2. Oledcomm has set a €990 price for a kit of one access point and two dongles.

The controller software can tie together 10 access points. It resides either in the cloud or in an onsite server. It is scheduled for March availability.

“It is a full software IT network management solution that allows the handover/roaming between access points and enables cybersecurity,” Oledcomm CEO Benjamin Azoulay told LEDs Magazine.

The access point, first introduced a year ago at CES, now operates with a 100-Mbit/sec uplink, to go along with its 100-Mbit/s downlink. Oledcomm uses infrared LEDs rather than visible light because the phosphor coatings used in LED chips for illumination slow down data speeds, Azoulay explained. (Rival Signify started using infrared for downlinks when it introduced its 150-Mbit/s Trulifi 6002 last summer, although it said speed was not the main reason, but that uniformity of drivers and controllers was).

Oledcomm also introduced a system rated at close to 1 Gbit/s, or around 10 times as fast as LiFiMAX. It is positioning the LiFiMAX1G for machine-to-machine, robotic, and Internet-of-Things (IoT) communications in factory-type settings, where it can work at distances of up to 5m. It plans to make the product commercially available in the second half of this year and hopes to sign up pilot users before that.

The company claims to have deployed Li-Fi systems in more than 100 locations. It recently provided the Li-Fi system for a one-off trial of inflight Li-Fi on a commercial flight from Paris to Toulouse.

Editor’s note: Boston University professor Thomas Little will deconstruct the practical limitations holding back deployment of Li-Fi systems, and how to address them, at the upcoming Strategies in Light conference. Make your plans to join us from Feb. 11-13, 2020 in San Diego, CA.