SLD Laser, founded by LED legend Shuji Nakamura, headed off to CES to show lasers as a data communications and sensing technology. 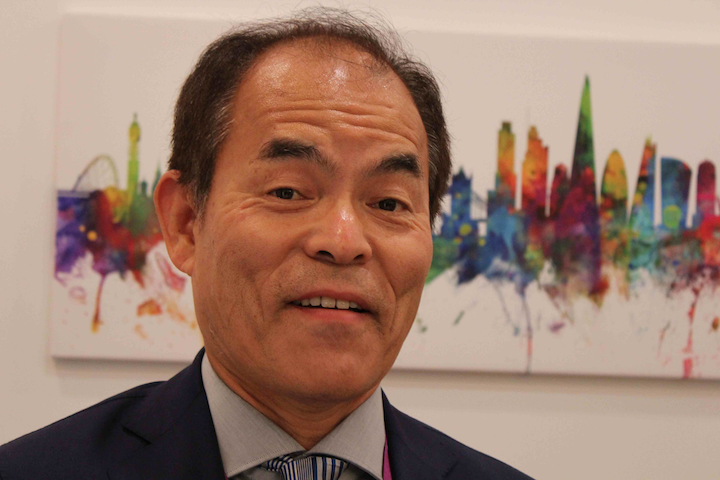 Shuji Nakamura’s company SLD Laser believes a laser is not just for lighting and is going to CES to prove it. [Photo credit: Image courtesy of Mark Halper.]

The laser lighting company co-founded by the Nobel-winning co-inventor of the blue LED — who believes that illumination’s future is in lasers — now hopes to make inroads in another field that LED developers are also targeting: Li-Fi data communications.

SLD Laser, the Santa Barbara, CA company co-founded by LED hero Shuji Nakamura, is heading to this week’s CES consumer electronics show in Las Vegas to show off laser-based Li-Fi that it says can operate at a blistering 20 Gbit/s, which it noted is 20 times faster than 5G, assuming a 5G speed of 1 Gbit/s.

Li-Fi, or light fidelity, wirelessly transmits data using the light spectrum rather than the radio spectrum of Wi-Fi, Bluetooth, and cellular. Deployments so far have been based on LED light sources, not lasers.

SLD’s purported 20 Gbit/s speed is also 20 times faster than the fastest LED-based Li-Fi, which Edinburgh, Scotland-based pureLiFi has shown at 1 Gbit/sec under controlled conditions. PureLiFi, like SLD, is also developing laser-based Li-Fi. LED Li-Fi speeds tend to be slower in actual deployments. Signify claims a speed of 150 Mbit/s for its new Trulifi 6002 system, which is five times faster than Signify’s earlier LED Li-Fi technology, but roughly 140 times slower than what SLD is claiming for its laser system.

But SLD believes that laser-based light can vastly improve upon LED Li-Fi in several ways, including speed.

SLD is not the only company that will be showing off Li-Fi at CES, which runs Jan. 7‒10. As LEDs Magazine reported, French energy and technology agency CEA will be demonstrating technology that mitigates some of the problems that arise when neighboring LED Li-Fi transmitters interfere with each other.

Li-Fi has so far been slow to take off, largely because gadget makers have yet to embed Li-Fi receivers in laptops and phones the way they do with Wi-Fi. Taiwanese ruggedized laptop maker Getac is considering embedding pureLiFi chips into its hardware.

Air France recently trialed Li-Fi for an electronic gaming competition on a Paris-to-Toulouse flight. Although the Li-Fi was not embedded in end-user gadgets, the trial served as a good example of an environment where Li-Fi might make more sense than Wi-Fi.

SLD, founded in 2013 as a spin-off from the Nakamura co-founded violet LED company Soraa Inc., will also use CES to demonstrate lasers for use as sensors in automotive range finding. It says the laser system can replace radar modules, and that they portend dramatic improvements in 3-D imaging and lidar systems.

Co-founder Nakamura shared the 2014 Nobel Prize for physics with two other scientists, Isamu Akasaki and Hiroshi Amano for their work on blue LEDs, which helped usher in LEDs in as general illumination light sources. Nakamura has been instrumental in developing violet LEDs at Soraa but has also for some time professed that the future is in lasers.

Editor’s note: SLD Laser’s Paul Rudy will elaborate on the future of lasers in the solid-state lighting (SSL) market, with particular attention to sensing and Li-Fi, at the upcoming Strategies in Light conference. Make your plans to join us from Feb. 11-13, 2020 in San Diego, CA.