Yesterday’s trial didn’t go quite as planned. Still, the company behind it describes an architecture for smoother transmission that could usher the technology onto commercial airlines. 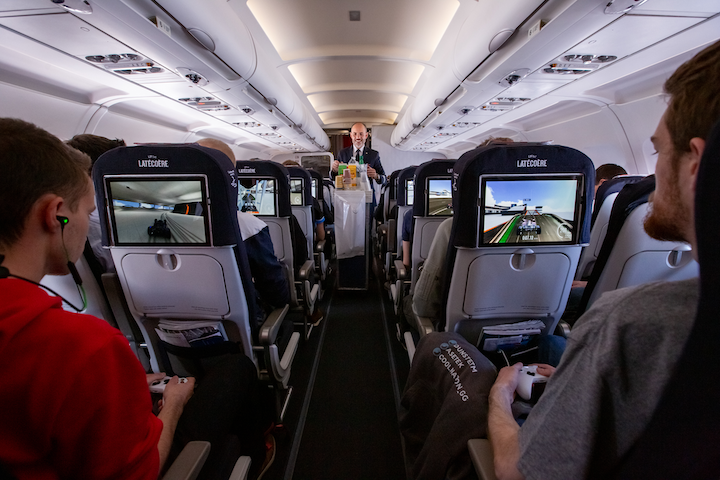 The tray tables are up, but the Li-Fi wasn’t always in the right position as finalists competed in a gaming competition aboard an Air France Paris-to-Toulouse flight. (Photo credit: Image courtesy of Air France.)

Inflight Li-Fi had a patchy maiden voyage aboard an Air France Paris-to-Toulouse flight yesterday, but the avionics engineering firm behind it was undeterred and is pushing on with Signify to establish the light-based transmission technology as mainstream for delivering the Internet on airlines.

Serge Berenger, chief technology officer at aero electrical and structural specialist Latécoère described for LEDs Magazine how Li-Fi will work on commercial flights in the future, despite some teething pains on yesterday’s Air France one-off, which Berenger said operated “reasonably well” while acknowledging “it was not perfect.”

Latécoère had outfitted the Airbus A321 with a Li-Fi system delivering gaming content to 10 finalists in a competition sponsored by French games firm Ubisoft. The temporary Li-Fi covered 12 seats. But there was one snag: The ceiling-mounted light transmitters sometimes had bad aim, so their signals missed the laptop-attached dongles that served as receivers.

As a result, gamers had to complete some of their tasks offline, a workaround that proved manageable, allowed the games to proceed, and still left Air France outwardly feeling positive.

“We are very proud to be the first airline to launch a Li-Fi equipped aircraft and to organize an inflight video game competition,” said Antoine Laborde, the airline’s innovation manager. “I am convinced that this experience will pave the way for new inflight entertainment experiences for our customers, especially with regards to gaming.”

And next time, things should even work better.

“It works perfectly well on the ground, but in flight we had some issues,” said Berenger. Latécoère had trialed the technology in an A320 mockup cabin at last June’s Paris Air Show while hosting an earlier stage of the same competition, and put it to work under real conditions yesterday on flight AF6114 from Orly Airport.

As the integrator on the project, Latécoère took responsibility for the misalignment of the transmitter, which was not the fault of the Li-Fi components provider, France’s Oledcomm.

Yesterday’s proverbial learning experience should help Latécoère and its new partner Signify in their fresh Li-Fi foray into the commercial airline sector, which they announced earlier this week along with South Korean aerospace specialist Huneed Technologies.

Li-Fi is a long-gestating technology that uses modulated light waves from LEDs, rather than the radio waves of Wi-Fi or cellular, to transmit data.

It has yet to establish a big presence. But airlines could become a significant niche market, as Li-Fi would avoid any potential radio interference with flight and control systems, and would cut down on cabling and thus on weight compared to the wiring required for Wi-Fi. Another advantage is that in principle it would not suffer the problems that inflight Wi-Fi can encounter when a plane’s movement disrupts signals, yesterday’s Li-Fi trial notwithstanding.

Li-Fi on planes would also deliver the general benefits that Li-Fi enthusiasts typically describe. Those include fewer signal delays (lower “latency”) than with Wi-Fi, which can slow down or judder when it clashes with other radio signals, including other Wi-Fi. Li-Fi does not suffer from such interference. And the Li-Fi camp says it is more secure than Wi-Fi.

So what would the Li-Fi topology look like on a plane?

Berenger described a layout of four internal hops that would deliver Li-Fi to passengers’ phones, laptops, and gadgets.

For starters, a central server — the same sort that today houses a plane’s entertainment and Internet system — would send signals via lightweight fiberoptics out to a box mounted on the floor, walls, or ceilings of the passenger aircraft. The box will include a modem provided by Signify that modulates the light (Latécoère believes Signify can better meet the challenge of a scale-up than can trial provider Oledcomm); the box would also contain other electronics.

From there, more fiberoptics take the light signal to a transmitter in the ceiling. The transmitter, which uses a lens, will not be part of the plane’s conventionally wired illumination system. It will transmit invisible light in the infrared spectrum, beaming the signals down to a receiver mounted in head rests. The receiver will be the same sort of “dongle” that users today have to plug into their gadgets to receive Li-Fi signals, typically via a USB connection.

In the signal’s final transfer, the receiver is attached to a USB outlet on the back of the seat, allowing the facing passenger to plug in his or her device, much as they can today on flights outfitted with USB connections for other purposes, such as charging a phone.

Eventually, when and if device makers embed Li-Fi receivers, the ceiling transmitters would send signals straight to passengers’ personal devices, eliminating the headrest-to-USB-outlet stage. Berenger believes that will happen in the 2023–2025 timeframe.

One thing that the Li-Fi system will not improve upon is all the delays involved in getting Internet signals to a plane in the first place. That process can have a huge latency, as signals typically travel from plane, to satellite, to ground, back to satellite, and back to plane. And a lot “complex handshakes” happen as plane crosses into a different satellite territory, Berenger noted.

But once the signal is onboard, Latécoère, Signify, Huneed, and the rest of the Li-Fi community believe that the advantages of light over radio should make Li-Fi the go-to airborne Internet transmission technology.