It’s a one-off, but it could help set the stage for a significant niche market. Meanwhile, general commercial use remains slow going, although Signify is now up to 100 pilots. 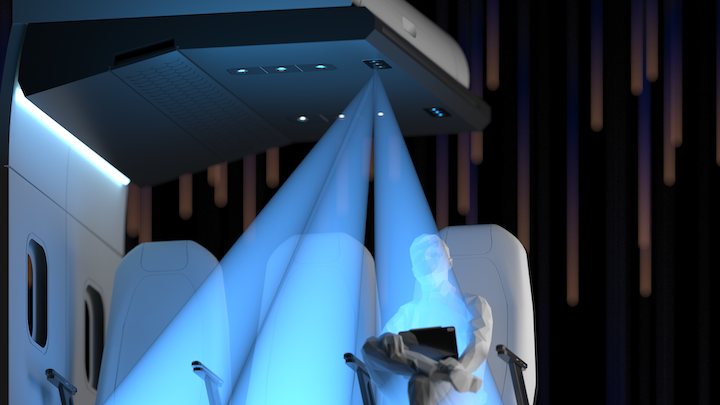 Air France will be serving games and Li-Fi aboard an A321 on Wednesday. The Li-Fi will come from Oledcomm on this occasion. Watch for inroads by Signify. (Image credit: Rendering courtesy of Signify.)

What is believed to be the first ever commercial flight equipped with Li-Fi data service is set to take off on Wednesday, when an Airbus A321 operated by Air France will use the technology to transmit content to 10 finalists competing in a gaming competition, LEDs Magazine has learned.

The Li-Fi will cover a total of 12 seats in a one-off proof of concept and will not immediately continue in service, according to a spokesperson for Latécoère, the French avionics specialist that is operating the system. The Li-Fi‒enabled contest, sponsored by French gaming firm Ubisoft, will take place on a regularly scheduled flight, which the spokesperson declined to identify.

Latécoère, Ubisoft, and Air France-KLM set the stage for this week’s maiden voyage last June at the Paris Air Show, where they held an earlier round of the tournament aboard an Airbus A320 cabin mock-up.

Although the current deployment is for one flight only, it will help demonstrate that Li-Fi could be a viable alternative to other technologies such as Wi-Fi as a conduit for in-flight Internet service. Li-Fi uses modulated lightwaves from LED lights, as opposed to the radio waves of Wi-Fi and cellular. It has struggled to establish itself in everyday settings. Although eventual mainstream use is not out of the question, the airline sector could offer a significant niche market.

In a related development, Latécoère said it has partnered with lighting giant Signify and with South Korean avionics outfit Huneed Technologies to embark on an “industrial scale-up” of Li-Fi for commercial airlines. Neither Signify nor Huneed are part of the Wednesday flight, for which French provider Oledcomm is supplying the Li-Fi.

The Latécoère spokesperson told LEDs that Signify’s Li-Fi modems are better suited for the industrial scale-up. Oledcomm could not be immediately reached for a comment.

A memorandum of understanding (MOU) between Latécoère, Signify and Huneed calls for the integration of Signify’s Trulifi system into aircraft.

“The Li-Fi components will be industrialized in Q3 2020 so as to enable a certified infrastructure for installation in aircraft by Q4 2020,” the Latécoère spokesperson said. No customers are yet lined up.

In a joint press release announcing the MOU, the three companies noted that Li-Fi provides advantages for in-flight communications. In an apparent comparison to Wi-Fi, they pointed out that Li-Fi “doesn’t interfere with sensitive equipment.” They also noted that the airplane’s movements will not disrupt Li-Fi signals. And they claimed that Li-Fi requires less cabling, and thus will reduce a plane’s weight and fuel consumption.

“Through this partnership, Signify and Latécoère will transform the cabin experience for passengers by providing them the latest technology in connectivity,” said Signify chief innovation officer Olivia Qiu.

“The Paris Air Show 2019 gave Latécoère the opportunity to demonstrate the power of the Li-Fi speed,” said Latécoère CEO Yannick Assouad. “Our technology, which showcases our group’s worldwide lead in innovation, raised a lot of expectation from the market and is now ready to progress to the next level.”

Assouad boldly asserted that the new partnership “will enable new opportunities and horizons for Latécoère’s Li-Fi, to ensure its widespread use in airplane cabins.”

Huneed chairman Eugene Kim was equally ambitious in his outlook for the technology aboard aircraft. “Huneed will ensure the delivery of Li-Fi data communication electronics and software to enable the widespread adoption of this technology that will play a critical role in the next generation of smart cabins in delivering best-in-class passenger experience,” he said.

Proponents of Li-Fi in any setting generally note that it does not suffer the delays that can affect Wi-Fi, in part because light does not have the same interference problems that radio waves have when they clash with each other. Thus, Li-Fi could help alleviate the bandwidth crunch and saturation that can afflict Wi-Fi service, especially in areas full of many different Wi-Fi signals.

Li-Fi is also said to be more secure than Wi-Fi.

But Li-Fi continues to remain mostly on the sidelines compared to Wi-Fi. Signify said it now has about 100 pilot installations — up from the 60 it was claiming at the time of its most recently announced deployment at the Volkspark soccer stadium in Hamburg, Germany.

One thing holding back Li-Fi is that gadget and laptop users must attach a USB stick — a dongle — to receive Li-Fi signals. Electronics manufacturers have yet to embed Li-Fi circuitry the way they have for Wi-Fi. While the chip technology exists, a standards battle is dragging on between technologies endorsed separately by the International Telecommunication Union and the Institute of Electrical and Electronics Engineers. And costs of the chipsets will probably remain high until mass production begins.

Signify recently teamed with Vodafone Germany to explore using Li-Fi to help take over indoor Internet transmission from 5G outdoor service. But at the same time 5G providers such as Vodafone are also exploring ways of boosting 5G itself indoors, rather than handing off to other technologies such as Li-Fi.

Qiu from Signify said today that public transport could be a big market.

“Trulifi offers enormous potential and our ambition is, in addition to aircraft, to provide this technology to other forms of public transport as well, so people have access to a reliable, secure, and fast Internet connection, wherever they may be,” she said.

Latécoère does about 42% of its business in onboard wiring, electrical harnesses, and avionics bays, with the balance coming from the design and production of fuselage sections and doors. Its customers include Airbus, Embraer, Dassault, Boeing, and Bombardier.

Huneed Technologies describes itself as “a longstanding developer and manufacturer of tactical wireless communication systems for the South Korean military,” and as a company “ that “has evolved from a Boeing-invested company to a key global supplier for Boeing Defense and Space.”

Its chairman, Kim, said the Li-Fi partnership “aligns with our growth strategy of globally scaling our aerospace business unit into commercial aviation.”