Hamburg team is equipping journalists with USB dongles so they can file their stories through the lights from the press room. 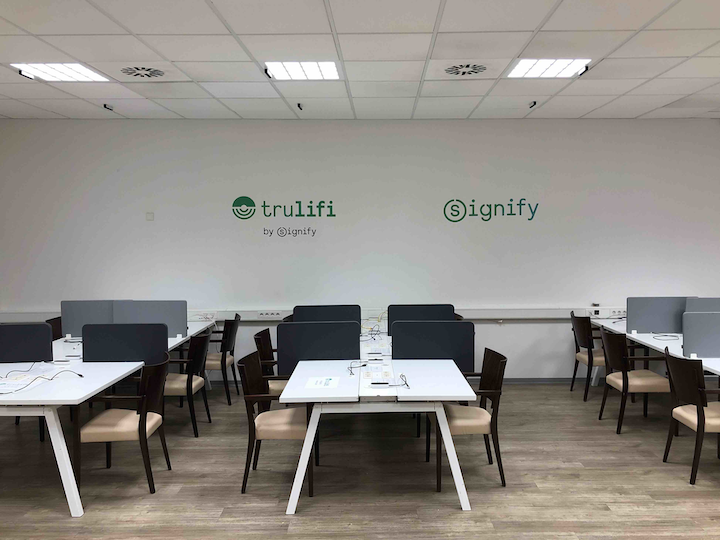 Reporters who sit under these lights in the press center at Hamburg’s Volkspark Stadium can use them to send their stories via Li-Fi. (Photo credit: Image courtesy of Signify.)

German soccer team Hamburger SV (HSV) has installed Li-Fi in a portion of its stadium’s press center to help offload the Wi-Fi that can overload when reporters file their game stories on deadline.

HSV is providing journalists who use the area with a USB dongle which the journalists can attach to their laptops and receive the Li-Fi signal if they sit under the transceiver-equipped lights. The team leaves the dongles out on three tables in the Li-Fi area, which is approximately 15‒20m2, accommodating up to 18 reporters at a time.

Li-Fi uses modulated LED light waves, rather than the radio waves of Wi-Fi, to wirelessly transmit the Internet.

One of its benefits is that it can alleviate the saturation problems that can cause Wi-Fi to slow down or become inaccessible in busy areas.

At Hamburg’s Volksparkstadion (Volkspark Stadium), the Wi-Fi in the press center can bog down with interference from mobile devices used by fans, staff, and game officials. The Li-Fi provides a way around that.

“We opted for Li-Fi given the increasing demand for bandwidth from journalists using our press center,” said Daniel Nolte, HSV’s segment leader for area organization and infrastructure. “For them, a reliable wireless connection is everything. Now they have good quality light to write their stories along with a reliable, fast, and highly secure wireless connection.”

Signify’s Trulifi 6002 operates at 150 Mbit/s, a five-fold increase in speed over Signify’s earlier Li-Fi, now called the Trulifi 6001. The 6002 uses the infrared (IR) spectrum, as opposed to the visible light of the 6001, to transmit. Both the 6002 and 6001 use IR to carry signals back from the dongle to the transceiver, which is wired to the Internet via Ethernet cable. In some Li-Fi installations, the Ethernet wire also carries electricity that powers the lights (Power over Ethernet), although in this case electricity travels to the lights via conventional electrical wiring.

Signify introduced the faster 6002 in June, when it also announced two small Li-Fi installations, one at Romanian institutional investor Globalworth in Warsaw, and another at Belgian marketing and communications firm Clearhout Communication Campus in Ghent.

Li-Fi has been slow to take off in part because laptop and gadget makers are not yet building it into end-user devices the way they do with Wi-Fi chips. A standards battle is not helping mass adoption, as Signify backs an ITU model and other Li-Fi makers embrace the IEEE approach.

Until Li-Fi is embedded in devices, users will need dongles such as the ones that HSV is providing to journalists at the 57,000-seat Volkspark, which HSV owns. HSV plays in the lower division of Germany’s top professional league, called the Bundesliga.

Li-Fi installations in general have been small and pilot-oriented, such as in the main lobby at the Stavanger offices of Norwegian systems integrator Atea.