Re-igniting a partnership? This time, a Norwegian systems integrator has built its new Stavanger office as a “living lab” that also includes VLC and a Li-Fi experiment. 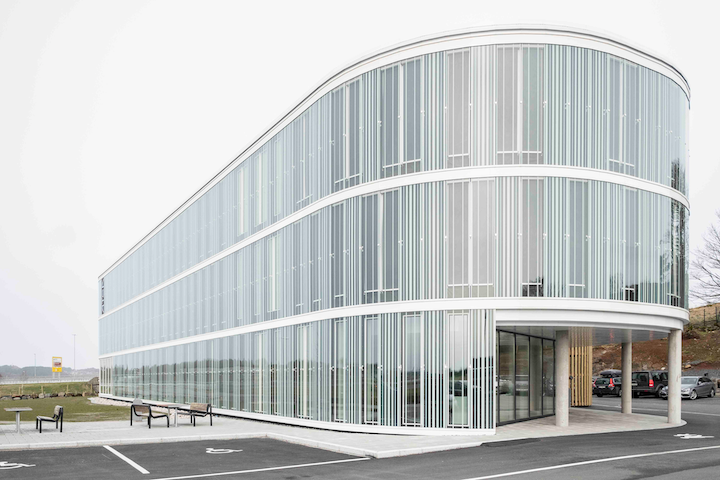 Signify has teamed up with its old Power over Ethernet (PoE) collaborator Cisco to provide PoE to Atea, a $1.1 billion Norwegian systems integrator that is sampling several other Signify smart lighting technologies including visible light communications (VLC) for location services and Li-Fi for Internet.

The deployment at Atea’s new three-story Stavanger office is serving as a “living lab,” allowing Atea to showcase the technology while also using it, the three companies said in a joint announcement. Atea is a Cisco technology partner and is also joining Signify’s value-added partner program.

Oslo-based Atea has outfitted Stavanger with 500 Signify PoE luminaires covering 3500m2 on all three floors plus the basement, serving the building’s 115 employees. Ethernet cable carries low-voltage electricity that powers the LED lights and carries data back from Signify sensors embedded in the lights, all part of Signify’s Interact Office smart lighting scheme, and routed via Cisco switches.

The sensors currently gather information about light levels and occupancy. Additional sensors might eventually also take note of temperature and humidity, Signify director of office, education, and municipal buildings Derek Wright told LEDs Magazine. The data travels both to Signify systems as well as to Atea systems. It is used for a number of purposes, including monitoring energy use and faults. It is also used to analyze building use, providing insights into how to improve space allocation.

About 50% of the 500 luminaires are outfitted with sensors. The luminaires are a mix of Signify’s TrueLine suspended and PowerBalance recessed model. Signify also installed some LuxSpace downlights.

Atea opened the Stavanger office last October, so the installation fits the general rule of thumb that PoE makes sense in new locations as opposed to in existing facilities, where rewiring can be too costly.

In new builds, PoE can save considerable money by sparing the costs of conventional electrical cables and electricians. The Ethernet data networking at the Stavanger office, including Wi-Fi, is the purview of Cisco.

“We have one single network powering our lighting and our Wi-Fi, getting information from all the sensors,” said Espen Riska, director of Atea Stavanger .”It’s one single converged network.”

PoE is not the only smart lighting technology at play, as Atea is also using VLC and, on a limited basis, Li-Fi.

VLC sends signals via light to users’ phones and gadgets. Atea is using it for a couple of functions, including helping employees find available workspaces or meeting rooms. VLC also supports a lighting control system, identifying individual users and the lights near them, and allowing the users to control the lights via an app connected to Wi-Fi. Eventually, the VLC might also allow control of heating and cooling systems in meeting rooms, Wright told LEDs.

Atea is also trialing Li-Fi, the technology that transmits Internet service using modulated LED light waves (rather than the radio waves of Wi-Fi) for the downlink and infrared for the uplink. The small Li-Fi deployment in Stavanger is in the main lobby, using two PoE-connected Signify luminaires. Both employees and visitors can access it if they have an attachable dongle that receives Li-Fi signals (Li-Fi is not yet embedded in laptops and gadgets).

Wright said Atea is trialing Li-Fi as a means to complement the building’s Wi-Fi service. “It’s something they’re experimenting with,” he said.

Atea is also experimenting with what it calls “bio-adaptive” lighting in the building’s atrium, delivering boosting blues for alertness or relaxing reds, depending on the occasion or time of day, using a Signify Color Kinetics system controlled via DMX but also believed to be connected to the PoE.

As a PoE team, Signify and Cisco are best known for their partnership at The Edge building in Amsterdam, an early example of PoE lighting that goes back to 2014, when Signify was called Philips Lighting. In those pioneering days the two companies looked ready to rack up any number of PoE lighting jobs. The PoE lighting wave has not yet swept up the user community, but proponents still believe that it will, pointing to examples like the Atea Stavanger installation.

In another recent but small PoE deployment, Signify has outfitted a German office of Swiss pharmaceutical company Roche with the technology.