All data, all the time: The company’s new Interact system continuously collects and analyzes information gathered from lighting and other sources. 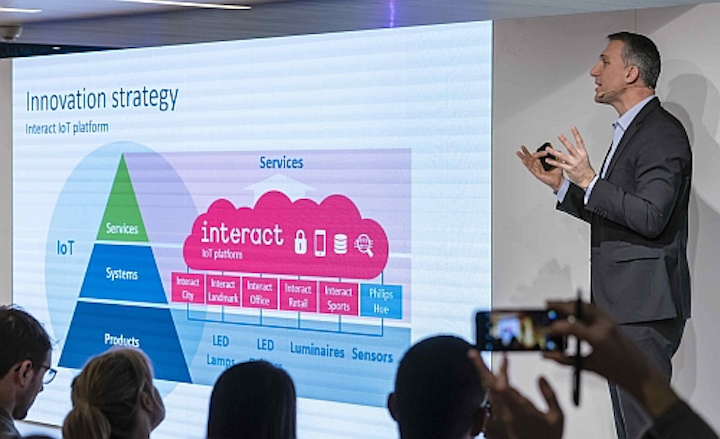 All data, all the time: The company’s new Interact system continuously collects and analyzes information gathered from lighting and other sources.

In the biggest declaration yet that the Internet of Things represents the industry’s future, the world’s largest lighting company, Philips Lighting, unveiled an IoT platform that turns lighting into a byword for collecting and analyzing data about everything, everywhere.

Interested in articles & announcements on IoT lighting technology and applications?

Sounding as much the head of an IT company as a lighting company, CEO Eric Rondolat repeatedly emphasized the importance of data acquisition and analytics in introducing the new lights-to-cloud-and-back capability, called Interact.

“You can imagine all these devices — lamps, drivers, luminaires, sensors — being connected, sending information through software, and all this software sending this information back to a cloud-based platform, an IoT platform that is called Interact,” Rondolat said at the Light+Building exhibition in Frankfurt. “That platform is taking in account data security, data authentication, data storage, but also data analytics that we can, with our own services but also with open APIs with the services of third companies, be able to extract further value from the data.”

Minutes after Rondolat introduced Interact, Philips issued a press release that used the word “data” 17 times in noting that Interact “supports the company’s strategy to deliver new data-enabled services as value expands from lighting products and systems to services.”

Interact puts sensors and chips into lights and the lighting infrastructure to spot activity such as room occupancy, road traffic, and air quality. It connects this information through wired and wireless communication networks to a cloud computing system that provides analysis such as how to better use space inside a commercial building, and how to improve the flow of cars on a highway. 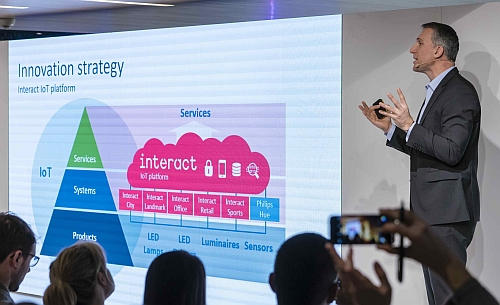 Philips Lighting CEO Eric Rondolat sounded as much like the head of an IT company as the boss of the world’s largest lighting company in announcing the data-intensive Interact IoT lighting platform. (Photo credit: Philips Lighting.)

Philips and many lighting vendors have been talking up such broad IoT lighting schemes for a couple of years, and some such as chipset company Gooee and others have already launched lights-to-cloud programs. But Interact is Philips first formal IoT “platform,” and coming from the industry leader, its introduction marks a symbolic coming out for the concept.

The press released noted: “Connected light points, sensors, and devices, as well as systems, can collect large volumes of data for which Interact was designed to handle. The highly secure, scalable cloud-based Interact platform uses sophisticated and modern data management and data processing capabilities, including machine learning, to bring sense to all manner of data — creating data-enabled services for customers that will deliver benefits beyond illumination. Interact will not only support customers to improve their lighting experiences but can also generate and upload data to the Interact IoT platform.”

The company is also providing industry specific software applications for different markets. It said that it is currently targeting five vertical markets: Interact City for public space lighting, roads, streets, pedestrian areas, parks, and plazas; Interact Landmark for architectural lighting; Interact Office for offices and commercial buildings; Interact Retail for large retail and food stores; and Interact Sports for stadiums. It plans to launch Interact Industry aimed at factories and warehouses later this year. It said other industries would follow.

Existing customers will be able to tap into Interact via software updates to their IoT systems, Philips added.

“By analyzing the data from our connected lights, devices, and systems, our goal is to create additional value for our customers through data-enabled services that unlock new capabilities and experiences,” said Harsh Chitale, leader of Philips Lighting’s Professional Business.

Interact can also weave in information from other sources. For example, it can gather social media feeds and news reports that help city officials gauge public reaction to new roads or works projects.

The Interact IoT offering caps several days of announcements from Philips all aimed at boosting its capabilities in smart IoT lighting. In another overarching move, the company said late last week that it plans to change its name Signify, a moniker that embraces the IoT ethos.

While Philips and the lighting industry in general are banking on a future in the IoT, they will find themselves competing against information technology companies for the business.

The company is showing all of the new IoT wares and services, including Interact, at the Light+Building trade fair in Frankfurt, where LEDs Magazine editor Maury Wright is immersed in the action. LEDs will bring you more on this story as it unfolds.