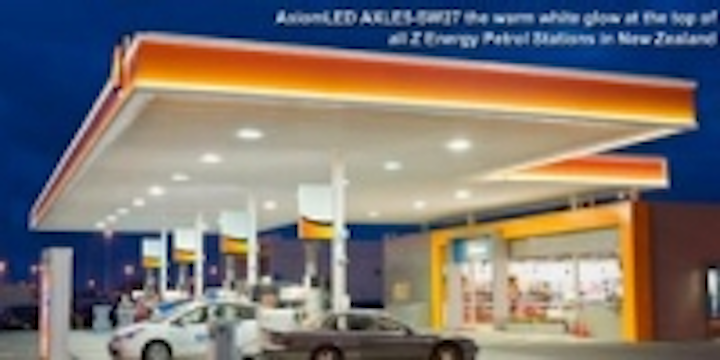 Auckland New Zealand -- AxiomLED announced today that it has provided the LED lighting behind the massive rebranding of all Shell Petrol Stations in New Zealand to the new country-owned brand of Z Energy.

Z Energy was formed when New Zealand company Infratil Limited and the Guardians of New Zealand's Superannuation Fund got together and bought Shell's New Zealand downstream business. They called the company Greenstone Energy.

Harkess Ord was selected to be the brand designer to reimage the Shell Petrol Stations. From one end of New Zealand to the other, they sat people down, and asked them what they wanted out of a New Zealand fuel company. They were told that the idea of a New Zealand energy brand, run by Kiwis and with a heavy dose of New Zealand attitude was compelling. The branding of Z Energy was developed.

“We are very confident that Harkess-Ord will help us deliver re-branded sites that we can be proud of and service stations which we are confident New Zealanders will respond to because they have been tailor made to deliver what 17,000 people said they wanted from a New Zealand energy distribution company”, said Mike Bennetts, CEO of Z Energy.

“It is a pretty good feeling to know that some companies around the world respect and appreciate a well-made product,” commented Manuel Lynch, CEO of AxiomLED. “To be selected by Harkess Ord as the LED of choice to help New Zealand create a recognizable brand on street corners throughout the country shows how AxiomLED partnered with Nichia of Japan is a reliable, high performance, low cost solution.”

The AxiomLED system uses patented and protected Nichia of Japan LEDs. Nichia is the world leading inventor and producer of the the white LED. The company’s products are also used by world recognized brands like Apple.

The AXLE5-SW27 series is $1.99 per module and the AXLE9-SW27 is $1.25 per module. Both products use Nichia Warm White 2700 Kelvin LEDs that have recently completed LM80 testing showing minimal light drop or color shift when exposed to heat levels in excess of 105C or 221F and current levels in excess of the maximum rating of the LED.