The human-centric lighting specialist has parted ways with Plessey to find a more efficient violet chip. 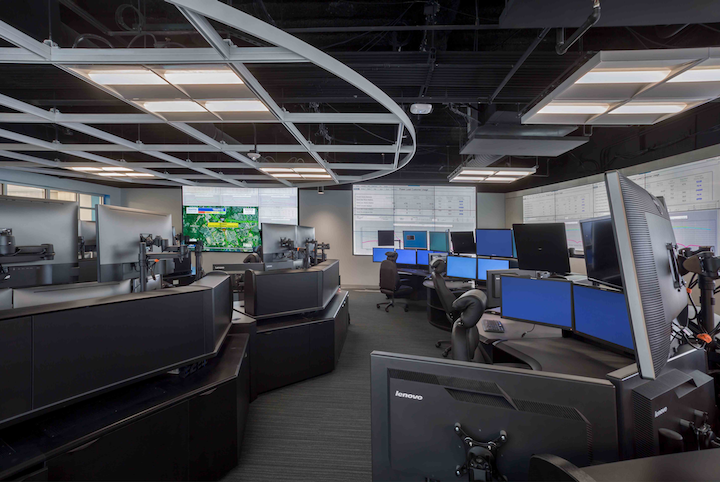 Office installations like this one outfitted by Circadian Light can operate with greater lumens per watt now that Circadian has replaced its violet chip with a different violet chip that is twice as efficient. (Photo credit: Image courtesy of Circadian Light.)

Human-centric lighting specialist Circadian Light has improved the efficiency and output of its biologically-geared LED light engine, and has licensed the new hardware to Acuity Brands in the first of what Circadian hopes is other similar deals.

Circadian’s new chipset consumes much less energy at night than the previous iteration, and delivers higher doses of blue spectral content around 475 nm during the day, when blue is generally advantageous to the human circadian rhythm, CEO Martin Moore-Ede told LEDs Magazine.

Conversely, the new chipset strips out even more blue than the previous model did at night, when blue is undesirable, Moore-Ede said.

Stoneham, MA-based Circadian is providing the new light engine to Atlanta-based Acuity, which will build it into Acuity-branded luminaires.

In a related move, LEDs has learned that Circadian has replaced its longtime supplier Plessey Semiconductors and tapped a different LED vendor for the new light engines. Moore-Ede declined to identify the new provider. Plessey continues to provide chips for the older product.

Circadian is a pioneer in human-centric lighting, also known as circadian lighting. At the 2017 Lighting for Health and Wellbeing conference, Moore-Ede spoke with chief editor Maury Wright in a video about customized spectral content for circadian lighting. In general, circadian lighting aims to deliver more blue spectral content during the day, when it tends to stimulate humans and facilitate a circadian rhythm that relies on daytime alertness to help bring on nighttime sleep. It also minimizes blue at night, when blue would suppress melatonin, a hormone associated with sleep.

“Extensive research over the last fifteen years has shown that the spectrum, intensity, and timing of light exposure can impact human health and wellbeing by either maintaining or disrupting circadian rhythms,” Moore-Ede noted. As a speaker at the 2018 Lighting for Health and Wellbeing conference, he had presented on this foundational research and expanded to the debate surrounding models used to study the measurable impact of light on human circadian rhythms.

Circadian Light builds both a blue chip and violet chip into its light engine, which is a printed circuit board. The blue kicks in during the daytime, and the violet takes over at night, all but eliminating blue spectral content. Violet emits at around 415 and 420 nm, close enough to blue’s 450‒475-nm range to support a full color palette, but far enough away to avoid the deleterious nighttime effects of blue.

One problem has been that violet chips have struggled with energy efficiency.

“The efficacy of violet dies were way behind the 450 blue dies and that type of range,” Moore-Ede told LEDs. “We’ve been able to source dies that are double the efficacy of what we’ve used before. So we’re not compromising energy efficiency like we were.”

The new violet chips deliver around 130 lm/W compared to the previous 60 lm/W, he said.

The new chipset also delivers a stronger dose of blue during the day than the earlier chipset, with the daytime blue being 85 times the dose of nighttime.

It is this new chipset that Circadian — the company’s official name is Circadian ZircLight but it does business as Circadian Light — is providing Acuity.

“Circadian lighting supports the natural circadian rhythms of human beings,” said Rick Earlywine, Acuity’s senior vice president, architectural lighting solutions. “Our bodies are tuned to respond to the key circadian signal in natural light, which is blue-rich during the day and depleted of blue after sunset. Yet traditional lighting technologies, including LEDs, were developed to provide energy-efficient lighting with high enough light levels for humans to see well; circadian lighting considerations were not really in the mix. Circadian ZircLight is addressing this limitation.”

Circadian is talking to other lighting suppliers, including in Europe and in Asia, about using the new light engines. The company also continues to sell directly to end users such as commercial offices, working with contract manufacturers who build Circadian engines into finished products.