Targeting entertainment and architectural lighting, the Lumileds Luxeon Z LEDs measure only 1.3×1.7 mm and can be densely packed in full-color arrays. 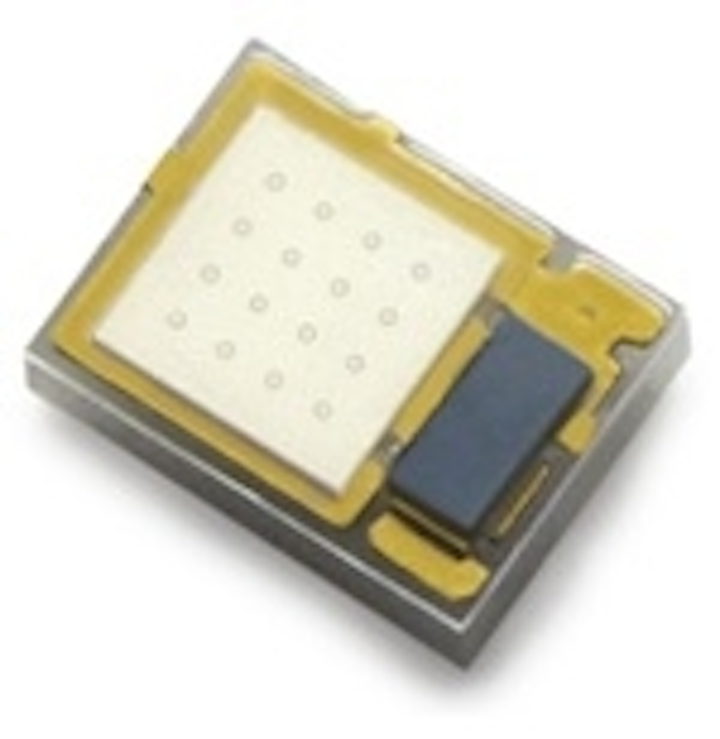 Philips Lumileds announced the Luxeon Z series of LEDs with models across the color space from 670-440 nm, and in phosphor-converted 4000K white. The 1.3×1.7-mm LEDs target maximum lumen density in entertainment- and architectural-lighting applications that luminaire designers achieve by closely packing the LEDs.

Lumileds took a fundamentally different approach to color-lighting applications with the Luxeon Z. According to Stalker, most companies are packaging rectangular and linear arrays of emitters with specific color mixes. He said, "We focused on Luxeon Z as bringing out a building block." Product designers can elect the mix of colors needed, including the ability to mix white and amber LEDs into a design.

Theoretically, Lumileds said you could mount as many as 250 of the new LEDs in a 1-in2 space. Stalker admitted that there would be tough thermal and electrical challenges to doing so, but the point is that you can easily realize the mix of colors required in an application and the orientation in rectangular or linear arrays.

The LED design is also accommodating when it comes to adding the optics required for an application. Lumileds chose not to place a dome over the LEDs so that optics can be coupled directly to the LED surface.

As an example of how you might use optics with a custom configuration of the Luxeon Z LEDS, Stalker said you could employ a collimating optic or light pipe over an array of one of the LEDs that implement a color-changing element. He said that most packaged color arrays have lenses that prevent the use of such a collimating optic that is critical for zoom control.