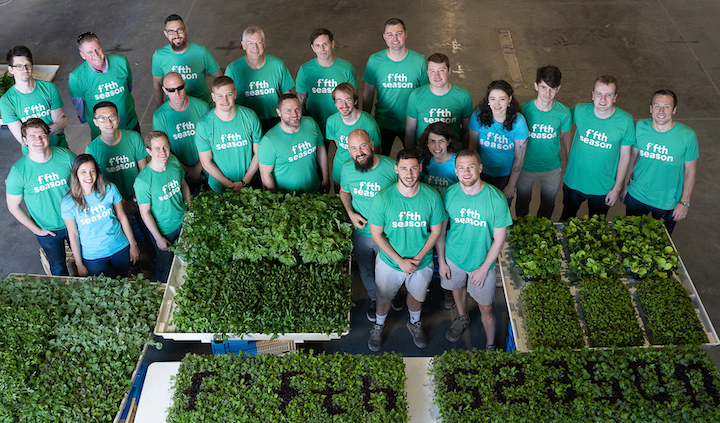 Fifth Season, a vertical farm that got its start with Carnegie Mellon University, expects its growing room to yield 500,000 lb of greens in its first year of commercial operation. (Photo credit: Image courtesy of Fifth Season.)

Fifth Season, a vertical farming startup originally launched as RoBotany Ltd, has announced details of its 60,000-ft2 LED-lit vertical farm under construction in Braddock, PA near the city of Pittsburgh. The company has raised $35M (million) in venture funding and plans a start to commercial growing operations in early 2020. A 25,000-ft2 growing room lit with GE Current solid-state lighting (SSL) is slated to yield 500,000 pounds of lettuce and other leafy greens in its first year of operation.

The Fifth Season blueprint to future success is an increasingly familiar one — build a high-yield vertical farm near a large population center that can deliver premium produce with little transportation cost and spoilage. We first covered the concept back in 2014 at Green Sense farms located within an easy drive of Chicago, IL. The controlled environment of a vertical farm eliminates pesticides, can deliver produce that’s essentially better than organic, and maximizes the use of the growing room footprint through the vertical architecture.

Vertical farming has clearly caught the eye of the investment community as we covered in a recent horticultural lighting feature article. AeroFarms near New York recently raised another $100M in venture funding. And Silicon Valley-based Plenty has raised $200M from high-profile sources. European farms are having similar funding success.

The question you might ask is what separates the burgeoning new-age farms from one another? All have roots in technology. But all also have different ideas about how to best use the common aspect of vertical space, different areas where they hope to bring technology to bear, and the longer-term need of figuring out how to grow more than leafy greens. The greens are fantastic but won’t fill the full demands of the growing population base alone. Fifth Season’s technology base comes courtesy of its incubation at Carnegie Mellon University’s (CMU’s) Swartz Center for Entrepreneurship. That center combines CMU’s resources in business, robotics, and other schools. The company has developed two small R&D farms and is already supplying leafy greens to restaurants and specialty markets in the Pittsburgh area.

The Fifth Sense farm is to be lit with GE Current Arize luminaires. On a mostly unrelated note, GE Current is now the latest name or brand of what was once the commercial-lighting arm of GE Lighting. The company — through its brand transitions — has been one of the leading suppliers of horticultural SSL products.

The real differentiator for Fifth Season, however, may be the robotics systems that will pervade the plant factory. Ultimately, robotics and artificial intelligence (AI) will presumably lower the cost of the produce grown at the facility.

"We have developed fully integrated, proprietary technology to completely control the hydroponic growing process and optimize key factors such as energy, labor usage, and crop output," said Austin Webb, co-founder and CEO. "The result is a vertical farm design that has over twice the efficiency and grow capacity of traditional vertical farms. Our unprecedented low costs set a new standard for the future of the industry."

The facility will be partially solar powered. And the company said it will utilize 95% less water relative to legacy vegetable farms.

The prevailing theme of the Fifth Sense announcement is the system-engineering angle of the work and the reliance on technology that goes far beyond LED lighting. We recognized that trend earlier this year and consequently rebranded and expanded the scope of our annual horticultural event as the HortiCann Light + Tech Conference. The one-day immersive event will take place Oct. 31 in Denver, CO. Our keynote presentation from Neil Mattson of Cornell University and the GLASE (Greenhouse Lighting and Systems Engineering) Consortium will set the course for the day, looking at the system-level challenges to more productive farming in controlled environment agriculture (CEA).