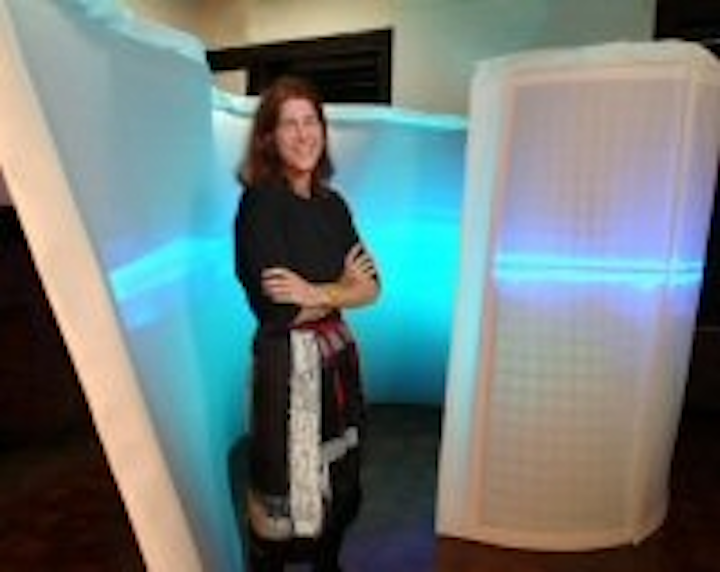 Korean buildings make use of LED lighting effects (Aug 06)
As in other cities around the world, Seoul has a number of buildings that have updated their appearance using LED lighting.

Flying high in Malmö: LEDs light up the Turning Torso (May 06)
More than 16,000 white LEDs have been used to create an innovative LED lighting system for Europe's tallest residential building, according to Jørn Brinkmann of Osram Denmark.

LEDs bulbs headline at historic theater in NY state
A grant from NYSERDA has helped update the lighting on the Bardavon Theater's marquee with LED bulbs supplied by LEDtronics.

Designer-friendly LED luminaires increase conceptual options
Advances in solid-state lighting are opening up a whole series of possibilities in design and architecture that are limited only by our imagination, writes Ian Mills of Philips Lighting.

Urban lighting presents challenges for designers
LED fittings are now suitable for use as uplighters, and will soon become widely used for flood and wash lighting applications, although a number of issues need to be considered.

LEDs prove attractive to shoppers - and save energy
Colored lighting designs using LEDs can save energy and improve the appearance of store windows, according to a field study conducted by the Lighting Research Center.

Prow Sculpture uses LEDs as art and timepiece
A new addition to the Manhattan streetscape is a transparent tower illuminated by LED color-changing panels.

LEDs find their niche in architectural lighting
Lighting designer Iain Ruxton thinks that LEDs are "still a bit of a gimmick", although the technology has great potential provided that certain inherent problems can be ironed out.

Roadside LED matrix responds to traffic flow
The Craigieburn Bypass in Melbourne, Australia is the home to a world-first roadway feature: a 300-metre-long interactive matrix of 935 colour changing LEDs.

Escaping the bulb culture: the future of LEDs in architectural illumination
The real value proposition for LEDs lies in the change from bulb culture to digital light. LEDs Magazine spoke with Sheila Kennedy, a passionate advocate of LED technology.

LEDs find their niche in architectural lighting
Lighting designer Iain Ruxton thinks that LEDs are "still a bit of a gimmick", although the technology has great potential provided that certain inherent problems can be ironed out.

LEDs among winners in 2005 Lighting Design Awards
Car parks, TV studios and road signs were among the award-winning projects that utilized LEDs at this year's awards.

Brussels conference sprouts better understanding of LEDs
Interaction between lighting designers, luminaire manufacturers and LED suppliers should help the LED industry to focus on its strengths and continue to develop.

Specifier study reveals industry attitudes towards LEDs
A study has revealed that architects and lighting designers tend to specify fixtures with LEDs to create entirely new applications, while engineers more often specify traditional fixtures that use LEDs as the primary light source.

i-Vision and VSI hit the jackpot

Wired blog site highlights LEDs in architecture (Jul 06)
Wired magazine's website has pulled together a series of architectural projects with a heavy focus on LEDs.

PublicScreen uses LEDs to revive office space (Jun 06)
A small interior space has been opened out and transformed through the imaginative use of LED lighting.

Barco covers Vienna building with LED blocks (May 06)
Barco has entered the architectural market by covering a building in Austria with 180,000 LEDs.

Dark skies overcome by LEDs on Melbourne tower (Apr 06)
Melbourne's dark sky requirement pointed to the use of LED fixtures to illuminate a prominent building.

Barometer controls LED colors on London tower (Apr 06)
A new LED installation in London uses an atmospheric barometer and a Pharos controller to adjust its color.

LED modules give abominable glare to Yeti’s stare (Mar 06)
A promotional event in Times Square made use of Osram Golden Dragon LEDs in Dragonchain modules.

Architectural lighting, art and color-changing LEDs (Mar 06)
A number of new projects illustrate the range of applications of LEDs.

Architectural: Pulsar lights a mine, i-Vision hits the ceiling (Dec 05)

LTP and Color Kinetics light up the Pru (Dec 05)
An atrium filled with bubble tanks provides a unique architectural feature in the HQ of Prudential Assurance.

Lighting projects: Cyberlux, i-Vision and Permlight
Cyberlux has installed an emergency lighting system, i-Vision has fitted out several hotels in Norway, and Permlight has supplied LEDs lights to a housing project.

Projects: G-LEC, Element Labs and LED Illumination Ltd
G-LEC has installed a giant PhantomFrame display, Element Labs' VersaTILE has been used at the Hard Rock London, and LED have been used to illuminate a hotel ceiling in Hong Kong.

PLM provides solar-powered LED up-lights for urban project
A project to plant and illuminate trees in the city of Manchester has been enhanced by the use of LED lighting.

PLM provides solar-powered LED up-lights for urban project
A project to plant and illuminate trees in the city of Manchester has been enhanced by the use of LED lighting.

Solar linear fixtures light up inside of religious building
A Christian Centre in Birmingham, UK has been lit up by Lighting Effects Distribution and TMC using SOLAR RGB fittings.

Church seeks LED lighting to highlight steeple
The University of Maryland wants to evaluate LED fixtures as a possible lighting solution for a church steeple.

Artistic Licence provides control for lighting projects
Artistic Licence's Colour-Tramp control system has been used on a number of high-profile projects around the world.

Metropolis supplies customised LED fixtures to Sportsman Casino
A requirement for movement of color dictated the choice and design of LED fixtures for a London venue.

LEDs simulate sky in the ceiling of a government call center
The advantages of small size and high brightness, combined with creative installation, have enabled LEDs to recreate the sky inside and office building.

TIR Systems to light up Hong Kong’s harbour front with LEDs
LED lighting from TIR is part of Hong Kong's plan to illuminate its harbour.

LTP sends LEDs to the Twilight Zone
A new section of a UK museum covering the underwater world has received the LED lighting treatment.

Pulsar adds color to QEII conference center
Multiple LED color-changing fixtures have been used on the outside of a prominent building in London.

Plan your route with Eyeleds®Outdoor Pro