Study by the University of Pittsburgh looks beyond energy savings of competing streetlight technologies and provides a life-cycle assessment that starts at manufacturing. 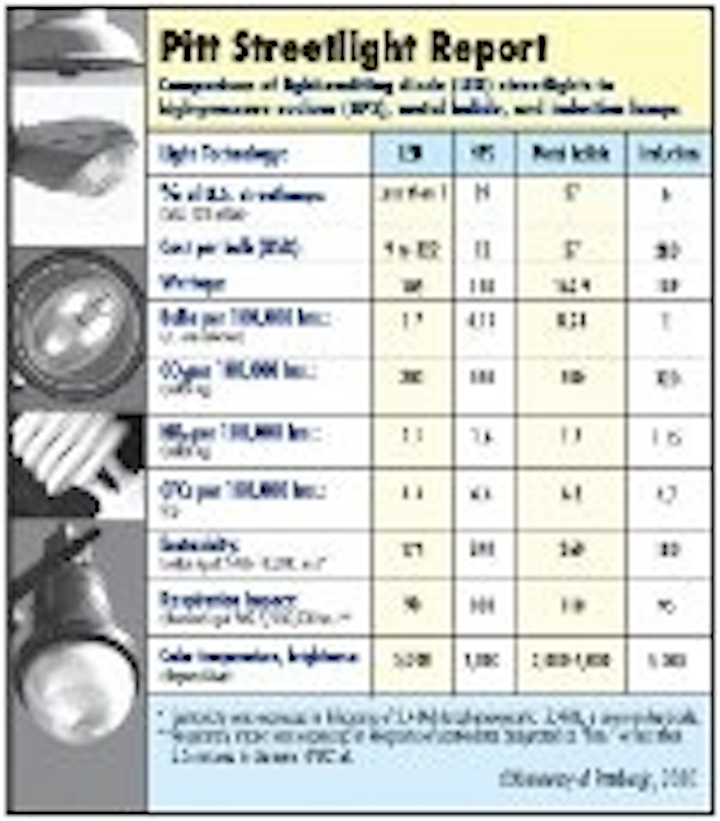 The Mascaro Center for Sustainable Engineering based in the Swanson School of Engineering at the University of Pittsburgh (Pittsburgh, PA) has published what it calls the first cradle-to-grave assessment of streetlight alternatives. The research compares LEDs with metal-halide, high-pressure-sodium (HPS), and induction technologies, and identifies LEDs as the winner despite concerns about environmental issues in LED manufacturing and recycling.

The research team reported that despite the steep up-front costs of LED lights, the technology yields street lights that use less than half the energy, last five times longer, and produce more light than metal-halide and HPS lights. Gas-based induction lights are another emerging technology, and the team reports that the lights surpass the LED alternative in terms of energy use and light efficiency but also have a greater environmental impact when in use.

The City of Pittsburgh commissioned the research and the first conclusions emerged in the Pittsburgh Post-Gazette back in January. The city had estimated that by converting to LED streetlights, it could save $1 million in energy costs and $700,000 in maintenance costs while reducing carbon emissions. But the city wondered if there were other aspects of LEDs that should be considered.

The university research set out to catalog the environmental impact of the streetlight technologies during the complete lifespan – from the extraction of raw materials and assembly to power consumption to disposal.

The team discovered that LEDs have more negative environmental and health effects than the other technologies during manufacturing. The circuit boards that host LEDs require numerous raw materials and are difficult to recycle. But LED housings that are composed primarily of plastic and wire consume far less energy in the manufacturing phase than does manufacturing the aluminum-heavy HPS casings.

Up front of course, everyone knew that LEDs cost more to purchase. To replace its 40,000 street lights, the city of Pittsburgh would spend $21 million for LED lights compared to $9 million for metal-halide lights. But projecting maintenance costs, the report concludes that replacing burned out metal-halide lights would cost as much as $44 million before the first LED streetlight would need to be replaced.

The complete report is available on the University of Pittsburgh web site.