A test installation of LED streetlighting in Oakland suggests payback periods might be longer than expected. 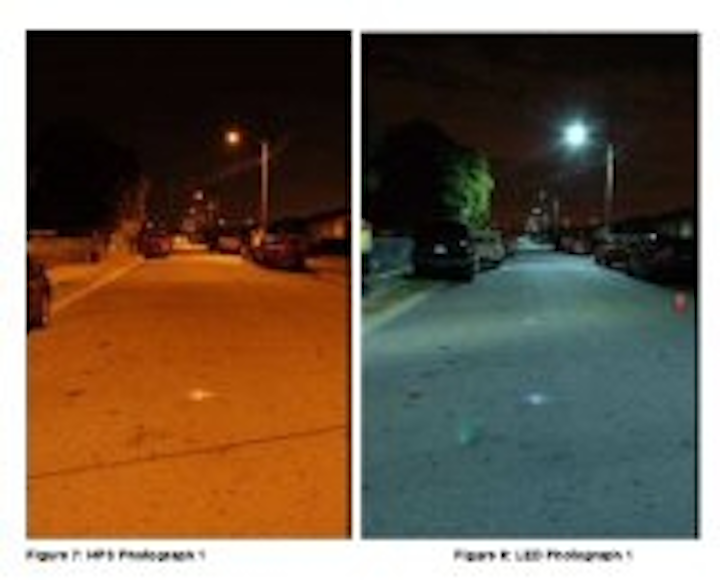 A report on a demonstration of LED street lights in Oakland, California has been published by the U.S. Department of Energy (DOE) as part of its Solid-State Lighting (SSL) Technology Demonstration Gateway Program. This program showcases high-performance LED products for general illumination in a variety of commercial and residential applications. Demonstration results provide real-life experience and data on state-of-the-art SSL product performance and cost effectiveness. These results connect DOE technology procurement efforts with large-volume purchasers and provide buyers with reliable data on product performance.

Also, the DOE is requesting capability statements for the purpose of pre-qualifying laboratories to support CALiPER testing of commercially available SSL products. More information is available at the CALiPER Program website.

In a residential area of Oakland, fifteen 78-watt LED luminaires replaced 121-watt high pressure sodium (HPS) luminaires. All the luminaires were 28.5 feet above the road surface, with spacings of 110, 120 or 165 feet between luminaires.

A metered LED luminaire drew an average power of 77.7 W, some 35% less than the 121 W drawn by a metered HPS luminaire. With an estimated annual period of operation of 4100 hours, the annual saving is 178 kWh per luminaire replaced.

The HPS luminaires had a higher average illuminance than the LED alternatives; however, both types had the same minimum values. This does NOT denote inferior illumination performance from the LED luminaires, rather that these provide much more uniform illuminance. The HPS lamps produce a hotspot directly under the fixture; this area is overlit in order to maintain the minimum required levels at greater distances from the pole.

Also, the LED luminaires have a much lower lumen depreciation rate over life. Because the street lighting fixtures must maintain a minimum illumination level over the course of their life, this requires over-lighting at the start of life, and this requirement is more severe for the HPS lamps.

However, the situation was not as bright for the calculated payback period for LED luminaires (with the caveat that the calculations depend on many factors such as initial purchase price, installation-specific costs and energy costs.

For new construction, the report estimated that installing an LED luminaire cost an additional $500, and that payback (based on electrical and maintenance savings specific to the Oakland area) would be in the 11-15 year range.

For a retrofit application, where no initial investment is required for the HPS case, the situation is even worse, and it could take 20-25 years to pay back the full cost ($833) of the LED luminaires.

"Despite electrical savings, the present high upfront cost of LED street lighting luminaires may be a barrier to their current adoption," says the report. "To meet a simple payback of 2 years or less, the cost of an LED luminaire would need to be on the order of $250 in the new construction scenario."

The payback numbers are suprising, and do not match other reports and case studies, which tend to point to a payback in the 2-3 year region for LED streetlights. Obviously, there are many variables involved. For example, the report assumes a fixed energy cost, while clearly a rising energy cost over time would be favorable for the more energy-efficient LEDs.