A Stuttgart classroom taps a Li-Fi prototype from Fraunhofer. 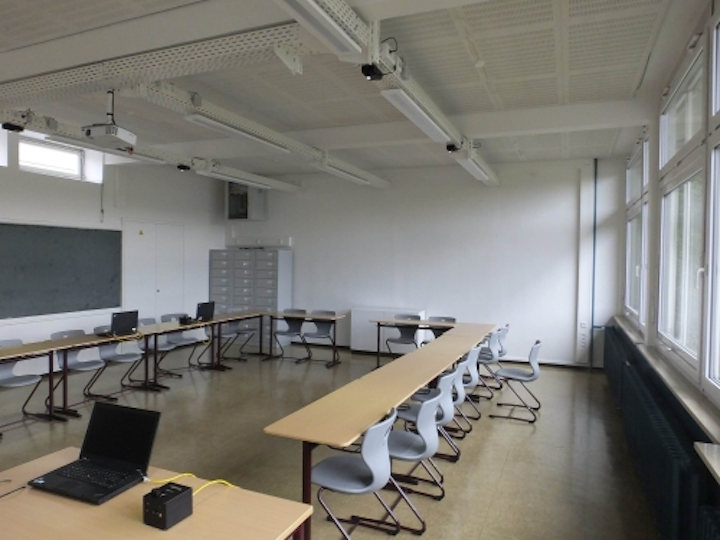 The idea of using LED ceiling lights to transmit Wi-Fi-like Internet signals continues to move slowly forward, as a German high school is deploying a prototype Li-Fi system in a specially equipped classroom to deliver lessons to students' laptops.

Interested in articles & announcements on networked lighting and Li-Fi?

The school in Stuttgart, called Hegel-Gymnasium, is using the room to teach a broad range of subjects — everything from history to information technology. Five ceiling lights send wireless signals to small tabletop boxes, which then transmit to laptops via Ethernet cable. Each light covers 2m2, and each box can support up to four laptops or other devices.

Li-Fi, short for light-fidelity, is a two-way form of visible light communication (VLC), an emerging technology that uses invisible modulations in LED light frequencies to embed data. Proponents say that it will open up a vast amount of spectrum that will be needed as Wi-Fi waves saturate. Wi-Fi is a radio technology.

Li-Fi enthusiasts also note that Li-Fi is not susceptible to interference the way Wi-Fi is (although Li-Fi requires line of sight), it does not emit electromagnetic radiation, and it is more secure.

The Li-Fi experiment at Hegel-Gymnasium marks a technological leapfrog for the school, which has yet to install Wi-Fi. Hegel is using the “VLC classroom” in hopes of delivering more engaging and interactive lessons. 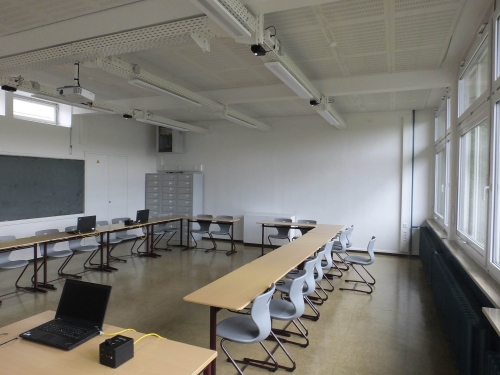 Boxed out: In Fraunhofer's prototype Li-Fi installation at the Stuttgart school, lightwaves from LED luminaires wirelessly carry data to boxes that are wired via Ethernet to laptops. Fraunhofer hopes to move the box's electronics onto a dongle, similar to what pureLiFi is doing. Eventually, the chips should reside inside laptops, phones, and tablets.

“We are happy that our students are involved with a sensational research project, which is concerned with high-speed data communication without electromagnetic interference,” said Hegel principal Frank Bäuerle. “Our teaching staff and students will gather experiences on the level of sophistication of the Fraunhofer HHI VLC-modules, as well as on which pedagogical concepts make sense with this technology. In this way, we will be able to assist in the identification of future technological development.”

Translation: The school is kicking the tires on Li-Fi and will provide insights that will help Fraunhofer improve the technology so it is more prime-time ready. It will also help tailor it for classroom settings.

Fraunhofer began developing the classroom earlier this year and will use the deployment to further troubleshoot Li-Fi and move it out of what Fraunhofer called the “prototype stage.”

One thing holding back Li-Fi is that device manufacturers have not yet embedded Li-Fi chips inside phones, tablets, and laptops, whereas they long ago began embedding Wi-Fi.

As a step in that direction, the battery-powered “VLC tabletop boxes” (see photo) that Fraunhofer uses at the Stuttgart high school will eventually give way to dongles — USB sticks that attach to laptops to act as Li-Fi transmitters and receivers.

One Li-Fi vendor, Scotland's pureLiFi, said last month that it has now shrunk its chipsets small enough to fit inside devices, although its latest system continues to place the chips on an attachable dongle, rather than inside a device. PureLiFi told LEDs at the time that it will probably take two to three years before device vendors embed Li-Fi.

“There are still some technical issues to tackle,” said Paraskevopoulos.

Another issue that Fraunhofer is wrestling with is how to support roaming when a student moves from under one light to under another.

“This is not included in our prototype systems yet,” Paraskevopoulos said. While one luminaire can support many users, it cannot take an ongoing interaction over from another luminaire.

“The reason why this has not been achieved yet is related to the fact that we try, as far as possible, to implement off-the-shelf components,” he explained. “The link management chips we are using do not cover this scenario — yet.”

While Fraunhofer's Li-Fi has a shorter range than Wi-Fi, that can be an advantage, because Wi-Fi's range is what can often cause different Wi-Fi networks to clash, he added.

Paraskevopoulos was optimistic about the future for Li-Fi.

“There are still some technical issues to tackle,” he said. “As a Fraunhofer institute, we try to push prototyping as far as it goes, and then work towards a product development together with industry partners. The most probable scenario would be that a lighting system provider will take up this technology, or a startup will try to commercialize the technology.”

The classroom is part of a €500,000 ($579,000) information technology improvement scheme for schools financed by the city of Stuttgart.

Li-Fi will feature prominently at the LuxLive 2017 exhibition and conference on Nov. 15 and 16 in London, where Internet of Things (IoT) lighting will take center stage.