Finite-difference time-domain simulation in 3D is necessary to verify the light extraction efficiency of LED architectural enhancements, but a faster 2D method can allow for quicker iterations for testing new ideas during product development, write Chenglin Xu and Dan Herrmann. 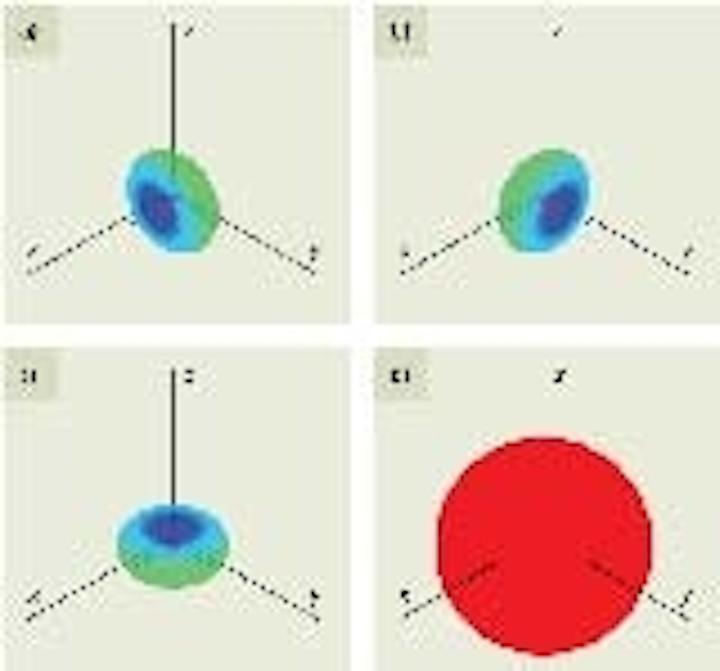 LEDs, which began appearing in very limited applications more than 50 years ago, are now widely used for numerous applications, predominantly in the solid-state lighting (SSL) and display markets. Despite their widespread popularity, LEDs still exhibit some performance issues, the most notable of which is low extraction efficiency. Scientists and engineers are trying many approaches to increase the extraction efficiency with chip-level architectural enhancements, although traditionally it has been a slow iterative process. New 2D optical simulation techniques, however, can closely approximate real 3D analysis of point light sources and allow the engineers to test new ideas much more quickly with far less computer power and resources.

The limited extraction efficiency of LEDs is due to the fact that the light is generated inside media with a high refractive index and that total internal reflection occurs at the air interface. As a result, only a small portion of the light within the cone formed by the critical angle can be extracted into air, and the majority is trapped inside. The theoretical limit of the extraction efficiency is 1⁄4n2 (where n is the refractive index of the medium), which is only about 2% for GaAs-LEDs and 4% for GaN-LEDs.

To break through the theoretical limit, researchers are trying to manipulate the LED structure to extract more light. To accomplish this, many researchers rely on a trial-and-error approach to the design process. For example, S. David Roh from LG Innotek reported iterating as many as several hundred times in a paper at the Asia Communication and Photonics Conference last year. Although most designers may acknowledge that simulation software can reduce the design cycle and save time and money, not all designers use simulation tools in their practical design, perhaps because of the complexity of LED simulation problems or because they have not yet found an efficient, user-friendly simulation tool.

It is well known that an LED is an incoherent and randomly polarized light source. It is temporally incoherent, spatially incoherent, as well as polarization incoherent. To deal with the complexity of the problem, we have to simulate the 3D structure by a finite-difference time-domain (FDTD) method at every position, every wavelength, and every polarization, and then sum the results of each simulation incoherently. To automate this complicated simulation process, RSoft (now part of the Synopsys Optical Solutions Group) developed the LED Utility that runs on top of the FullWave optical simulation tool.

Still, a full 3D FDTD simulation is very expensive in terms of computation time and computer memory. One simulation for a typical LED structure could use tens of gigabytes of RAM and take a few hours on a multi-core computer. For multiple scans over wavelength, position, and polarization, it is very common for a simulation to take a few days.

To increase efficiency and make the simulation more affordable, we recently proposed and briefly reported a simplified approach in a paper at the Asia Communication and Photonics Conference. Instead of simulating a full 3D structure, we assume that the LED device is circularly symmetric so that we can perform a 2D radial simulation. The simulation effort, including both computation time and computer memory, can be reduced by hundreds or even thousands of times.

Let’s first consider the typical simulation procedures and then our simplified 2D methodology. Photons generated inside an LED by injected current are completely independent of each other, with random phase variations and polarizations. Hence, the LED light source is unpolarized as well as spatially and temporally incoherent. The cost of including incoherence via a Monte Carlo approach in an FDTD simulation, the most commonly used method for LED simulation, is very high. The time scale for a dipole’s phase variation is much larger than the optical period (T=2π/w) and would require prohibitively long simulations. A better approach is to analytically create the unpolarized and incoherent source by combining simulations of individual dipoles.

Unpolarized light is uniformly polarized in all directions. To create such a source, we can separately simulate the three orthogonal polarizations and sum the results. Shown in Fig. 1 are the far fields (also called radiation patterns) of a dipole polarized in three different directions, as well as the sum of all polarizations.

The phase variation of each generated photon is independent of other photons and takes place on a time scale that is too long to model. Simulating multiple point sources together maintains a fixed phase difference between the point sources and results in a coherent simulation. Therefore, multiple point sources must be simulated separately to obtain spatially incoherent results.

The temporal coherence of light, which is measured by a coherent length, is inversely proportional to the spectral width. Due to the dominance of spontaneous emission, as shown in Fig. 2, an LED has a much wider emission spectrum than a laser. The extraction efficiency and radiation pattern of an LED are wavelength dependent, as shown for a simulated example in Fig. 2.

The final extraction efficiency R and far-field pattern ψ(θ,φ) can be obtained by averaging the wavelength-dependent results R(λi) and ψ(θ,φ,λi) at each sampled wavelength λi, weighted by the LED radiation spectrum S(λi), that is,

where N is the number of the sampled points. The combined results are shown in Fig. 3.

As described in the previous section, a full 3D FDTD simulation of an LED structure involves scanning over wavelength, position, and polarization and can require a significant amount of computer memory. The computer resource issue is especially a problem for a patterned structure for which a much larger simulation domain is required. Patterned structures are being increasingly used in LEDs to improve light extraction. Fig. 4 compares flat and patterned structures. In a patterned structure, the trapped light could be extracted by the gratings while it propagates in the lateral directions. By comparison, a flat structure needs a much smaller computation domain, as long as it is large enough to cover the light cone formed by the critical angle.

For a typical 3D structure, a full simulation based on the preceding procedure could take a few days with tens of gigabytes of memory in order to obtain reasonable results. Such a simulation certainly limits the ability of design automation. Is there a more efficient way to simulate LEDs, even if it is an approximated method? The answer might be 2D approximation, which is appropriate for most photonic device simulations. For LEDs, however, 2D approximation oversimplifies the problem.

As shown in Fig. 5, the 2D approximation changes the problem completely. It turns a 2D photonic crystal (PhC), a common, textured pattern for enhancing extraction efficiency, into 1D gratings. Most importantly, it turns a point source into a line source. As a result, the 2D simulation overestimates the extraction efficiency and projects a radiation pattern that is significantly different from the 3D results.

We can improve the 2D results using a radial approximation. The commonly used 2D PhC patterns, either hexagonal or square lattices, are approximations to circular Bragg gratings, which create bandgaps in the lateral directions to force the trapped light to travel in a vertical direction. Therefore, 2D radial approximation is closer to the real problem geographically, as shown in Fig. 6.

Still, a 2D radial simulation is a good approximation to real 3D LED problems, and it produces results that are similar to those of a 3D simulation. The computation effort, for both time and memory, is usually several orders of magnitude smaller. A 3D simulation for a typical LED structure could take a few days and use tens of gigabytes of memory, and a 2D radial simulation takes only minutes and uses very little memory.

In conclusion, we developed a general simulation procedure for an LED structure that can handle an unpolarized and incoherent light source. To improve simulation efficiency, we demonstrated a 2D radial simulation of 3D LEDs that can reduce the complexity of the simulation task by hundreds or thousands of times. Using a tool such as FullWave and the LED Utility, engineers can quickly test ideas for new LED architectural structures that can improve extraction efficiency.

Although it is an approximation, the 2D method can still provide design insight and prove the design concept quickly. We do not expect that 3D simulation could be completely replaced by 2D radial simulation, as 3D simulation still serves as a verification tool for the final design. Also, the LED Utility can be used to perform 3D simulation as the LED designer closes on an architectural development project.

Networks and smart lighting remained in the spotlight at LightFair 2016, but Maury Wright reports that lighting designers and specifiers may still care more about the quality of LED-based products than value-added, lighting-centric features.
Maury Wright
Jul 22nd, 2016

An ANSI-accredited standards group within NEMA is publishing a standard describing the parameters and characterizations required on LED datasheets, reports Jianzhong Jiao, and the result will allow developers to more easily contrast and compare LEDs from multiple vendors relative to specific application requirements.
Apr 28th, 2016

Choice of materials takes the heat out of LED packaging (MAGAZINE)

John Cafferkey examines the most effective packaging options for thermal management in high-power LEDs, including a detailed look at the most common LED architecture and package types.
Apr 28th, 2016

Conference speakers largely agreed that the race to the bottom price-wise is inevitable in LEDs and lighting, reports Maury Wright, but ideas for new value-added applications and services that can deliver prosperity to the SSL sector abound.
Maury Wright
Apr 28th, 2016

Maury Wright and Carrie Meadows report on the 47 solid-state lighting and enabling technology finalists that are under consideration for Sapphire Awards honors in March, in addition to the honor of 'Illumineer of the Year' for a recent brilliant innovation.
Maury Wright
Feb 19th, 2016

Now more than ever, innovators in the SSL sector need to move quickly to protect their LED-centric intellectual property given the AIA legislation in the US, reports Marshall Honeyman.
Feb 19th, 2016

LEDs have already assumed a huge presence in the globally installed base of lighting products, but the bulk of the growth is yet to come.
Jan 26th, 2016

We have long watched the interest in alternative LED substrates to sapphire and silicon carbide in terms of a technology and manufacturing platform.
Maury Wright
Dec 7th, 2015

After spending significant money and resources on developing GaN-on-Si LED technology, Toshiba will evidently no longer pursue the white LED business and plans to shutter the organization by the end of this year.
Maury Wright
Oct 28th, 2015

The IES is considering feedback from the LED industry on projection methods for testing and defining additional long-term behavior changes in LEDs that are not addressed in the current version of TM-21. Jianzhong Jiao describes possible models and updates under investigation.
Sep 16th, 2015