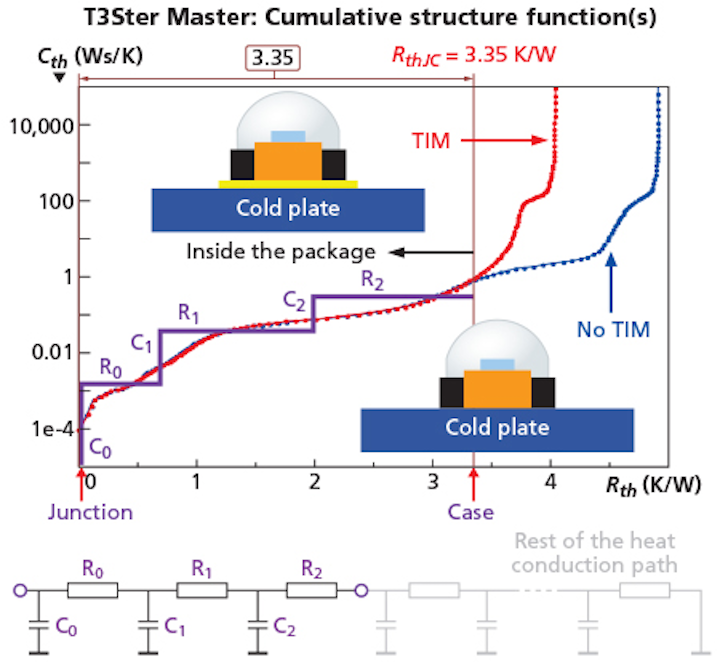 Many factors contribute to light output degradation of an LED, down to almost nano-scale issues at the active region of the LED die to thermo-mechanical stresses in the semiconductor crystal and at the different interfaces between the material regions. All of these physical processes that contribute to aging of LEDs are thermally assisted — the speed of the aging processes exponentially depends on the temperature. Understanding the temperature effects is paramount to developing robust and reliable solid-state lighting (SSL) products.

Even in a good device, the light output drops with temperature. At higher temperatures, an LED device becomes less efficient. If the die-attach region of an LED starts delaminating, the process may speed up in time: Delamination causes higher thermal resistance, which causes even higher junction temperature, possibly further contributing even further to delamination — like an avalanche.

A good LED is well-designed in every detail: On the die level, the fine structure of the active layer is well-optimized; the light is generated with high efficiency in the p-n-junction; it is extracted with high efficiency from the semiconductor crystal; thermal expansion coefficient mismatches are properly handled; the thermal resistance is minimized; the phosphor has high conversion efficiency; the temperature dependence of this efficiency is minimized; materials used in the encapsulation are stable; the optics remain transparent; and it is not sensitive to short-wavelength radiation, heat, and aggressive chemicals that might be present in the close atmosphere within the luminaire.

From the reliability point of view, even a simple LED device is quite complex. Many inter-related processes contribute to its aging. The change of the junction-to-ambient thermal resistance is a good lumped indicator of how the aging of the LED has progressed or will progress.

In reliability and lifetime testing, the typical protocol is that the device under test is first subject to some stress conditions. In HAST (highly accelerated stress testing), for example, power cycling or temperature cycling is used to speed up the aging processes; and after stressing has elapsed for a certain time, analysis techniques are used to look for possible failures.

Thermal transient testing combined with the use of structure functions is an in-situ and non-destructive post-stress analysis technique. (Structure functions are the thermal capacitance-thermal resistance maps of the junction-to-ambient heat-flow path; the shape of the structure function depends on the thermal properties and the geometry of the subsequent sections of the heat-flow path. For details on structure functions, see the original paper of V. Székely, consult Annex A of the Joint Electron Devices Engineering Council (JEDEC) JESD 51-14 standard1, or see Sections 4.4.4 and 4.4.52.) With this type of testing, stressing can be interrupted and a thermal transient measurement can be taken at a certain time during the aging process, and then the stressing process can be continued. This process is also advisable during LED lifetime and reliability tests, either following the standard LM-80 aging protocol or any other HAST-type aging protocol applied to LEDs. When used as a pre- and post-stress testing method, such measurements provide good means of failure analysis, contributing to the design and manufacture of more reliable and better quality LED-based products.

Fig. 1 presents the basic concept of thermal transient testing of LEDs. The test equipment forces a stepwise change in the heating power of the LED under test and measures the transient response of its junction temperature. Normalized by the change in the heating power this curve is called the Zth(t) thermal impedance curve. After post-processing, the thermal impedance is turned into alternate formats that can be used to represent the thermal behavior or thermal properties of the LED's junction-to-ambient heat-flow path for a particular purpose.

For example, the complex locus is a format best suited to describe the thermal impedance of AC-driven LEDs; the pulsed thermal resistance diagrams are well-suited to describe how LEDs would thermally react when dimmed via pulsewidth modulation; structure functions provide non-destructive means of failure analysis; and even a dynamic compact thermal model can be created to represent the LED package during a luminaire-level computational fluid dynamics (CFD)-based thermal simulation.

The step-wise approximation of the structure function (Fig. 2) is a natural extension of the data-processing part of the JEDEC JESD 51-14 compliant transient RthJC measurement method, as implemented by Mentor Graphics in the T3Ster Master data-processing software used to evaluate measurement results obtained by the thermal transient test equipment T3Ster. This software is also equipped with an interface that propagates such test-based dynamic compact models to be used in 3D CFD-based thermal simulation tools such as FloTHERM or FloEFD.

Researchers from the University of Pannonia and the Budapest University of Technology and Economics in Hungary pioneered the use of thermal transient measurements of power LED packages during LM-80 compatible aging tests. In a recent thermal-only study of the latest LED die-attach issues, they found problems in about 13% of the LEDs purchased through usual commercial channels, which pointed them to the need for testing LEDs in production. The same type of LEDs used in an automotive head-light module showed the same rate of die-attach problems.

They noted that the light output degradation of LEDs measured during LM-80 compliant aging was strongly correlated with degradation of the quality of the junction-to-ambient heat-flow path of the LED product tested3 (Fig. 3). The observed changes included delamination of the attachment of the LED package to the substrate (a metal-core printed circuit board, or MCPCB, in this case), as well as degradation of the thermal conductivity of the thermal interface material (TIM) used in the test setup. The corresponding increases in the interfacial thermal resistances were indicated by the elongation of flat regions of structure functions.

The diagrams in Fig. 4 show the results of thermal transient testing of 15 randomly selected samples of a recent high-end power LED purchased from a distributor of a well-recognized LED vendor. In Fig. 4a, for two samples out of the lot of 15, the measured thermal impedance is significantly higher already 10 msec after turning the power on. This time range is characteristic to the die-attach region. The conclusion that the increased overall steady-state thermal resistance of these two samples was caused by the increased die-attach thermal resistance is confirmed by the structure function shown in Fig. 4b. These results highlighted the importance of testing the die-attach quality during production.

However, such in-line testing of die-attach quality in LEDs raises a number of questions. First, complete steady-state to steady-state thermal transient measurements are not feasible to meet the speed requirements of the production lines. In earlier studies4-5, transient response to short (typically 10 msec) heating pulses already carries the necessary information about the die-attach quality; thus, test waveforms with an overall length of 80–200 ms are appropriate, depending on the actual thermal time-constant of the LED product to be tested. Such a timeframe corresponds to the throughput of production lines.

Another important issue is that, during in-line testing of LEDs there is no possibility to find the temperature sensitivity of the forward voltage of LEDs, as would be required by the standard laboratory testing of thermal properties. This problem can be solved by matching the initial part of the measured ΔVF(t) transients to the real Zth(t) curves in the initial section (in the 1–10 ms range) where the heat-wave generated by the short heating pulse propagated only in the LED chip itself and is not yet influenced by the quality of the die attach. A recent paper by T. Dannerbauer and T. Zahner6 provides more details on this technique. The key in such a testing solution is the accurate measurement of the early part of the forward voltage transient.

Thermal transient testing completed with structure function analysis helped distinguish between the increased thermal resistance caused by the die-attach issues of the incoming LED components and that caused by the imperfect soldering to the module's base plate.

Thermal transient measurements are useful not only in laboratory and production testing of LEDs and LED modules but they also provide valuable input to modeling of LEDs. When combined with radiometric/photometric measurements at the same time, so-called compact multi-domain LED models can be created. Using such models in the design phase of LED modules and luminaires allows proper thermal design and, through the hot lumens calculations, provides data about the foreseen optical performance of the final SSL product.

ANDRÁS POPPE is a co-founder of MicReD, now Mentor Graphics Mechanical Analysis Division, and supports marketing of the T3Ster and TERALED products. He is an active member of the JEDEC JC15 and CIE TC2-63 and TC2-64 standardization committees.