LEDs simulate sky in the ceiling of a government call center

The advantages of small size and high brightness, combined with creative installation, have enabled LEDs to recreate the sky inside and office building. 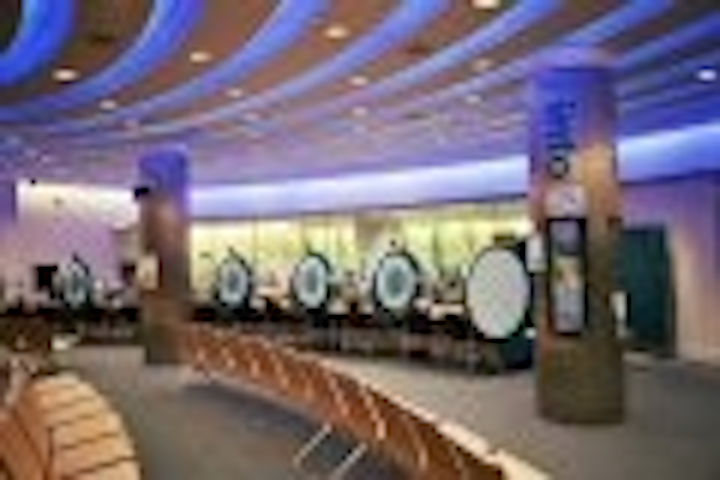 LED lighting has been used in the new customer service centre of a local government department in the UK, in a project that turns the entire ceiling into a bespoke luminaire that simulates the sky.

In the first project of its kind in the UK, Future Group Lighting Design and Light Projects were briefed to create a welcoming environment through the creative use of light, for both members of the public and call centre staff at Stevenage Borough Council offices.

To achieve this, architect Brian Martin designed a feature ceiling, consisting of a series of coffered arcs that conceal a specially-developed light solution. Using white and blue LEDs, a color-changing effect has been created that runs over the course of the day, simulating the sky and creating a feeling of light and space.

Key to the lighting solution are the luminaires, specially developed by the Future Group using 2,500 KlipLEDs from Light Projects. The KlipLEDs, which contain blue and white Luxeon I LEDs from Lumileds, were individually mounted on metal strips and press-studded together to form a flexible mechanical coupling, capable of running in a channel around the curved ceiling arcs.

"Vital to the overall effect of this project was the aspect ratio of the coffers in the ceiling design, which was only possible through the small size of the LEDs," said Peter Phillipson of Future Group. "The smallness and high brightness of the Luxeon LEDs ensured the lip detail needed to conceal them was kept to a minimum, allowing the architect to achieve the desired effect."

Phillipson says that the project shows just how far LED technology has come, with the small size and high power of LEDs creating an entirely new era of lighting solutions. "Without the use of Luxeon LEDs in this project, the arc design and final effect would not have been possible," he said. "Only a year or so ago, cold cathode would have been used, resulting in a larger lip detail and altering the aspect ratio."

Crucial to the success of the project is the fact that there are no LED drivers, tungsten halogen transformers or any serviceable components above the feature ceiling. This avoids the need for any trap doors that would impact on the overall design.

The drivers are all housed in a 19-inch rack in a plant room; the ELV cabling from the drivers to the LEDs is cut to length so there are no joints. The cables are each terminated with a tiny socket passing through specially positioned holes concealed behind the lip detail. This enables each driver to run three circuits each with between four and twelve LEDs in a balanced load.

Keith Scott, market development manager at Lumileds, said: "The use of Luxeon LEDs to create this feature ceiling demonstrates the incredible advancements designers are making in solid-state lighting. Solutions that weren't possible just a few years ago are now a reality thanks to Lumileds' continued advancement of LED technology and the commitment of companies such as those involved in the Luxeon Lighting Network."