The comprehensive tests included an evaluation of LED lighting in a performance dance venue, an acting studio, and dressing rooms documenting both energy savings and lighting quality. 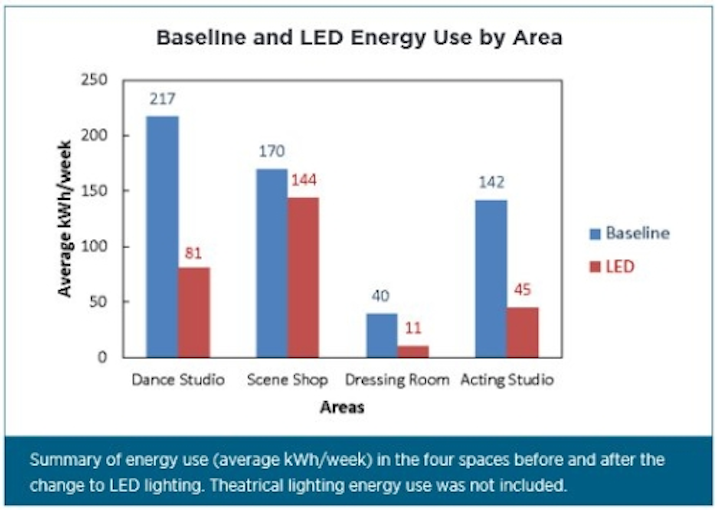 The US Department of Energy (DOE) has published a Gateway report documenting comprehensive testing of LED lighting at the University of Florida Nadine McGuire Theater + Dance Pavilion. The 46,000-ft2 facility afforded the researchers the opportunity to test solid-state lighting (SSL) products in numerous scenarios ranging from a performance venue to dressing rooms. The LED-based lighting was judged to improve the overall quality of lighting while delivering significant energy savings. 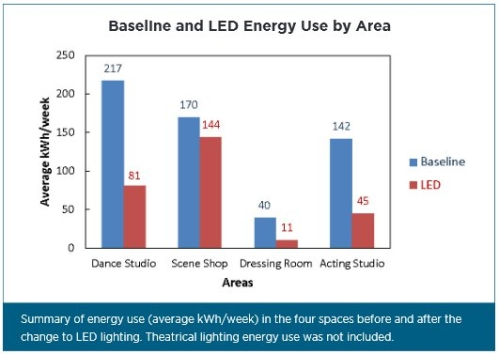 The performing arts venue included a wide variety of spaces affording the researchers a chance to evaluate many different types of lighting. The common theme was that the university facility is used for long hours daily, including evening classes, rehearsals, and performances, providing numerous opportunities for leveraging energy-saving SSL.

The project focused on four primary areas including a dance studio, an acting studio, a scene shop where props are built, and dressing rooms. The lighting retrofit was vastly different in each of the areas.

In the dressing room, the lighting surrounding mirrors was switched from G25 incandescent bulbs to A19 LED lamps with a high-CRI rating. The acting studio had been lit by 100W PAR38 ceramic-metal-halide (CMH) lamps and, because of the long restrike time of the CMH lamps, supplemented by temporary theatrical cyc (cyclorama) lights that used CFL reflector bulbs. The retrofit uses 39W LED PAR38 downlights and 4-ft linear LED wall-wash luminaires. The scene shop was originally lit with T8 fluorescent luminaires and was retrofitted with 8-ft LED linear luminaires.

The dance studio was perhaps most critical from a quality perspective because it is used on a recurring basis for live performances. An array of 320W metal-halide (MH) low-bay luminaires provided day-to-day lighting and operated on a near-continuous basis. Portable 575W halogen lamps were used to sidelight performances. After the retrofit, GE Lumination EL Series luminaires, with light guides that extend vertically from the fixture, provide the primary lighting with LED theatrical lighting used for performances.

The nearby graph depicts the energy savings realized by the retrofit in all areas other than theatrical lighting. In aggregate the retrofit saves 418 kWh per week, representing a reduction of 73%. Still, the project would not be judged a success if the lighting quality wasn't judged favorably by students, instructors, performers, and performance attendees.

The LED lighting in the dressing room was considered as good as the legacy lighting by performers. And the group positively noted the reduction in radiated heat from the LED lamps. Users in the scene shop noted more uniform lighting, which is key in terms of safety for the students and instructors working with power tools. Moreover, the shop had been plagued by burned-out lights and that should not be an issue going forward.

Performers using the acting studio greatly preferred the new lighting and noted the superior uniformity. In the dance studio, the day-to-day lighting was judged to improve the visibility of dancers' form and improved skin tones. During performances, audiences judged the before and after theatrical lighting as near identical although the LED implementation delivers 50% to 90% energy savings during performances.

LED lighting is still a relatively new option for performing arts venues, although we have covered some examples in well-known concert halls, theaters, and arenas. For example, the Stockholm Concert Hall was retrofitted with LEDs earlier this year. Moreover, LED lighting can serve as both functional and emergency lighting in venues such as the iconic Wembley Arena.

The full DOE Gateway report on the University of Florida project is available on the agency website. The research joins other notable Gateway tests of actual SSL installations such as a Kansas City street light installation and an indoor test of LED-based replacement tubes for T8 fluorescent tubes.