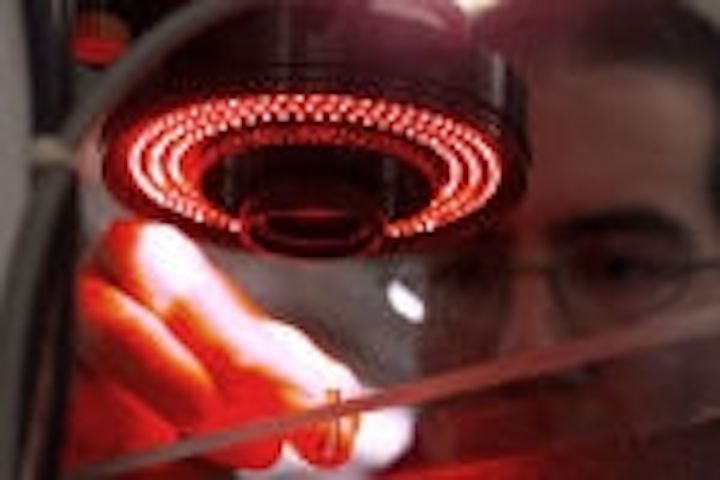 Machine vision is the application of computer vision to factory automation. Machine vision systems use digital cameras, lighting and image processing software to perform inspections that would be traditionally undertaken by human inspectors. It is important to capture high quality images as the computer makes a decision based on analysis of these images.

Why and how are LEDs used?

One of the most crucial aspects in machine vision is the selection of the correct lighting. For many years, fibre-optic lighting combined with a halogen light source provided the best solution. However, LEDs have evolved and their price/performance attributes have improved, leading to even more reliable and more consistent performance in machine vision applications.

Since machine vision cameras are not as sensitive as the human eye, it is necessary to use accurate lighting to highlight the features. For machine vision it is important that there is adequate intensity, that you can control the intensity and that the light is very uniform over the area of interest. Currently, LEDs are used in virtually all machine vision applications to illuminate the subject.

There a number of techniques used to light the subject, and they all require the LEDs to be arranged in various ways. These include:
- Ringlights for mounting around the camera lens to provide even, shadow-free front illumination.
- Backlights that provide even illumination from behind to show up features such as edge defects.
- Lightlines, which provide an intense uniform line of light, such as required in line-scan camera applications.
- Dark-field ringlights, which emit the light at a shallow angle, and are useful when looking for defects such as scratches.
- Coaxial lighting which only allows the directly reflected light to enter the camera; this is good for shiny surfaces etc.

Advantages over other light sources

In the past, the most popular approach was to use a halogen light source combined with fibre-optic light delivery to position the light as necessary. Major disadvantages are the need to replace the bulb every 1500 hours and the rapid degradation in light intensity. The lifetime of a red LED is typically 100,000 hours, and as they are the most popular colour they are the least expensive. Red LEDs are also the best for monochrome machine vision applications, since they correspond with the peak sensitivity of the camera’s CCD sensor.

LEDs are also suitable for colour applications as a full range of colours are available. White LEDs have similar benefits over halogen light sources but the lifetime is around 50,000 hours. White LEDs tend to vary in colour between manufacturers as they are based around blue LEDs with a phosphor coating. This causes colour variations which can be a problem in certain applications, when the need to replace the LEDs arises.

In applications which require larger back lights and light lines, it is very hard to get enough light down the fibre. When using LEDs you can simply use more LEDs and make sure you remove the heat efficiently.

The initial cost for a stable light source and fibre optic attachment is roughly the same as an equivalent LED array. Therefore, in terms of cost/hour, LEDs are far less expensive than anything else that provides equivalent stable lighting. With the use of a suitable controller, LEDs are very easy to strobe, increasing the life and output intensity. There is also no restriction on cable length.

Phlox designs and manufactures extremely uniform backlights utilizing their patented technology. The backlights consist of a specially engraved PMMA material, with precisely located LEDs around the edge to illuminate the area. The result is uniformity of +/- 3% and luminance up to 30 000 cd/m2. This is 6.5 times brighter than a fibre-optic backlight combined with a 150W halogen light source. They are available in high intensity red or white, in a large range of sizes, and are only 8.5mm thick. V-Cubed has a range of high brightness LED light lines using Luxeon III emitters, which require water-cooling due to the need to dissipate 400 W/m of heat. The result is a very uniform line of light, with a brighter output than the fibre-optic equivalent. A model using the red/amber Luxeon III is also available, providing even more intensity for monochrome applications.

Improvements in white LED technology would provide the greatest benefit to machine vision applications. If the lifetime and colour consistency could be improved they would completely remove the need for halogen sources.

Although today’s LEDs are bright enough for most applications, brighter LEDs would be useful for lightlines and larger scale applications. More efficient LEDs would also bring great benefits, including a reduction in the need to remove dissipated heat.