Just when it was turning a corner, US retailers and other factors rained on the parade. 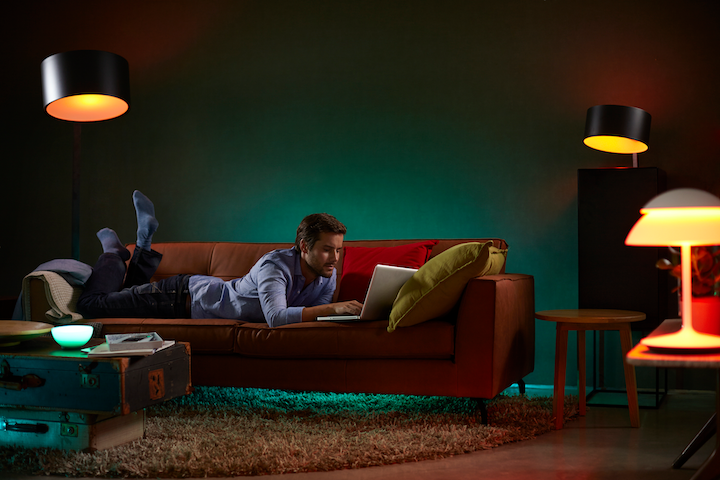 Home products like Hue have ambience, but in the third quarter US retailers demanded terms that Signify was not willing to offer, damaging business. (Photo credit: Image courtesy of Signify.)

Signify reported a setback in its journey out of the financial woods today, as the world’s largest lighting company reported that profits for the third quarter ending Sept. 30 tumbled by 20.1%, and warned that profits will not improve for the year as much as previously as expected.

“Due to the challenging macro environment that we are currently facing, we have revised our outlook for 2019,” CEO Eric Rondolat said in a phone call with analysts this morning. “We remain confident we will be able to improve the adjusted EBITDA margin for 2019, however, somewhat less than the ambitious level we had set previously. We now expect the EBITDA to be in the range of 10.3% to 10.6%.”

Despite Rondolat’s “somewhat less” characterization, Morgan Stanley analyst Lucy Carrier described the profit revision as “substantially below” the previous EBITDA margin outlook, which had stood at between 11% and 13% ever since Signify — then called Philips Lighting — spun out from Royal Philips with an IPO in 2016.

Rondolat blamed the downturn on a number of factors, including on US retailers who imposed unacceptable terms that Signify refused; on an unexpected slowdown in India; and on Europe’s ban on halogen bulbs, which are an important part of Signify’s conventional lamps business. He also said the German market, a significant one for the company, was difficult.

In the US, retailers of Signify’s home products including its Hue line made new demands including price matching, 100% returns for a full year, and margin guarantees.

“These are things that we do not do,” Rondolat explained. “We refused these conditions.” The result: Major retailers stopped buying Signify goods. The impact was significant because the North American market is characterized by a few large retailers, as opposed to a wider basket of retailers in Europe.

Rondolat said he expects to resolve the situation.

In India, Rondolat said the downturn is affecting many companies and that it probably will not improve until the middle of 2020.

The EBITDA margin revision echoed a couple of financial warnings that Signify had issued in 2018’s second and third quarters, albeit warnings related to sales, not margins.

Since then, starting with 2018’s fourth quarter, Signify appeared to be turning a corner, until today’s profit decline and revision.

While revenue has been steadily slipping for some time, the company has been able to offset the effect with ongoing restructuring, but in the third quarter the cost of restructuring rose, undermining profits.

Ongoing cost cutting measures include steady job reductions and supply chain changes. The company had 27,337 employees at the end of the quarter, down from 28,144 the previous quarter. Going back to the first quarter of 2018, its headcount was 31,615.

In one recent supply chain maneuver last July, Signify agreed to acquire 51% of privately-held Chinese LED lamp and luminaire provider Zhejiang Klite Lighting Holdings Co., Ltd. Rondolat said terms of the agreement still prevent him from revealing how much Signify is paying for the company.

Cost cutting will not include compromising on product quality, Rondolat said. For instance, he noted that Signify will not use recycled plastic in its lamps, as it can crack, nor will “overdrive” LEDs — the practice of using fewer LED chips to produce a desired amount of light.

These are corners cut by low-cost manufacturers, a group which is due for a shakeout, Rondolat said.

In the third quarter, sales in the professional group rose 3.5% to €698M ($773.5M) while income from operations (EBIT) rose 27.1% to €63M ($69.8M), marking a good sign for Signify, as this group is one of the company’s hopes for growth and includes Internet of Things initiatives in which “we are gathering data and trying to monetize data,” Rondolat said.