The long-awaited spinout of Philips Lighting occurred by IPO on May 27, 2016 on the Euronext Amsterdam exchange with pricing in the middle of the projected share range, and shares rose moderately through one week of trading despite some pundits predicting a fall in the market. 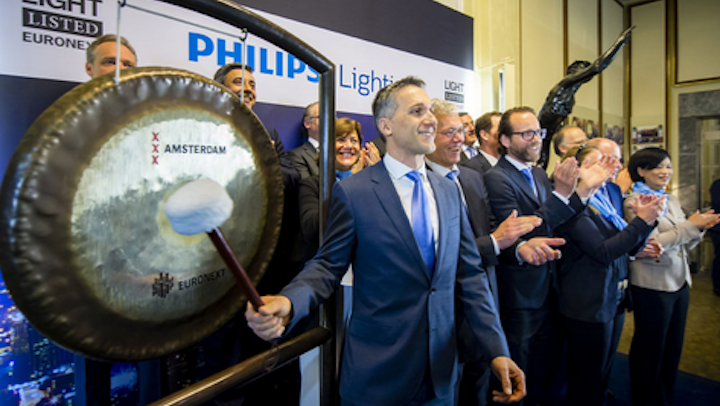 The long-awaited spinout of Philips Lighting occurred by IPO on May 27, 2016 on the Euronext Amsterdam exchange with pricing in the middle of the projected share range, and shares rose moderately through one week of trading despite some pundits predicting a fall in the market.

We have written repeatedly about the planned divestiture of Philips Lighting (LIGHT: Euronext) by Royal Philips, and while progress in the sale long seemed slow, the initial public offering (IPO) came on May 27 on the Euronext Amsterdam exchange with little warning. Parent Philips sold 37.5M (million) shares at EUR 20.00 ($22.35 on May 27 according to Reuters). Philips reported it had received EUR 750M in gross proceeds of the shares that represent 25% of Philips Lighting with the parent retaining the remaining shares. Reuters and others reported that the shares rose 8% on the first day of trading.

Philips first said it would divest the lighting unit in the fall of 2014. Six months later, the company first indicated that the sale would likely be through an IPO in 2016. Subsequently, however, there was much speculation in the industry that the sale would happen through a private equity transaction given market conditions. In the last month or so, however, Philips had again stated its intent for the IPO path with market conditions improving. 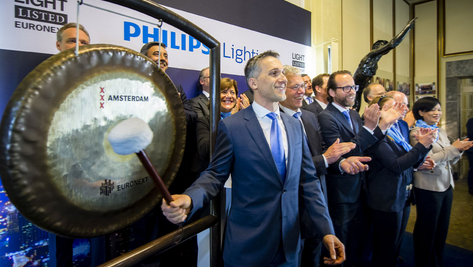 Philips Lighting documented the listing publicly on May 27. "Today with the listing of Philips Lighting as a standalone company on Euronext Amsterdam, we begin a new chapter in a long history of innovation and global market leadership that started in Eindhoven 125 years ago," said Eric Rondolat, CEO of Philips Lighting (shown). "Our listing is a historic milestone and testimony to the hard work of our employees, who are supporting the expansion of our global market-leadership by helping to drive the transition to LED and connected lighting systems and services. We welcome our new shareholders and thank them for their trust in our strategy."

Philips Lighting issued press releases this week documenting the settlement and announcing itself as an independent company. Moreover, the company said Royal Philips has granted Underwriters an over-allotment option to purchase an additional 5.625M shares at the EUR 20 offer price over the 30-day period beyond May 27. Should that option be executed, the Royal Philips stake could drop as low as 71.25% of the company.

The prospectus for the IPO had suggested a share price in the EUR 18.50–22.50 range. The strike price fell near the middle of that range.

By June 1, the stock price had risen above EUR 22. But some analysts remain negative of the company's prospects. For instance, the website TheStreet.com posted an article quoting analysts from Jefferies that had rated the stock to underperform and projected a share prices of EUR 17.00.

At mid-day Friday Eastern time in the US, however, the stock had continued to rise. Indeed, the stock had nudged up near the EUR 24 mark with the European markets closed for the week. Moreover, Philips Lighting had issued its first major press release as an independent company pledging to sell 2 billion LED light bulbs by 2020 at a Clean Energy conference.