Like at Toyota Stadium, the company uses robotics to optimize the angles of its ArenaVision floodlights and reduce installation time. 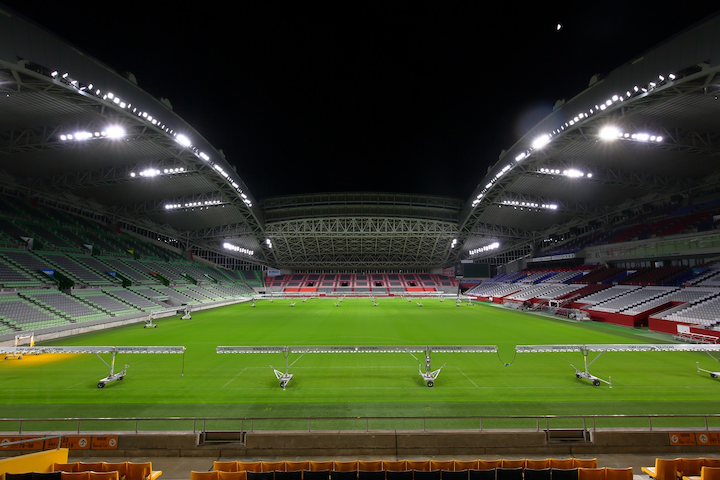 The new LED lights from Signify at Kobe Misaki stadium should help put the rugby action into a good light for 4K ultrahigh-definition broadcasts. The caged and wheeled LED grow lights in the foreground, which come from another lighting company, should also help the grass look green. (Photo credit: Image courtesy of Signify.)

Signify has lit up another major Japanese sports venue with LED field and entertainment lighting, again using robotic carts and laser scans to optimally position luminaires, this time at the Kobe Misaki Stadium.

Like the Toyota Stadium that Signify lit earlier this year, Kobe Misaki, in Kobe, will host matches for the Rugby World Cup, an every-four-years event that kicked off today, Sept. 20, in Tokyo with Japan defeating Russia, 30 to 10.

The first match in Kobe is Sept. 26, when the USA takes on England.

Sports stadiums are switching to LED lighting not only to save energy but also to support 4K ultrahigh-definition (UHD) broadcasting standards.

It first used the robotic approach at Toyota. In both instances, the method slashed installation time and reduced wear-and-tear on the grass compared to the conventional method of using a number of workers to do the same job.

Lighting-oriented turf care is not all up to Signify, however. To help nourish the grass, the city of Kobe, which owns the stadium, is using LED grow lights from another supplier, which mounts the lights on cages wheeled across field. Neither Signify nor Kobe had publicly identified the provider by the time this article appeared.

The new LED lights are expected to save about 45% on electricity costs.