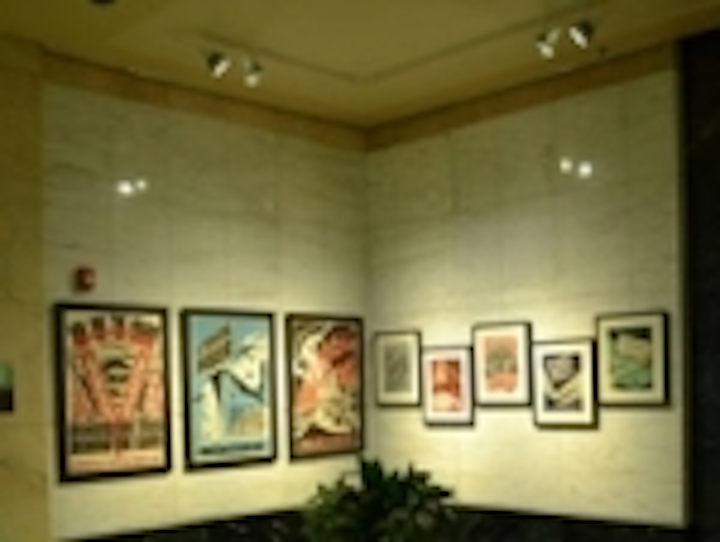 The US Department of Energy (DOE) has published the final Gateway report from a retrofit of 32 track lights used to illuminate artwork in the lobby of the Bonneville Power Administration (BPA) headquarters building in Portland, OR. During the demonstration, Cree 12W LED PAR38 lamps were installed in place of 15W and 23W reflectorized compact fluorescent lamps (CFLs), which had been installed in 2001. The study also compared CFL performance and cost to the original 90W halogen PAR38 reflector lamps.

The project results showed superior lighting quality and more-efficient energy use with LED lamps, yet with an 8-year payback period.

The project involved the illumination of historical black-and-white photos and printed color posters from the 1930s and 1940s. The PAR38 LED replacement lamps provide a narrower light distribution, concentrating the lumens on the artwork and minimizing the amount of light wasted on the wall above the art, which occurred with both the 15W and 23W CFLs.

Color temperature was around 2700K for all three lamps, but color quality improved with the LED lamping, from a CRI of 82 for the CFL to a CRI of 93 for the LED. The LED lamps showed improved rendering of red tones in architectural finishes and artwork compared to the CFL products.

Power quality also improved with the LED lamps, although that was a function of the electronic design of these particular lamps, rather than a feature of LED lamps universally. Power factor was 0.50 and 0.55 for the incumbent CFLs versus 0.94 for the LED lamp.

The study did not show rapid payback on the LED installation compared to the CFL products, considering the low electrical rates in the region because of the use of hydroelectric power ($0.0695/kWhr), the high cost of the LED lamps at the time, and the fact that CFLs are already a fairly efficient light source.

When life-cycle cost analysis was performed with more typical US electric rates, payback time was in the 7-8 year range compared to the 23W CFL.

This simple change-over to LED lamps has raised the visibility of the lobby’s historical photos and posters and improved their appearance.

Other recent Gateway studies have included one on T8 replacement lamps and another regarding LED replacements of parking lot luminaires at a Walmart as compared to pulse-start metal-halide luminaires.