Chromaticity shift remains one issue in LED-based lamps, and the US Department of Energy has added to its Caliper data on PAR38 lamps with research into SSL lamp design and parametric component failure. 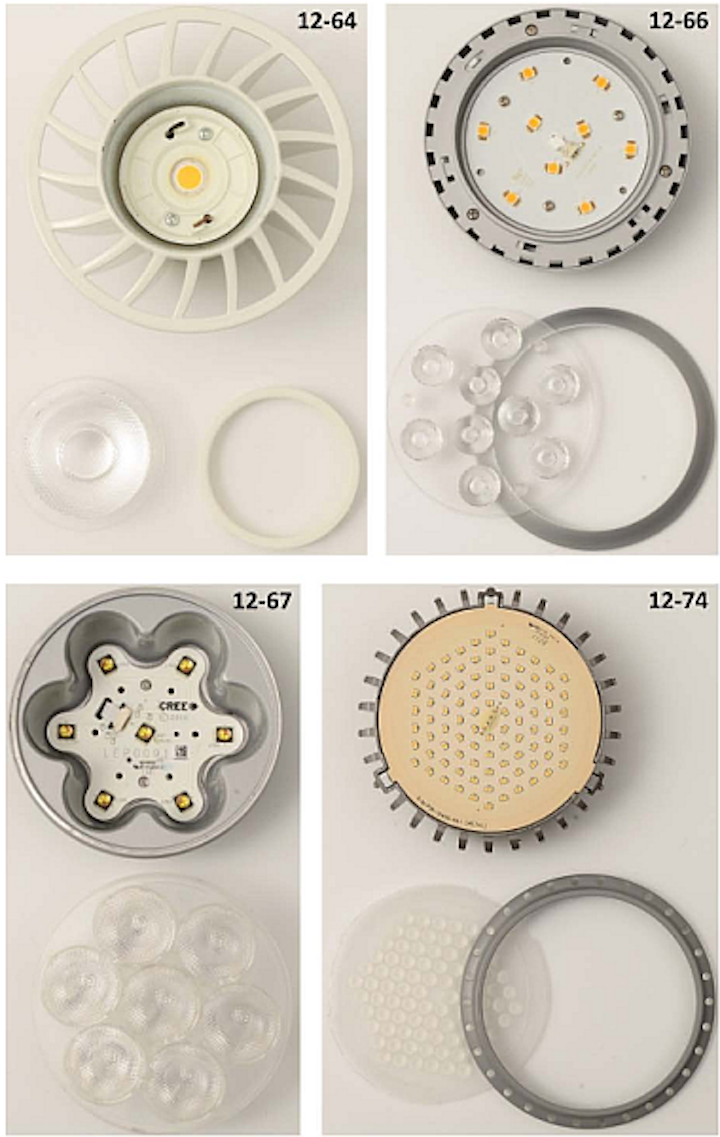 Chromaticity shift remains one issue in LED-based lamps, and the US Department of Energy has added to its Caliper data on PAR38 lamps with research into SSL lamp design and parametric component failure.

The US Department of Energy (DOE) has released Caliper Report 20.5 — "Chromaticity shift modes of LED PAR38 lamps operated in steady-state conditions." The new report is based on hands-on analysis of 32 LED PAR38 lamp models that have been under test at the Pacific Northwest National Laboratory (PNNL) and also long-term test results measured with a specialized test apparatus. The research has identified four phases of chromaticity shifts that have been described as chromaticity shift modes (CSM), which are chronologically consistent across all tested lamps although there were differences in timing and magnitude.

Report 20.5 is essentially an addendum in the Caliper 20 series that has been focused on PAR38 lamps. Most recently, the DOE issued Report 20.4 that looked at baseline lumen and chromaticity maintenance after 14,000 hours of operation. Now Report 20.5 delves even more deeply into the chromaticity topic.

Researchers from RTI International and PNNL conducted the latest round of testing and evaluation. There were two primary elements to the work described in the new report. First, the team further examined the data from the 14,000 hours of operation that was gathered for the prior report using a custom long-term test system called ALTA2. In this new analysis, the team concentrated on the spectroradiometric data gathered previously. Second, the team disassembled or performed a tear-down on the 32 models of LED PAR38 lamps tested. The tear-downs documented elements of lamp design including LED type, LED board temperature, and optical deign including secondary lenses and reflectors. 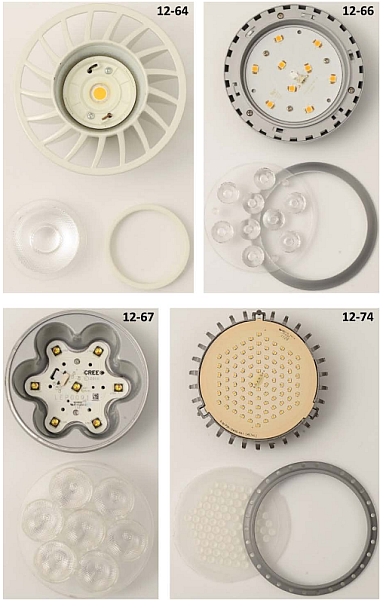 Generalizing, the report said the lamps "exhibited a systematic chronology in the chromaticity" although the details of the CSM phases depend on the design elements of each lamp type. The chromaticity data was characterized in the CIE 1976 color space with the u'v' (u prime and v prime) parameters. Generally, the lamps shift first in the blue direction (CSM-1), then in the green direction, (CSM-2), then in the yellow direction for a prolonged period (CSM-3), and finally in complex, sequential short-duration shifts in the blue, yellow, and blue directions (CSM-4).

As depicted nearby, the report considered vastly different lamp designs even in the case where each sample included a one-piece secondary lens. The nearby photo include a lamp with a single chip-on-board (COB) LED, a couple of models realized with a relatively small number of high-power LEDs, and a model realized with many mid-power LEDs.

The report said the characteristics of secondary lenses changed little over the long duration of the testing. That statement leads to the conclusion that any shifts are related to the behavior of the LEDs.

It's worth reviewing that Report 20.4 documented chromaticity shifts of ∆u'v' ≤0.007 in most of the lamps, thereby meeting Energy Star requirements. There is no widely-accepted standard for acceptable chromaticity shifts, but the earlier work considered the PAR38 lamps falling outside the Energy Star guidelines to have suffered parametric failure.

The new work does not add any data as to whether the observed shifts were acceptable to designers/specifiers. Instead, the work sought to identify the cause of the shifts and establish a potential methodology that can be used with other lamps and luminaires in chromaticity studies. Moreover, individual review of the data might provide some clues as to the type of PAR38 designs that fare the best, although that was not an apparent DOE goal.

You can review the exhaustive DOE report on the agency's SSL website. Moreover, you may want to review other reports in the Caliper 20 series. The initial report in 2012 covered photometric performance of new LED lamps along with products based on legacy sources. Subsequently, the DOE published additional reports including Report 20.2 that focused on dimming and flicker in PAR38 lamps. And later the agency published Report 20.3 focused on how well the LED lamps stand up to stress conditions.