The 1394-ft Carlin Tunnel in northeastern Nevada now features LED lighting in the eastbound bore with the westbound bore slated for completion by November. 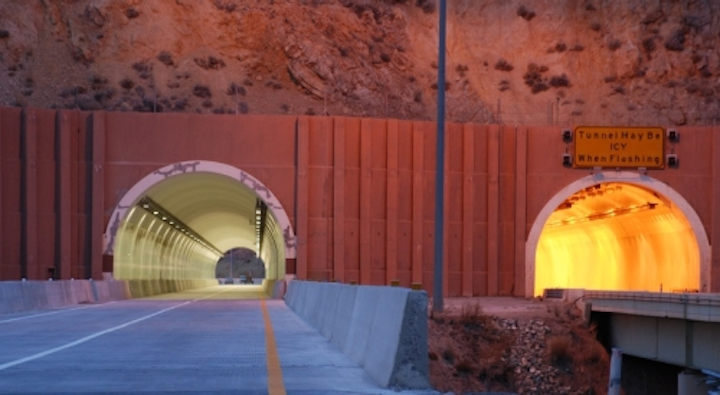 The 1394-ft Carlin Tunnel in northeastern Nevada now features LED lighting in the eastbound bore with the westbound bore slated for completion by November.

The Belgium-based Schréder Group has announced a US tunnel lighting project on Interstate 80 in northeastern Nevada. Solid-state lighting (SSL) fixtures have already been installed in the eastbound bore of the Carlin Tunnel, and the westbound bore will be completed later this year. The project also includes adaptive controls that allow the lighting to respond to ambient light levels and dim portions of the lighting when possible for maximum energy savings. 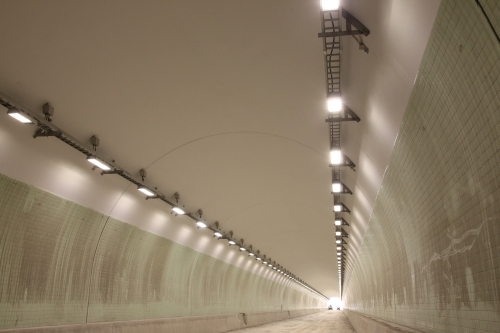 The tunnel project is part of a larger freeway improvement project that is being jointly pursued by both the Nevada Department of Transportation (NDOT) and the US Federal Highway Administration. The $31million project that covers the Carlin Canyon area will include seismic bridge retrofits, new pavement, and new LED-based lighting.

The transportation authorities were specifically concerned with improved safety in the Carlin Tunnel. The parties sought to find a lighting system that could deliver the requisite light levels but that also could be controlled in a manner to allow drivers a safe transition into the artificial light even at freeway speeds.

"The Nevada Department of Transportation's objectives for the lighting solution were a lower energy consumption, an effective control system and a tunnel that satisfies the IES RP-22-11 tunnel lighting standard at all times," said Justin Snowden, Schréder's tunnel and transit manager for North America. "NDOT was able to realize these goals using Schréder's FV32 LED."

The 1394-ft tunnel bores were previously lit with 1253 high-pressure sodium (HPS) fixtures with a mix of 100W, 150w, and 400W sources. The retrofitted bores will house about 789 LED luminaires. The nearby photo shows the HPS-lit westbound bore on the right in comparison to the retrofitted ore on the left. 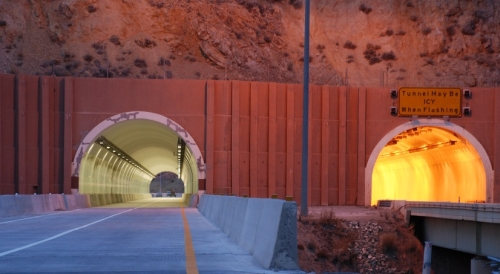 "Schréder was chosen because the FV32 LED luminaire — specifically developed for tunnel lighting — gave the best results in the 20 year lifecycle analysis," said Eric MacGill, roadway design manager at the PK Electrical engineering firm involved with the project. "Thanks to their performance, less luminaires were required to achieve RP-22 luminance levels in the Carlin Tunnel. Additionally, the FV32 LED proved intuitively easy to maintain: Its component-level maintenance allows for quick field replacements and easy upgrades if needed."

Schréder has touted the project as the first all-LED-lit freeway tunnel in the US. That claim may be technically true, but the LED tunnel project under the Los Angeles International Airport (LAX) is certainly more complex and drivers certainly hit freeway speeds in that tunnel. We covered the LAX project in a feature on the Auroralia Awards.

Tunnel lighting will certainly be a growing area for LED lighting because of both the efficiency of LED lighting and the technology's affinity for controls. We covered the application space in a feature article earlier this year.