The new tunable-white Echelon lamps in Minnesota have no onboard sensors detecting rain or snow. Rather, they take their cue from IBM's Watson IoT group, drawing on IBM's The Weather Company. 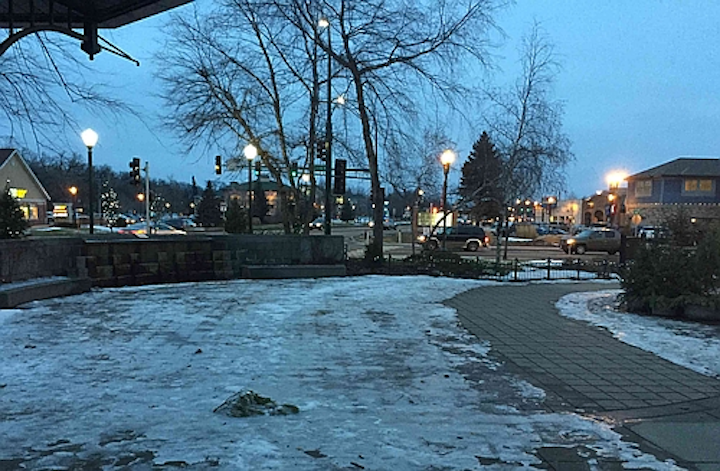 The new tunable-white Echelon lamps in Minnesota have no onboard sensors detecting rain or snow. Rather, they take their cue from IBM's Watson IoT group, drawing on IBM's The Weather Company.

A Minneapolis suburb that is trialing tunable-white LED street lights has now equipped them to automatically adjust brightness and color temperatures based on weather conditions. So that must mean the town added sensors that can help detect rain, fog, clouds, dust, and the like, right?

Wrong! While the lights at White Bear Lake contain other types of sensors such as photocells that note daylight and darkness, they do not house a single chip dedicated to weather detection or forecasting.

Rather, controls company Echelon Corp. feeds the lights with weather information provided by partner IBM, the computer giant that in 2015 acquired a large chunk of The Weather Company in an important buttressing of IBM's Watson Internet of Things (IoT) strategy.

The lights know that a blizzard is raging not because any onboard circuits have directly detected it, but because the IBM Watson system has informed them. Once notified, the Echelon Lumewave system takes appropriate action. According to Echelon, the town can pre-program the lights to, for instance, deliver brighter and warmer colors during a snowstorm in order to minimize glare. Or they can deliver bluer colors during a thunderstorm to enhance visibility and alertness. 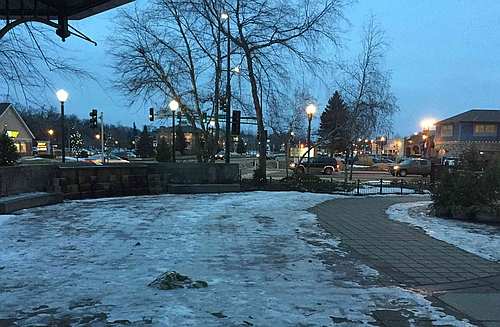 “IBM Watson analyzes local weather station data to accurately determine the weather condition,” Echelon head of product management Apurba Pradhan said in a conversation with LEDs Magazine. “The Lumewave by Echelon control system provides presets with not only brightness level but also color temperature settings of the light that overrides the programmed schedule to provide the best visibility in certain weather conditions. For example, a photocell cannot tell the difference between a foggy day compared to a rainy day, so it may set the light level to the same high brightness settings. However, brighter light may worsen visibility in the fog, similar to the effect of turning high-beam headlights on in the fog. A more optimal lighting scenario may be to turn the streetlight color to a warmer CCT and turn the light to a mid-level brightness for less glare and better visibility.”

White Bear Lake marks the first known example of how Echelon is working with IBM's Watson Internet of Things group.

As LEDs Magazine wrote in January, the two companies expect the partnership to help optimize street-light operations by sorting through reams of data collected both from the lighting infrastructure as well as from external sources. Watson analyzes big data to spot trends and predict things like the weather, drawing on computing power from big iron such as IBM's Watson supercomputer.

White Bear Lake is a small trial example of both the partnership and of Echelon's new tunable-white street lights, deployed at a town park. Echelon hopes to operate many more weather-related systems via Watson, which by virtue of IBM's Weather Channel acquisition is well stocked with big data weather information that it can disseminate to lighting systems.

Cities could use the Echelon-Watson combination not just to adjust lighting levels during weather events, but also to warn people that a storm is approaching, be it snow, dust, sand, or whatever.

“Watson uses its powerful artificial intelligence to provide predictive analytics,” Pradhan said. “Sensors in a luminaire do not provide that capability. With predictive analytics, street lighting could be used as a public notification system for weather events. For example, certain New England municipalities use a blue light system on snow removal routes to let drivers know not to park on those streets during snow storms.”

IBM's Weather Company describes itself as “one of the largest providers globally of atmospheric and weather data.” It claims to produce forecasts for 2.2 billion locations every 15 minutes, drawing on data collected through a vast global network of weather stations and sensors which note changes in air pressure and other indicators. Its information comes from conventional weather stations as well non-traditional sources. For example, it is believed to tap tens of millions of smartphones around the world whose owners have downloaded its apps such as the highly popular The Weather Channel, and Weather Underground. Phones gather air pressure information that helps Watson note and predict conditions. Likewise, The Weather Company uses sensors tacked onto commercial aircraft.

“It's a lot of data, and depending on what type of weather prediction we want to provide our customers — some people want fog, some people want snow, some people want dust storms — we can customize that and receive alerts from the IBM Watson engine,” said Pradhan. “And we have a little adapter that runs alongside the Watson engine that sends these commands into our cloud service or a locally installed service and we can do presets for different weather events.”

The information travels to an Echelon gateway via the Internet.

As Echelon ramps up its Watson-based services in other locations, it will use a combination of wired and wireless communication to send the information from the gateway to specific lights. In the US, about 80% of that communication will be wirelessly via the IEEE 802.15.4 protocol, which operates at around 900 MHz. The other 20% will travel via power-line data transmission, serving places like tunnels or decorative lamps where an antenna “would defy the purpose,” Pradhan noted.

He added that in Europe and Asia, where power-line data is cleaner and where wireless rules are less accommodating, the company will be more wired than wireless.

Echelon pays IBM for the Watson IoT service, and in turn structures deals with its lighting customers on a service basis.

As lighting companies move into smart lighting, some take ownership of the assets — and thus the profits — by building IT components into lighting hardware. The Echelon-IBM partnership illustrates that the IT wizardry doesn't have to physically reside in the lighting infrastructure, and that lighting companies could pragmatically settle for IT partnerships rather than ownership in many IoT situations.