Consolidating the Multi-Year Program Plan and SSL Manufacturing Roadmap published previously, the US Department of Energy has published the 2015 Solid-State Lighting R&D Plan. 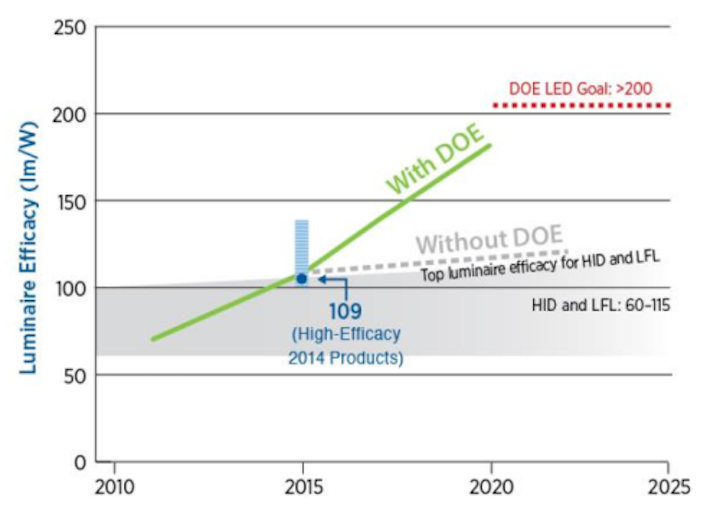 Consolidating the Multi-Year Program Plan and SSL Manufacturing Roadmap published previously, the US Department of Energy has published the 2015 Solid-State Lighting R&D Plan.

The US Department of Energy (DOE) has announced publication of the 2015 Solid-State Lighting (SSL) R&D Plan — a new document that consolidates elements of multiple documents from previous years. The new plan is largely based on roundtable meetings held going back to October at DOE SSL workshops, and is focused on research and development needs in both the LED and OLED technology areas. 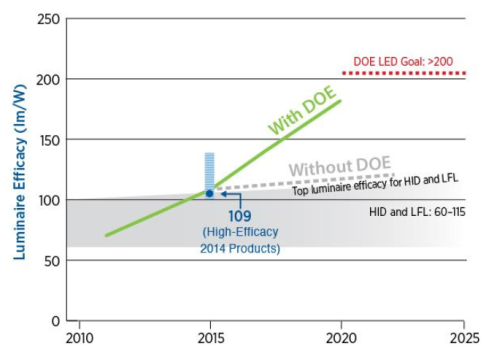 The new SSL research program document is intended to replace the separate Multi-Year Program Plan (MYPP) and SSL Manufacturing Roadmap documents that have been published annually in prior years. The MYPP was last updated in May 2014 when the DOE noted the need for new development in emitter materials, down-converters (such as phosphors), and light quality. The LED and OLED manufacturing roadmap was last updated in August 2014 with color uniformity issues, and manufacturing advancements to address those issues, as a key focus.

Such DOE reports are truly important on a global basis. The US SSL industry certainly refers to the published data, although companies and governments on a global basis also rely on the work. With the new SSL research program plan, the DOE hopes to influence the direction of R&D efforts over the course of the next three to five years.

The new report notes that despite success in SSL deployments less than 10% of existing lighting installations around the globe are based on SSL technology. The implication is that SSL technology will continue to make a huge impact in energy consumption for many years to come. The DOE projects that by 2030 LED technology can save 261 tWh of electricity annually, representing a 40% reduction relative to a scenario where SSL was not deployed. Aggressive R&D could ramp the savings to 60%, according to the new report.

The DOE seeks to achieve an efficacy goal of 200 lm/W at the luminaire or system level by 2020. The report states that higher efficacy in packaged LEDs is increasingly difficult to achieve but suggests that a focused effort on efficiency droop and narrow-linewidth down-converter materials can deliver additional gains.

The new report identifies SSL research priorities in both the LED and OLED sectors. In addition to droop and phosphors, the LED priorities include encapsulation materials, new emitter architectures, integration of emitters and system-level elements, and new approaches to luminaire design.

OLEDs, meanwhile, continue to lag LEDs significantly in efficacy and output, but the DOE continues to see potential in the technology and the need for the inherently-diffuse light sources. Indeed, the agency continues to invest R&D dollars in the technology. Newly published R&D priorities include materials research, light extraction, luminaire development, improved manufacturing, and manufacturing using flexible substrates.

In the new plan, the DOE also urges the industry for R&D work on other symbiotic technologies that are used in both LED- and OLED-based designs. The priorities begin with better drivers, but not surprisingly include a focus on smart controls and sensors. Moreover, the DOE is urging additional work on human-centric lighting and overall light quality.

Summarizing the top-levels SSL research goals briefly, the DOE is projecting that LEDs approach 250-lm/W efficacy levels for warm- and cool-white components by 2025. The report notes that new hybrid approaches may be required such as using a mix of monochromatic and phosphor-converted emitters. The agency projects OLED efficacy to hit 160 lm/W by 2020 and to ultimately reach 190 lm/W.