The Smart City Protocol whitepaper describes the basics of how municipalities can adopt a standardized abstraction layer above proprietary SSL-based network protocols enabling smart-city applications to operate across products and systems from multiple vendors. 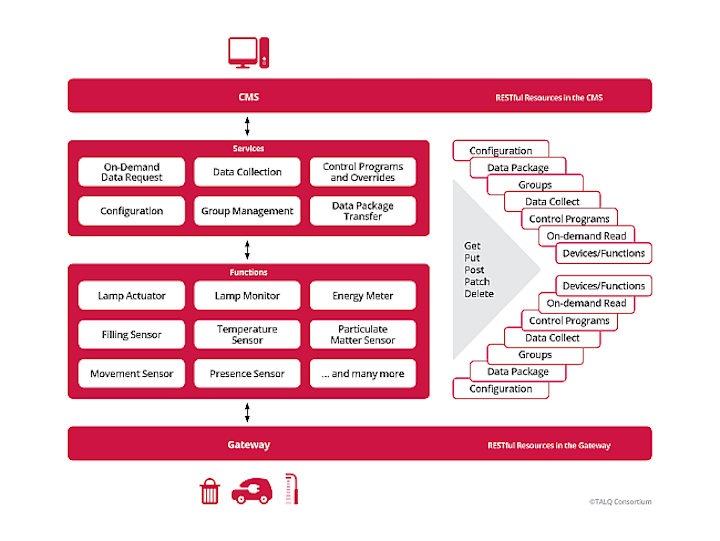 The Smart City Protocol whitepaper describes the basics of how municipalities can adopt a standardized abstraction layer above proprietary SSL-based network protocols enabling smart-city applications to operate across products and systems from multiple vendors.

Interoperability of disparate LED-lighting-based networks remains perhaps the biggest obstacle to the vision of a solid-state lighting (SSL) transition enabling an ideal backbone for smart city applications. The TALQ Consortium was founded to eliminate proprietary outdoor device networks (ODNs in TALQ parlance) as an obstacle via protocols that would allow a single CMS (central management software) platform to control and communicate with multiple ODNs from different vendors. The TALQ organization has delivered the TALQ Specification Version 2.0 to its members, and now has a whitepaper that explains the theory behind what it calls “The smart city protocol.”

Street lights have been considered the ideal infrastructure for installing city-wide networks because the lights are ubiquitous, power is readily available, and the transition to LED luminaires is leading to wide-scale retrofits. We have previously written that, in some cases, the cost of adding network connectivity and intelligence can be justified just via the simplification of the commissioning and preventive maintenance processes.

Thus far, however, there has been no consensus on a choice of networks to connect street lights. Some municipalities are using cellular networks, such as Los Angeles. A number of SSL companies offer ZigBee-based wireless-mesh connectivity and such systems have been installed around the globe. But quite often, companies add some proprietary features for security or other functionality. Other options include Bluetooth Mesh and powerline communications.

The fractured landscape led TALQ to work on an abstraction layer between the ODNs and the CMS. Basically, each company that offers an ODN can develop a gateway that is compatible with the TALQ Smart City Protocol in terms of message types, data format, parameters, and the behavior of the CMS layer and the gateway. 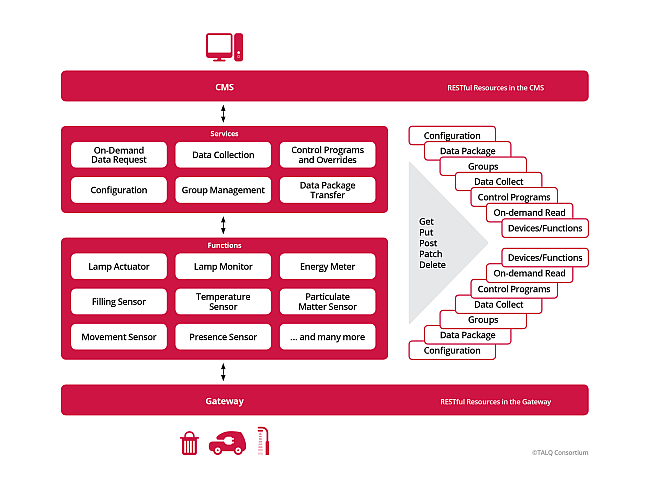 The latest educational whitepaper from the TALQ Consortium explains the theory behind the TALQ Specification Version 2.0, which delivers a smart-city protocol for street-light-based municipal networks.

The protocol is based on a so-called RESTful architecture where REST implies a Representational State Transfer — an architecture developed for web services that run on top of HTTP. And the protocol relies on the widely-used JSON (JavaScript Object Notation) data-interchange format.

The nearby diagram summarizes the data model used by TALQ devices. The model is based on the limited set of requests defined in the RESTful architecture including GET, PUT, POST, PATCH, and DELETE. A gateway must respond to each of the defined requests using JSON data payloads. The standard defines services that should be implemented in the gateway along with typical functions that would be expected in a luminaire such as a motion sensor or an energy-use meter.

The TALQ Consortium believes the protocol can enable a broad variety of smart-city applications. The list starts with lighting-centric applications including control of light levels and accurately measuring energy usage. But the scope extends to applications such as parking space monitoring and environmental sensing.