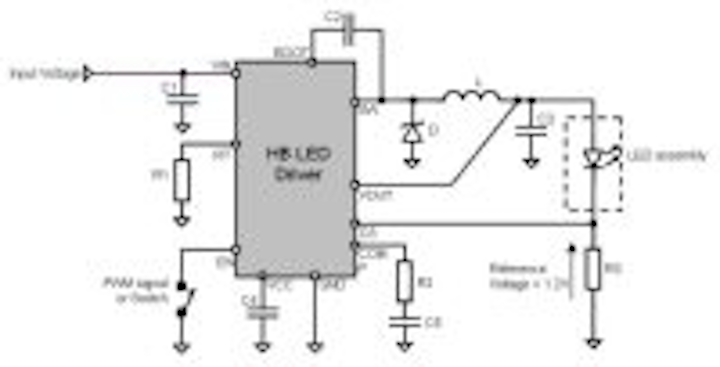 High-brightness LEDs are being widely adopted into luminaires for the general lighting market, with a myriad of possible applications; commercial/retail downlighting, industrial, architectural, external and emergency back-up lighting to name a few. In the effort to produce more lumens in these applications, the LED driver requirements are becoming more onerous as LED currents increase. In many applications, the typical LED currents range from 350mA up to 1A, however, some of the latest LEDs require anything up to 3A.

In addition to the higher current requirements, efficiency improvements are becoming mandatory, for example through Energy Star standards. Size is often important and of course cost is always critical. To address all these requirements requires driver solutions that utilize innovative switching architectures.

The majority of LED driver solutions available on the market today are based on standard voltage-regulator architectures. Typical solutions, for example using a fixed-frequency, current-mode-control buck converter (see Figure 1, are far from optimum.

The control schemes tend to be overly complex, often having two loops: an outer-loop to regulate the current control (set by R3 in Figure 1) and an inner-loop to provide the peak current control. This control technique typically requires external compensation components (R2 & C5) as well as having the additional overhead in the silicon, which impacts cost.

Another problem is that brightness control is difficult to achieve. Most solutions rely on pulse width modulation (PWM) frequencies in excess of 200Hz to avoid flicker. A good dynamic range for brightness control requires the ability to modulate to duty cycles as low as 10%. With a 200Hz signal, this means the driver has to support the ability to turn on and off in a period of 10% x 1/200 seconds, or 0.5 ms. Most solutions have an inherent soft-start feature that is in the region of several ms, severely restricting the dynamic control range.

The voltage in the current-control loop can be as high as 1.2V, which has a large impact on the power dissipation. For example, when driving a single LED with a forward voltage (Vf) of 3.5V, the efficiency drops by 34%, even before other losses are considered. Note also that this loss occurs across the full switching period.

Figure 2 shows a circuit built around the Allegro A6210, which has been specifically designed and optimized for driving high-current LEDs. With a simplified control scheme, the component count amounts to only two resistors, two capacitors, one Schottky diode (D) and the power inductor (L).

An output capacitor is not required, firstly because the peak-to-peak current ripple can be as low as 10% of the maximum LED current through careful selection of the inductor value and switching frequency. This more than meets the majority of HB-LED lighting applications. Secondly, there is no outer-loop requiring stabilization.

The control architecture deploys a simple inner-loop that controls the current by sensing the voltage developed across the sense resistor (R2) during the recirculation diode (D) conduction phase. No outer-loop is required, simplifying the design and removing the need for external compensation components.

A further advantage of this scheme is that the start-up restrictions of the more traditional control schemes are largely removed as the requirement for soft-start disappears.

Figure 3 illustrates the rapid start-up performance using the circuit configuration of Figure 2. In this particular application, the input voltage is 42V, the LED assembly has seven 1.4A HB LEDs connected in series producing 24V and the switching frequency is 1MHz.

The A6210 is designed to operate at switching frequencies of up to 2MHz allowing the use of low value inductors with physically small footprints. Figure 4 illustrates the main switching voltage waveform on the LX pin as well as the current through the LED assembly.

The A6210 is designed for very high efficiencies. A reference voltage of only 183mV is used, making it amongst the lowest in the market. Furthermore, the loss contribution from the reference only occurs during the recirculation diode conduction phase and not across the full switching period.

The series switching MOSFET has been specifically optimized to minimize the power loss contributions from both the static and switching losses. Many vendors claim their integrated MOSFETs are low impedance, but neglect the effects of switching losses which can be considerable, especially at high switching frequencies and/or high input voltages.

In the above example, an efficiency of 90.5% was achieved.

The Allegro A6210 addresses the requirements for current and future HB LED based luminaires. To aid the design-in phase of the A6210, a simple spreadsheet is available for download from the Allegro website. From a simple "black box" specification, the component selection is made along with an efficiency estimator.