The primary lighting in new London-area Crossrail stations will rely on custom, high-output, uplight SSL fixtures that indirectly illuminate the space via reflective surfaces on walls and ceilings, creating a sense of spaciousness. 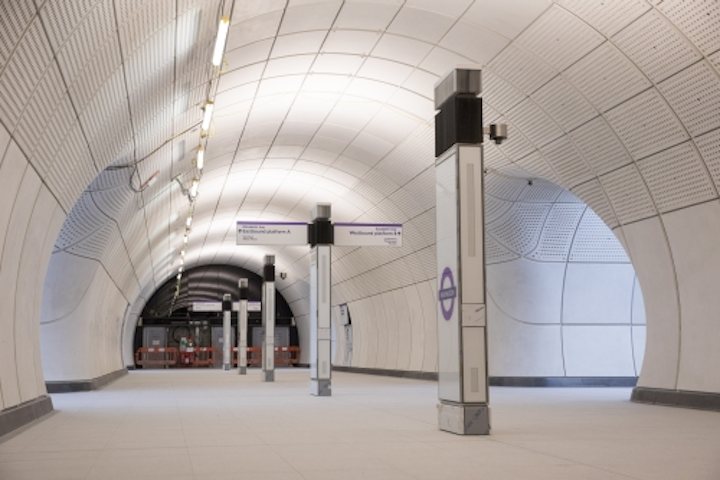 The primary lighting in new London-area Crossrail stations will rely on custom, high-output, uplight SSL fixtures that indirectly illuminate the space via reflective surfaces on walls and ceilings, creating a sense of spaciousness.

Future Designs has announced the development of custom LED luminaires that will be used in many of the stations for the new Crossrail transportation system in London, UK and has also detailed some of the lighting-design elements of the solid-state lighting (SSL) project. Future created three custom or bespoke SSL fixture designs for the project that will be used for station concourse lighting, lighting escalator corridors, and emergency lighting. The lighting design will rely primarily on indirect lighting techniques that will deliver a sense of spaciousness.

The indirect lighting concept created unique challenges for the project team while promising to result in a pleasing space for the millions that will utilize the Crossrail system. Crossrail is a 42-km underground rail-transportation system that will connect the east and west sides of the expansive city. The project is said to be the most significant infrastructure project in the UK in more than 100 years and is the biggest ongoing construction project in all of Europe. The ₤14.8 billion ($19 billion) transportation project will enable 1.5 million more residents to reach central London within 45 minutes and greatly speed and simplify the journey between London Heathrow airport and the booming east side of the city.

The Crossrail developers had decided early on to utilize all LED lighting. Indeed, we published an interview back in 2013 in which a consultant on the project revealed that the added cost of LED lighting would be more than equalized by less copper wire being used due to the lower power requirements of LED sources. Of course, maintenance costs would also have driven the SSL decision and the cost of LED lighting has dropped considerably over the past five years. 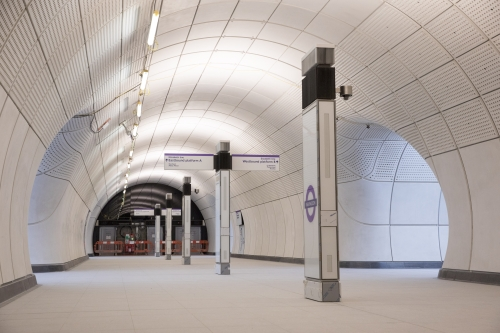 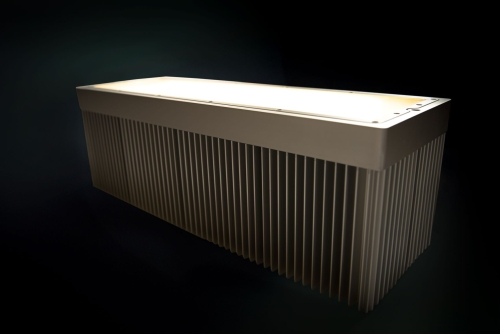 The combination of custom-designed indirect lighting and a hybrid concrete material on the walls (top) allows the new SSL fixtures by Future Designs (bottom) to deliver a pleasing aesthetic and better visibility for commuters at London Crossrail stations. (Photo credit: Crossrail Project.)

Back to the lighting design, the developers have installed a light-gray lining on all surfaces including curved walls and ceilings in the subterranean environment. The surface lining is a matte-texture, glass-reinforced concrete. Moreover, that lining is ideal for reflecting indirect light, both providing a pleasing ambience and delivering plenty of visibility for commuters transiting the stations.

But the lighting design team needed a fixture to generate a tremendous amount of light in the concourse space. Future developed the Ikon luminaire for the project that is mounted on top of totems that you can see in a nearby photo. Those totems are spaced at distances ranging from 7–11m. Calculations revealed the need for a luminaire that could deliver 58,000 lm, which was ultimately realized with an 850W design.

Of course, cooling an 850W luminaire required a large custom heatsink. That heatsink essentially became an integral part of the fixture aesthetics. In the aforementioned concourse photo, you can see the heatsink area between the top of the totem and the uplight surface. Furthermore, the nearby closeup photo of the fixture shows the mechanical design in more detail. The Ikon fixtures are being installed in Crossrail stations at Tottenham Court Road, Farringdon, Liverpool Street, Bond Street, and Whitechapel.

Future further designed the Ikon Emergency fixture and those luminaires are mounted on the side of the totems. The fixtures are capable of throwing light long distances along the station floor. The 35,000-lm fixtures would be powered if power is lost by an emergency generator.

Finally, Future Designs created another luminaire called Plinth to deliver uplight in the deck area between escalators. That design had to integrate a glass panel for safety due to proximity to passengers. And the design team used a black louvre to ensure that passengers see no direct light.

We’ve covered the use of LED lighting in subway or rail settings a number of times over the past few years. For example, Philips Lighting (now Signify) installed SSL in the Washington, DC Metro system in the US. And Moscow has deployed LED lighting in a subway application with the sources hidden in traditional Russian ornaments. Indeed, flexibility in fixture design is a primary factor in the transition to LEDs for transportation lighting.