Lumileds K2 with TFFC technology operates at 1 A

A new chip technology and improvements to the K2 package have enabled Lumileds to introduce a power LED that is binned and tested for standard operation at 1000 mA. 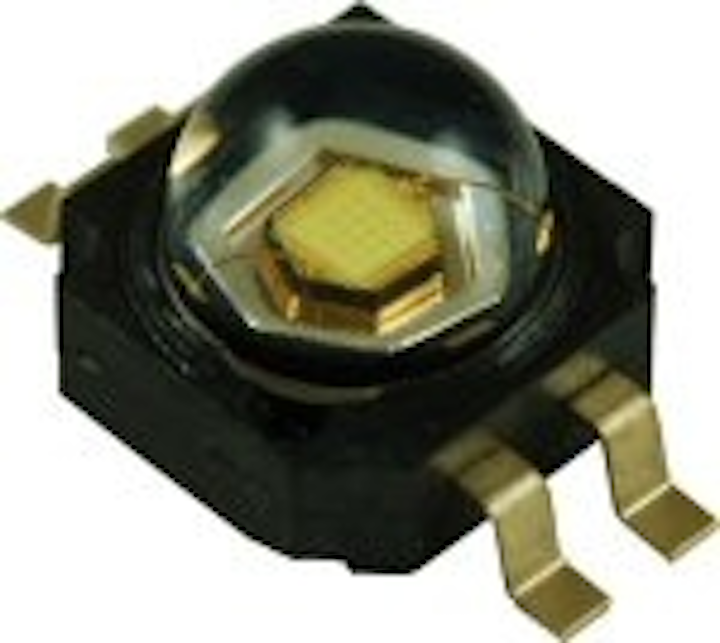 Philips Lumileds has announced its new cool-white Luxeon K2 with TFFC LED chip technology, which it describes as "the industry’s first 1A LED".

The company says that the new cool-white device is available from Future Lighting Solutions, and that it is preparing for volume production of neutral-white and warm-white to be followed by royal blue, blue, cyan and green.

Explaining the tag of "industry's first 1 A LED", Lumileds says that the Luxeon K2 with TFFC is the only LED designed, binned and tested for standard operation at 1000 mA, and capable of being driven at 1500 mA.

Light output performance from a Luxeon K2 with TFFC part binned and tested for 160 lumens minimum and 1A drive current can easily exceed 220 lumens at higher drive currents. Lumileds says that Luxeon K2 with TFFC "leads all LEDs in real-world applications" and is designed and manufactured to operate reliably and effectively in the harshest environments.

Packaging advancements have improved the thermal resistance to 5.5 °C/W, allowing the LED to be driven at higher currents and lowering thermal management engineering efforts and costs.

In its press release, Lumileds claims that products from other LED makers that are designed to operate at 350 mA cannot be driven reliably at higher currents without sacrificing lumen maintenance or causing junction temperature to exceed published maximums. "None of the other LEDs can be operated at 1A for extended periods of time," says the Lumileds press release. "In fact, even when datasheets indicate typical values at higher drive currents, they are not achievable in actual applications."

“Customers are already making the move to 1000 mA drive currents and higher to take advantage of higher light output and improved efficacies,” said Erik Milz, Product Manager at Philips Lumileds. “Incorporating TFFC technology and package improvements gives us the best LED for the most demanding applications and environments such as automotive, signaling, general lighting and architectural applications. Using a single chip allows for the smallest optical source size making it easier to design optics such as reflectors, diffusers and lenses that are essential for most applications."

The advantages of a high drive-current rating allows designers to increase current without increasing thermal management size or cost to the same degree. For applications where maximum light and robustness are required while still delivering improved efficiency, Lumileds says that Luxeon K2 with TFFC can be implemented to engineer the most cost-effective solutions that consider all costs including the thermal management system, drive electronics, optics and LED count.