Running LEDs from an AC supply

In most applications, LEDs are driven by a DC power supply, but AC offers several significant advantages. Lynk Labs has developed technology that allows LEDs to be driven directly from an AC supply. 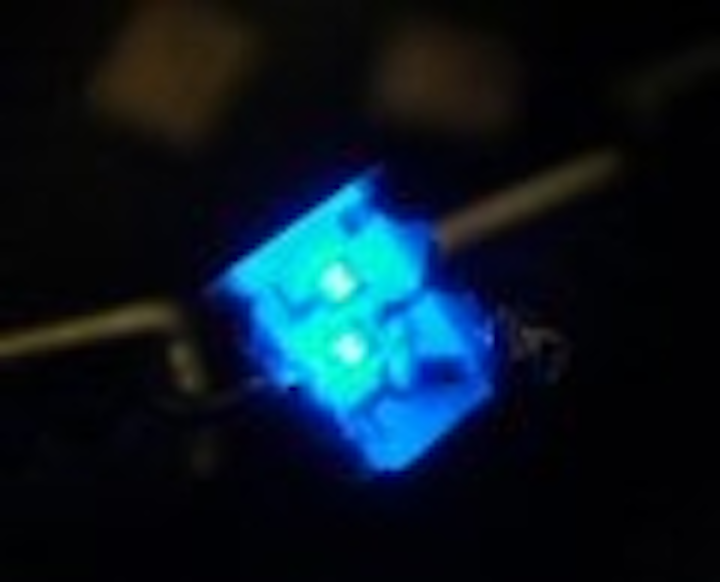 LEDs are usually considered to be DC devices, operating from a few volts of direct current. In low-power applications with a small number of LEDs, this is a perfectly acceptable approach, for example in mobile phone handsets, where power is supplied by a DC battery. But other applications, for example a linear strip-lighting system stretching for 100 m around the outside of a building, bring different considerations. DC drive suffers from losses over distance, requiring the use of higher drive voltages at the start as well as additional regulators that waste power.

In contrast, AC will perform better over distance which is why it is the method used for delivering power to homes and businesses throughout the world. AC makes it very simple to use transformers to step down the voltage to 240 V or 120 V AC from the kilovolts used in power lines, but this is much more problematic with DC.

To run an LED-based fixture from a mains supply (e.g. 120 V AC) requires electronics between the supply and the devices themselves to provide a DC voltage (e.g. 12 V DC) capable of driving several LEDs.

A new approach is to develop AC-LEDs, which can operate directly from an AC power supply. This provides several advantages, as Bob Kottrisch of Lynk Labs, one of the companies at the forefront of this approach, explains: "With AC, power is transmitted and used much more efficiently," he says. "If you can put your LEDs directly on the end without having to include complex electronics to convert AC back into DC, then you've gained a double advantage; you've handled the power efficiently in the distribution environment, and you've delivered it more effectively without intervening electronics."

Of course, if you can also get more light out for less power, as Lynk Labs claims with its AC-LED approach, then you have still more of a positive position.

Running LEDs from an AC supply

There are several options for operating LEDs from an AC power supply. Many stand-alone LED fixtures simply have a transformer between the wall socket and the fixture to provide the required DC voltage. A number of companies have developed LED light bulbs that screw directly into standard sockets, but these invariably also contain miniaturized circuitry that converts AC to DC before delivering it to the LEDs.

Another approach is to configure the LEDs or die themselves into a DC bridge circuit . Although AC is input to this LED bridge circuit configuration, the LEDs are still driven with DC and this approach requires more drive power than a "true" AC-LED design.

One early form of a "true" AC-LED system, in which the devices operate when connected directly to an AC supply, is the "Christmas tree light" approach. Here, multiple LEDs are connected in series so that the voltage drop across the whole string equals the supply voltage.

However, attempts have been made to develop "true" AC-LEDs at the assembly or packaged device level.. At the forefront of these developments are Lynk Labs, Seoul Semiconductor and III-N Technology.

The technology developed by Seoul Semiconductor and separately by III-N Technology uses the Christmas tree approach at the die level. The AC LED device is actually made up of two strings of series-connected die, connected in different directions; one string is illuminated during the positive half of the AC cycle, the other during the negative half. The strings are alternately energized and de-energized at the 50/60Hz frequency of the AC mains power source, and thus the LED always appears to be energized. The technology developed by Seoul and III-N specifically relates to LED devices designed for high-voltage 50/60 Hz mains AC power.

Unlike Seoul or III-N, Lynk Labs approach has been to develop AC-LED technology that combines as few as 2 die or LEDs in a single assembly or package along with matching driver technology for the specific AC-LED.

"Lighting manufactures are interested in offering LED lighting products, not in becoming experts in electronics or semiconductors," says Mike Miskin, Lynk Labs' CEO. "The approach Lynk has taken is to provide plug-and-play total solutions for our customers."

Lynk Labs' AC-LED technology sits on both ends of the system. The company's drivers are designed to provide to the AC-LEDs either (a) a constant voltage or (b) both a constant voltage and constant frequency. The AC-LED device or assembly is designed to connect to the driver without the need for any additional engineering, except for a fixture provided by the luminaire manufacturer or end user.

Various designs are available for the AC-LED device or assembly, however they all derive from the use of AC-LED drivers providing either constant voltage or both a constant voltage and constant frequency.

With Lynk Labs' constant-voltage AC drivers, LEDs are driven in opposing-parallel circuit configuration at various frequencies based on the application. Here, the high-frequency/low-voltage driver is used to drive an AC-LED device or assembly that matches the constant-voltage driver. Alternatively, other devices and assemblies are designed to connect directly to mains power or low-voltage transformers such as those used in landscape lighting.

With constant-voltage/constant-frequency drivers, a C3LED (capacitive current control LED) is capacitively coupled to and driven by the driver. The capacitor replaces any need for resistive components in the system, thereby reducing heat and improving efficiency.

The C3LED device or assembly includes reversed opposing die or LEDs with an integrated or on board matching capacitor.

Compared with using the same die in a DC-driven resistor-based circuit, the C3LED approach can provide higher brightness at the same power (or alternatively uses lower power at the same brightness), depending on the device or system design.

A standard LED device is typically powered by a DC supply, and in its simplest form the driver circuit includes a resistor to ensure the correct voltage drop across the emitter (Figure 1a). In contrast, Lynk Lab's C3LED approach employs an even number of LEDs or die in a circuit that also contains a capacitor and is connected to an AC supply (Figure 1b). The system is designed so that both half cycles of the AC wave are used efficiently.

A typical C3LED device combines 2 or more LEDs/die (in multiples of 2 or more, to use both halves of the AC cycle efficiently) with a capacitor.

Although both devices above require different voltages and currents, they can both be coupled to the same AC-LED driver or power source without the need for additional electronics or components.

This C3LED approach also improves thermal management, efficiency by eliminating the resistive component which is necessary in the DC circuit.

There is also the issue of added reliability.

In a DC-driven circuit shown in Figure 2a, the 24V DC constant current driver sends 1.4 A across 4 parallel strings of LEDs, at 350 mA per string. If one string fails (Figure 2b), the driver still produces 1.4 A, which now means 467 mA on each of the remaining 3 strings. This over-current situation, which is clearly not desirable, can be avoided using Lynk Labs AC-LED technology. In Figure 3a, a 12 V AC supply provides 350 mA to each of four C3LED strings, which in turn each contain 6 emitters. If one string fails (Figure 3b), the same current of 350 mA continues to be supplied to each C3LED string, because the driver provides a constant voltage and frequency and the current is controlled by the capacitor in each string.

Preliminary results indicate that the C3LED approach can provide higher brightness at the same power, or can alternatively consume less power to achieve the same level of brightness. The origin of these results is not entirely clear, but is linked in part to the fact that the LEDs have a lower junction temperature because they are only on during one half of the AC cycle.