With speakers representing a wide range of technology sectors and end-user markets, the recent LEDs conference in the UK provided an opportunity to discuss ongoing trends in the industry. 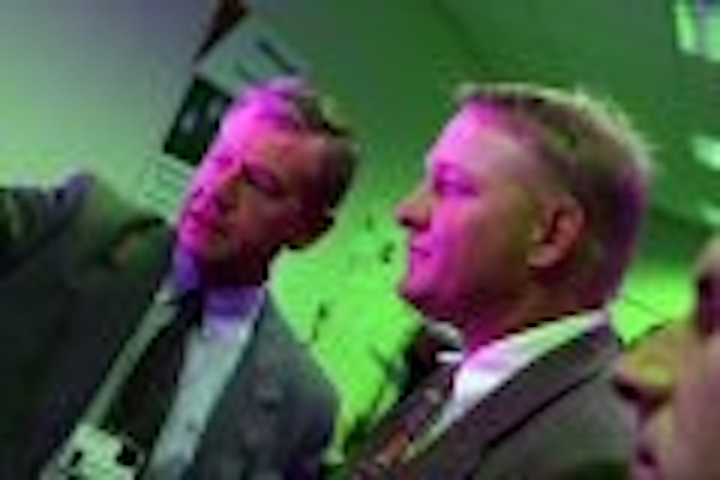 “LEDs – Lighting the Way Forward” was a two-day event held in Birmingham, UK and organized by the Photonics Cluster (UK), an optoelectronics networking group, in association with LEDs Magazine. Day 1 focused on some of the technical issues surrounding LEDs – optics, test & measurement, drivers – as well as market trends, while day 2 took a closer look at some of the diverse applications for these devices. For example, Chris Pekar of TIR Systems described the promise and challenges of using LEDs for architectural lighting applications, while John Ekis of Lamina Ceramics presented a case study of designing an LED task light (see news item).

Technology developments
Gareth Jones of Enfis described the emergence of a “multi-watt” class of LED systems, which are finding use in medical light-based applications such as photo-dynamic therapy or skin treatments, as well as industrial applications (task lighting, UV curing) and in automotive sector. There are a wide range of design challenges and trade-offs in building such systems; for example, novel optical approaches are necessary to keep efficiency high while retaining compact size. Also, thermal management, involving conduction of heat away from the LED array coupled with convection (e.g. forced air cooling), involves consideration of cost, footprint and manufacturing complexity, as well as performance.

Christoph Cox of Vossloh-Schwabe Optoelectronic described the technical issues involved in chip-on-board (COB) production, in which LED chips are placed directly onto a printed circuit board. COB offers advantages over conventional LED technology including a lower process effort, a high chip density, better thermal management, and flexibility in both miniaturisation and product design. Along with higher chip densities, and improved production technologies such as flip-chip, Cox also highlighted the importance of a good relationship between chip suppliers and the COB manufacturer.

Andrew Dennington of Carclo Technical Plastics presented a series of optical design tips for luminaire designers. “Before you start,” he said, “consider where the luminaire will be used, find out if any regulations cover the product, and be realistic about the lumen output from your LEDs.” Because LED boards can get very hot, it’s important to select the right plastic material for the optics. Also, when defining the illumination requirements, it’s equally important to specify where you don’t want the light to go. Dennington also included a word of caution; “The latest generation of LEDs is not safe, and someone will have their eyes damaged by a high-power LED product,” he warned. “Check your products to the relevant standards.”

Vehicles and transport signalling
LEDs are widely used in road traffic signals, and have also been applied on rail networks. David Rudge of Westinghouse Rail Systems described how LEDs are now allowed as light sources in the specifications governing UK rail systems, which call for compliance between -20 and +40°C. “The colour variation with temperature of red and green LEDs can be accommodated within the spec,” said Rudge, “but the colour variation of yellow LEDs is a problem with existing technology.” Yellow LEDs drift by about 1 nm per 10C, or about 6 nm from -20 and +40°C, which is sufficient to move them outside the very narrow colour specification for yellow. An additional problem is the wide tolerance in LED bins of typically 4 nm, so that Westinghouse uses a secondary selection scheme, with another company making use of the unwanted LEDs.

Representing the automotive lighting industry was Jan Popelek from the Autopal Lighting Technical Centre in Nový Jičín, Czech Republic, which is the Visteon centre of excellence for lighting systems. Popelek described a hybrid headlamp with an HID lamp for high- and low-beam functions, combined with an LED daytime running lighting (DRL), an amber LED turn indicator, and a “static cornering” light (which illuminates around corners during turning). At present, ECE regulations (European rules relating to vehicles) allow the use of LED sources for signaling lights (stop, position, turn indicator, reverse, rear fog, side marker) as well as for DRLs and cornering lamps. However, at present LEDs are not approved for use as light sources in high- and low-beam functions and front fog lamps. Popelek’s colleague Martin Kocián told LEDs Magazine that there is pressure from industry to allow LEDs to be used in headlamps, and various proposals have been put before the appropriate working groups, but it will take at least 18 months to gain regulatory approval. There is no such restriction in the US.

Lighting applications
Luc van der Poel of Philips Lighting described emerging applications for LEDs, explaining that new products are influenced by both technology and social and cultural trends. Solid-state lighting can readily be used to provide ambience, for example in a bathroom where the lighting required during the morning rush to get ready for work would be much different from that required for a warm relaxing atmosphere in the evening. The technology also provides design freedom, flexibility and impressive light effects, while being environmentally friendly due to the lack of mercury.

Stewart Langdown of TridonicAtco described LEDs as “just another light source” which will become more widely used but is still restricted by cost. “There is a long way to go before the lighting industry switches over to LEDs, and we are likely to have fluorescent lights for a long time to come,” he said. Langdown also discussed the problems for LEDs in general illumination, andsuggested there could be a trend towards hybrid lights in which LEDs are used as highlights or edge lights. On the positive side, green issues such as lower energy consumption are a strong driver for adopting LEDs, but progress is required in many areas. “Specification is a key issue – there is so much variation, coupled with a lack of industry benchmarks,” said Langdown. Julian Ding, technical director of PLM Illumination, was equally forthright: “Customers don’t know anything about LEDs and they’re not interested in the technology,” he said, adding that LEDs are expensive, there are issues with heat dissipation, they require dedicated power supplies, and they are widely misunderstood. Even so, LEDs also have positive attributes; they are versatile, compact, have low energy consumption, are getting brighter all the time and have long lifetimes. Major markets for PLM include deck and paving lights, where zero maintenance provides a huge advantage, and cinema lighting.


Next year’s event
The 3rd international LED conference organized by Photonics Cluster (UK) will be held in the UK on May 16-17, 2006.