Focus on Thermal at SIL (MAGAZINE)

Heat remains the enemy of reliable solid-state lighting (SSL) products. Cooling LEDs ensures that SSL lamps and luminaires provide stable lumen output and color over product lifetime. To get a broad view of thermal design, we surveyed the thermal-related products at the recent Strategies in Light exhibits. 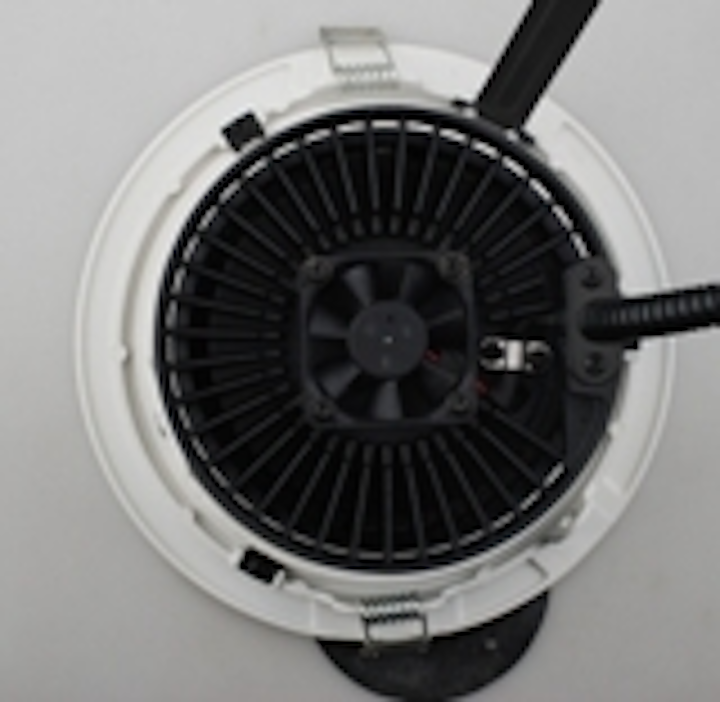 This article was published in the March 2013 issue of LEDs Magazine.

View the Table of Contents and download the PDF file of the complete March 2013 issue, or view the E-zine version in your browser.

Heat remains the enemy of reliable solid-state lighting (SSL) products. Cooling LEDs is necessary to not just enable long life, but to also ensure that SSL lamps and luminaires provide stable lumen output and color over the life of the product. Thermal management in an SSL product can encompass many elements starting with basic heat sinks but also including thermal materials, thermally-efficient circuit boards, active coolers, and other technologies, materials, and products. To get a broad view of the many approaches to thermal design, we surveyed the thermal-related products showcased in the recent Strategies in Light (SIL) conference exhibits.

Protechnic fan and heat sink
Heat sinks are among the most basic elements used to draw heat away from the LED junction where heat is generated. Typical heat sinks include fins or fingers so that airflow can help dissipate the heat. Protechnic manufactures custom-sized fans for SSL products that can be used along with heat sinks to increase airflow and therefore the amount of heat conducted away from the LED. The result can be the ability to operate LEDs at higher current producing more light output, or perhaps the ability to use a relatively smaller heat sink than would be required in a purely passive design. The photo shows a Protechnic fan mounted behind a heat sink on the back of an LED light engine. RTP thermally-conductive compounds
There are continuing advancements in material science that are proving to be key enablers of the LED-lighting space. For example RTP Company makes thermally-conductive plastic compounds, or thermoplastics, that can be molded into shapes that are specifically optimized for SSL products such as retrofit lamps. Indeed, thermal elements can both be integrated internally to an SSL product or serve as part of the product form or enclosure, providing the advantage of air exposure and superior heat dissipation. In the nearby photo, RTP thermoplastics were molded to form the outer structure of the lamp (the black material) that is also an integral part of the thermal-management system. Thermo Cool heat pipe
There are many ways to increase the effectiveness of heat sinks, and one emerging method is the use of heat pipes. Heat pipes use the principle of thermal conductivity combined with evaporation. Liquid inside the pipe conducts heat away from the LED by absorbing energy through evaporation. As the gas cools it condenses back into a liquid and returns to the source of the heat for another cycle. Thermo Cool Corp. designed the heat sink and pipe pictured to cool a 200W LED light engine. The company offers a variety of services including thermal analysis of SSL product concepts and custom design and manufacturing of thermal systems for such products. Cool Polymers thermally-conductive polymers
Cool Polymers is another materials company that offers polymers in pellet form that conduct heat well and that are available in an E-Series that also conducts electricity or in a D-Series that are electrical isolators. SSL manufacturers can mold the polymers into shapes that are useable both in retrofit lamps and luminaires. The E-Series material provides thermal conductivity ranging from 14-20 W/mK (watts per meter kelvin). The D-Series material provides thermal conductivity ranging from 2-6 W/mK. Cool Polymers says that the material offers a 50% reduction in weight relative to the use of aluminum alloys in similar roles. Sinkpad printed-circuit board technology
LEDs are regularly mounted on metal-core printed-circuit boards (PCBs) in which a metal layer helps conduct heat away from the LED. Of course the LED contacts must be isolated from the metal core by a dielectric layer because the copper or aluminum typically used as a core would electrically short out the LED. That dielectric limits the thermal conductivity of the PCB. Sinkpad addresses that limitation by forming a thermal pad under a portion of each LED that connects through the dielectric directly to the metal core. The company has documented LEDs operating as much as 20°C cooler on Sinkpad PCBs compared to other metal-core PCBs. The photo shows Sinkpad star-shaped PCBs for popular LEDs from multiple vendors. Lord thermally-conductive
silicone encapsulants
The materials story continues into formulations designed to encapsulate components in an SSL product design. Encapsulation can result in more reliable products, especially in areas such as the LED driver electronics. But those electronics also generate heat that must be dissipated along with the heat from the nearby LEDs.
Lord manufactures a number of thermal gels, adhesives, and encapsulants than can be used in SSL product design. The nearby illustration shows the driver electronics encapsulated in Thermoset thermally conductive silicone encapsulant. Graftech International flexible graphite heat spreader
Graftech turned to graphite material to develop its flexible eGraf Spreadershield that can evenly distribute heat in two dimensions, both in plane and through the material. The company says that the material features in-plane conductivity of 1500 W/mK – better than aluminum or copper at 30% to 80% less weight. Spreading the heat in the plane allows a heat sink behind the material to be more effective. Moreover the material can be flexibly formed for use in luminaire designs. The nearby photo depicts Spreadeshield used underneath an LED light engine in an EyeLED downlight manufactured by Phoster Industries.

Nuventix active air-jet LED cooler
Fans aren’t the only approach to moving air to increase the effectiveness of a heat single or enable the use of a smaller heat sink. Nuventix's Synjet technology relies on an oscillating diaphragm to create jets of air. The company says the technology is more reliable and quieter than traditional fans, and that it is more effective at removing heat due to the velocity vectors of the jet flow. At SIL, Nuventix announced the R150-170 series of products (pictured) that are specifically designed for high-bay lighting applications with the ability to cool light engines producing 20,000 lm.

Cooliance forged heat sinks and active coolers
Cooliance believes that LED applications can best be served by round and other non-linear shapes in terms of heat-sink design. The company has developed a forging method to make such structures and offers custom sizes ranging from 5-100 mm. The company combines those heat sinks in a product family it calls Coolstrate with an active cooler. Cooliance says that the fan can run from the LED driver and produce no audible noise while lasting for 50,000 hours of operation. EBM-Papst active LED coolers
EBM-Papst is a fan and blower specialist that has now developed products specifically for the LED lighting space. The company has also begun to offer modules that combine a fan and heat sink. Technically, the company is focused on maximizing fan efficiency through aerodynamics and recently introduced a technology called AxiTop that uses a diffuser to recover energy that's often lost at the exhaust of a fan. Heraeus thick-film thermal material
Rather than using a metal-core PCB, Heraeus enables the placement of LEDs directly on aluminum substrates with the electrical contacts isolated by the Celcion thick-film material. The company says that LEDs run 10°C cooler when installed on Celcion compared with metal-core PCBs because the thermal-interface material is eliminated. The Celcion material is only selectively applied to the aluminum substrate where needed for electrical isolation. The result, according to the company is lower SSL product cost because you can drive LEDs harder for more light output and use smaller heat sinks.

There were also a few other thermal-related exhibits at SIL that should be mentioned. The Bergquist Company exhibited thermal materials, thermal PCB substrates, and fans and blowers. One of the company's key technologies is called T-Clad designed specifically for surface-mount devices such as LEDs mounted on PCBs. Cofan USA demonstrated heat sinks for specific types of retrofit lamps. Dupont Electronics offers CooLam PCB technology for popular LEDs. Laird also exhibited thermal PCB substrates.

The message for SSL product designers is look at every aspect of a new design as an opportunity to enhance the thermal performance of the design and therefore the reliability of the new product. Moreover, the designers must expand the scope of technologies considered for use in a project with new materials and approaches coming to market constantly. Indeed the best products will result from the melding of thermal, mechanical, and optical design disciplines and the selection of products and technologies that serve the specific requirements of the application at hand.