Chip-scale packaging can potentially reduce the manufacturing cost and improve the performance of ultraviolet LEDs, and Seoul Viosys says it has tested the technology in purification and sterilization applications. 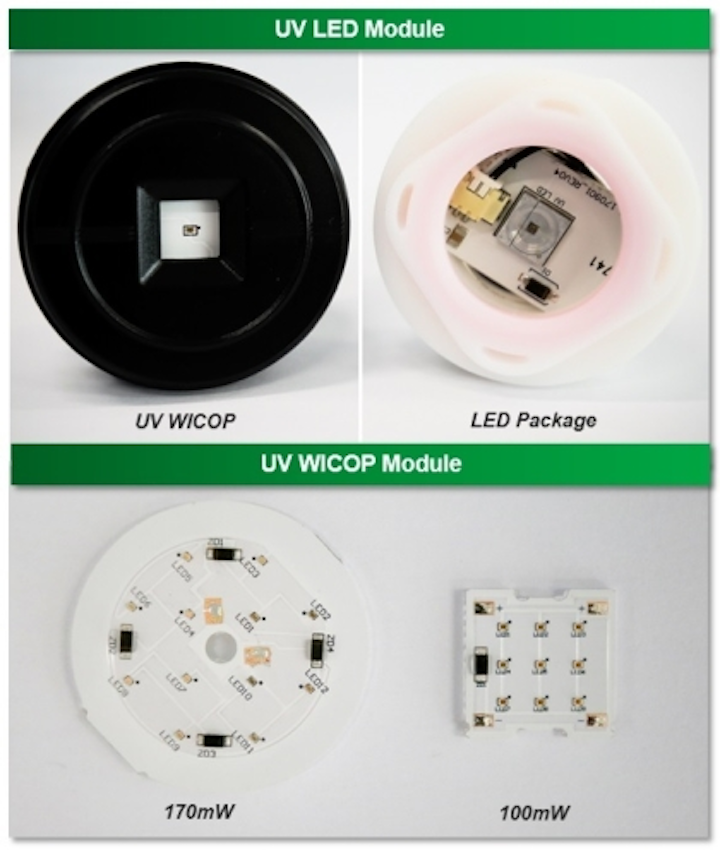 Chip-scale packaging can potentially reduce the manufacturing cost and improve the performance of ultraviolet LEDs, and Seoul Viosys says it has tested the technology in purification and sterilization applications.

Seoul Viosys, the ultraviolet (UV)-focused business division of Seoul Semiconductor, has announced that it will soon commercialize UV LEDs based on chip-scale packaging (CSP) technology, and that it had been awarded a patent for the technology development behind the UV WICOP LED design. Presumably, the CSP implementation will lower the manufacturing cost for UV LEDs while also providing a path to improved performance and lifetime.

Interested in articles & announcements on packaged LEDs and other form factors?

Seoul Semiconductor has been among the industry leaders in developing and selling CSP LED technology in visible-white-light components. The company refers to the portfolio as WICOP (wafer-level integrated chip on PCB) and Seoul began volume production for the general illumination market in 2016. The company had previously supplied CSP LEDs into display backlight and automotive applications.

As we chronicled back in 2015, CSP technology has been poised to impact the packaged LED sector, but the general lighting industry was slow to adapt the component that consists of little more than the LED chip. Still, the elimination of materials and manufacturing steps inherently equates to lower component cost in volume production. Moreover, the CSP technology is scalable in terms of performance.

Meanwhile, Seoul Viosys is among the industry leaders in UV-LED technology. The company first partnered with US-based UV startup SETi and then acquired that company in 2016. The company has pushed the technology forward and aggressively protected its intellectual property rights. 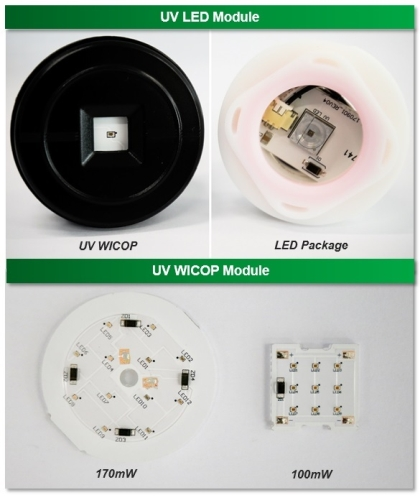 Now the combination of UV emitter technology and the WICOP manufacturing platform can potentially enable new applications that have awaited UV LED with longer life, higher power output, and reasonable costs. Seoul said its testing documented a potential lifetime of 45,000 hours whereas most existing UV LEDs are specified at lifetime under 10,000 hours. Moreover, the company said the development will deliver an 80% reduction in component cost relative to conventional UV LEDs with similar performance.

“Conventional UV LEDs have difficulty in expanding applications with low light power, short duration time, and high price,” said Jong Man Kim, UV development executive and vice president of Seoul Viosys. “The new UV WICOP of Seoul Viosys is expected to be a leading product that meets the needs of customers and contributes to market expansion for UV LED.”

Seoul has not revealed details of the UV WICOP components. Indeed, the announcement did not even detail the emission band. But Seoul did say the components had been tested in water and air purification as well as surface disinfection applications. That detail would imply that the offering will include the more difficult to manufacture UV-C LEDs that emit at wavelengths from 100–280 nm. Energy in that band can kill pathogens almost instantly.

The patent award is USP 8,242,484. It covers vertical high-powered package technology based on UV WICOP.

To understand more about the UV-C application and market opportunity, peruse a recent feature article we ran on the topic. While UV-LED technology is less mature than visible-light LED technology, the UV components have advanced substantially. Moreover, when you consider actual usage scenarios, the UV-LED option can offer favorable return on investment relative to legacy UV sources.