Cree says that its XLamp MPL EasyWhite LED, delivering up to 1500 lm at 75 lm/W and 250 mA, offers the performance, color consistency and lumen density to displace conventional light sources, all in the industry’s smallest package. 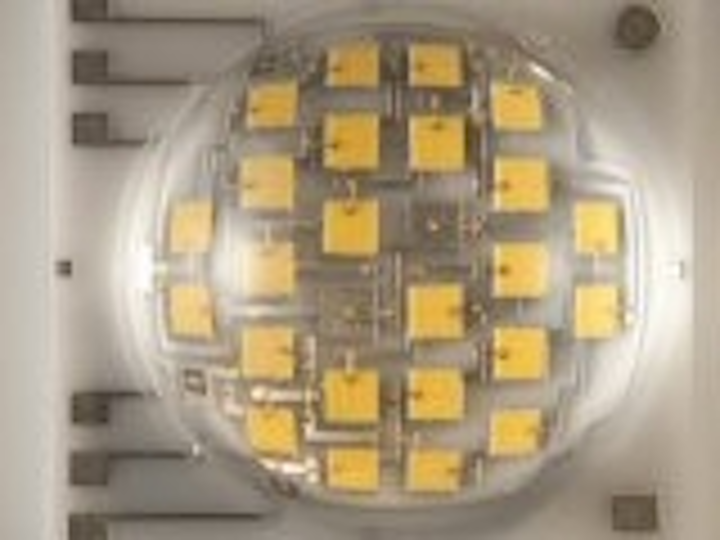 Cree has introduced a new multichip, "lighting class" LED which it claims can "obsolete" energy-inefficient light bulbs (provided that the LED is incorporated into an efficient lamp design). The XLamp MPL EasyWhite LED provides a powerful point-source in 4 color temperatures with a narrow binning structure.

The LED package contains 24 chips, each measuring 1.2x1.2 mm (2 mm2). As the image shows, these chips are crammed into an extremely small footprint of only 12x13 mm.

The device is designed to run at a relatively low current for such large chips, of between 150-250 mA. Cree says the LED can generate up to 1500 lm at 250 mA, when operating at 20W with 75 lm/W efficacy...more than enough to replace many conventional light sources.

Cree claims the MPL is 72 percent smaller than the nearest-competing LED component. Many companies have introduced multi-chip LED arrays in a single package, but often these arrays contain small chips. Also, in many devices all the chips sit under a single coating of phosphor.

In Cree's LED, each chip has an individual phosphor layer, and each such "white chip" is measured and characterized before being placed in the array. Cree is able to select chips with specific performance so that the overall color point of the MPL falls within one of a series of narrow bins. This is the so-called EasyWhite approach unveiled by Cree last year (see News).

Paul Thieken, Cree director of marketing for LED components, says that Cree is “providing the MPL LEDs the way the lighting industry has wanted to buy LEDs." Customers can specify the LEDs like traditional light sources—simply by indicating the desired color temperature and brightness.

It is worth noting, however, that the bins correspond to a 4-step MacAdam ellipse, which is sufficiently narrow for some lighting applications, but not for others.

The LED assembly appears complex in the photograph, which shows the wire binds and circuit connections, but as Thieken says, "this is complicated for the LED world, but not for the semiconductor industry." He also told LEDs Magazine that using a smaller number of larger chips "would not be technically impossible" but there are various trade-offs, not least the less-good color mixing with a large-chip array.

Fred Dorrani, president, T^3 Mark, Inc., an LED integrator specializing in light engines, says that Cree has "virtually eliminated the need to learn and understand LED bins thanks to EasyWhite color temperatures. Combined with the single-light-source design of the LED, it can simplify design and manufacturing, speeding overall time-to-market and improving product consistency.”

MPL EasyWhite LEDs are offered in 2700K, 3000K, 3500K and 4000K color temperatures (the latter offering a replacement for fluorescent sources). Due to the EasyWhite technology, the color space occupied by each of these color temperatures is 75-percent smaller than the total area of the corresponding ANSI C78.377 color bins. This can reduce component count and eliminate complex mixing recipes and the pixilation often associated with other LED designs.

The XLamp MPL EasyWhite LED is commercially available in volume now with standard lead times and in small quantities through authorized Cree distributors, as well as in sample quantities direct from Cree.