The XIM module is in the same form factor as prior Xicato round modules yet integrates sensors and communications for smart-lighting applications, while the thin XTM is compatible with Zhaga Book 3. 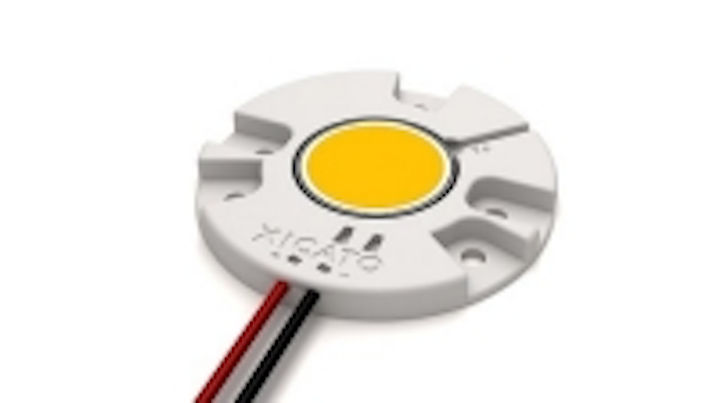 Xicato has introduced the XIM LED module that combines the company's remote phosphor technology with sensors and wired and wireless connectivity options that will enable manufacturers to simply add support for networking and adaptive controls to luminaires. The company also announced the XTM module recently that is much thinner than the company's prior products and is Zhaga compatible, yet the company states that the product is still based on remote phosphor for color consistency.

Color uniformity both initially and over the life of a solid-state lighting (SSL) product has been Xicato's core value proposition. Because the company's modular light engines use remote phosphor technology, the phosphor is separated from the heat-generating LEDs and therefore the phosphor doesn't deteriorate and shift in color. For more background on the technology and the modular space see our October 2013 feature on the topic.

To date, new products from Xicato have come in new lumen packages and better color quality in its flagship round and rectangular module families. At Strategies in Light Europe, however, CEO Menko de Roos revealed that the company was working on adding intelligence into its modules while keeping the form factor constant.

Now the company has formally announced the product. "We’re essentially putting the power of a smartphone into the module,” said de Roos. “A smartphone has about a dozen different sensors, including ambient light for the screen. With chip technologies, sensors, and networking protocols, we are enabling an Internet of Lights. The ability of light sources to communicate with each other, a management system, or with people in spaces sets the stage for a broad range of applications that improve a customer’s experience."

The new module includes a constant-current driver along with the light engine, sensors for light and occupancy, and connectivity features. In its press release, Xicato didn’t specify the network interfaces. At the recent Strategies in Light conference in Santa Clara, California, however, de Roos showed a block diagram indicating the presence of a DALI (digital addressable lighting interface) wired link and a separate wireless link.

The company has not detailed the XIM family offerings in terms of lumen packages and performance. Presumably it will match the existing product families over time. The company said the first products will be available in April.

Meanwhile, the announcement of a Xicato Zhaga-compatible module came as a bit of a shock. In the module feature article linked above, company executive Thor Scordelis said the dimensions of the Zhaga Books were not a match for the remote phosphor design and the performance the company wanted to offer with its modules.

Fast-forward six months and the company has announced the 5.6-mm-thick XTM that looks more like a chip-on-board (COB) LED in a holder than one of its prior modular light engines. Clearly the XTM has very little separation between the LEDs and the remote phosphor. Yet Xicato said the design includes a metal cooling ring that ensures the phosphor stays cool and the product delivers on the company's color uniformity promise.

While the company said the module is Zhaga compatible, it is not claiming compliance at this time. Xicato is not a member of Zhaga and has not put the product through certification testing.