With a decrease in UV-LED prices, ultraviolet (UV) light sources show great potential for a wide range of applications such as material curing1, phototherapy2, and disinfection3,4. In many cases, such light sources require optical elements to form a narrow-angle light emission or other desired light distribution. The optical elements can be produced out of inexpensive glass or silicone for visible light5, but for the UV spectral range this transmissive approach requires more expensive quartz glass. [For the purposes of this article, we are discussing UV spectrum over the 180‒400-nm range — essentially the UV-A (315‒400-nm) and UV-B (280‒315-nm) bands, and the 180–280-nm portion of the UV-C (100–280-nm) band.]

A potentially more-cost-effective approach uses metal-coated surfaces to reflect the light, which can be produced by depositing a thin — about 0.2‒0.5-µm aluminum (Al) layer — on a plastic mold6‒9. However, for many applications where high optical power densities above 1W/cm2 are required, such a reflector heats up and will exhibit damage due to surface modification, cracks, and even delamination.

In the following study, we demonstrate that by applying a metallic intermediate layer such as a combination of copper (Cu) and nickel (Ni) with a thickness greater than 30 µm, it is possible to dramatically reduce the maximum temperature of the reflector — in this experiment, from 117°C to 51°C — and obtain long-term stable operation of the reflector under high-power irradiation from UV LEDs. 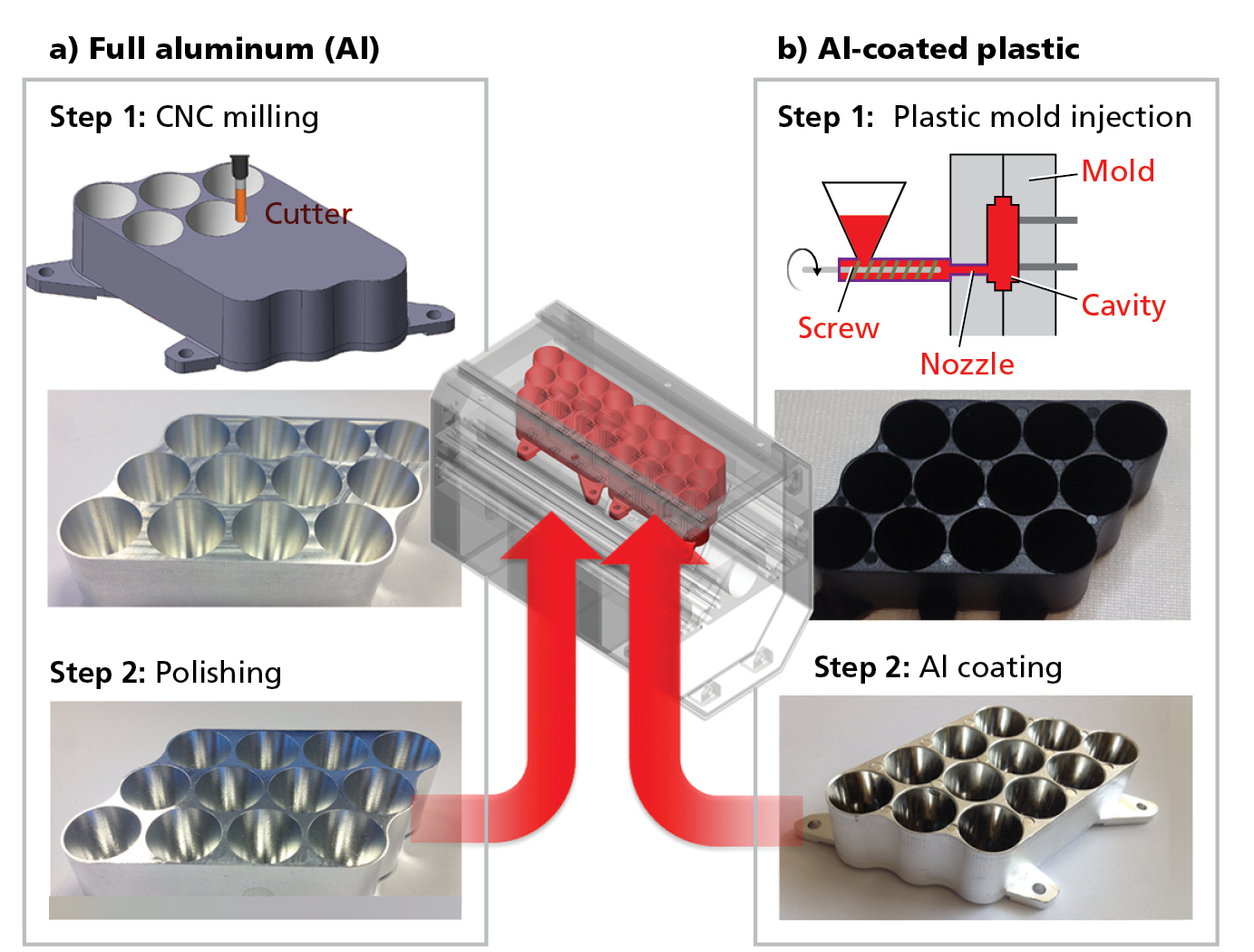 FIG. 1. Shown is an ultraviolet (UV) LED light source designed by OSA Opto Light with parabolic reflector arrays produced out of either full aluminum [Al; (a)] or a thin Al layer on a plastic mold (b). Image credits: All illustrations courtesy of OSA Opto Light.

OSA Opto Light recently developed a scalable UV-LED light source comprising LED plates and parabolic reflector arrays that are designed to be placed side by side to create a line up to 120 cm long. The parabolic reflectors cause the light to be emitted at an angle of about 20°, and under each parabolic reflector one to four LED chips can be placed. The middle of Fig. 1 shows the shortest available module and the two approaches we have tested to produce the array of Al parabolic reflectors. On the left side, the reflector array is produced out of a full-Al material by computerized numerical control (CNC) milling followed by a surface polishing step. The polishing step is required due to the rough Al surface after milling. On the right side, the reflector array is produced by coating an Al layer on a plastic reflector mold. The plastic mold injection was performed at Khatod with polycarbonate (PC) and the Al coating was about 0.2 µm thick. This approach does not require any polishing, thus keeping production costs low. The table summarizes the advantages and disadvantages of each production technique.

The metallic reflectors produced in this study were investigated regarding coating thickness with a scanning electron microscope and a focal light microscope. Some reflectors were tested in a small LED unit with two reflector arrays similar to the one shown in Fig. 1. An infrared (IR) camera and thermometers were used to study the temperature during operation of the devices, and a gallium phosphide (GaP) detector was used to examine optical output.

Fig. 2 represents examples of the effect that high-power UV irradiation has on the thin Al film coating the plastic reflectors. The upper images (a) show how the Al surface deformed under the influence of 1W (365-nm) irradiation for 5000 hours. Initially, the surface roughness had a maximum pit height of less than 1 µm, which increased after UV irradiation to about 6 µm. The lower images (b) show how the UV irradiation caused cracks at the bottom of the reflector array after a few hours of operation at an optical power of 1.5W per parabolic reflector (390 nm).

The appearance of surface roughness and cracks on the Al-coated plastic reflector seen in Fig. 2 is related to the high temperatures that develop at the Al layer. Since the plastic has a low thermal conductivity — e.g., 0.2W/mK for PC10 — the main heat transport path is through the Al layer. However, since this layer is only 0.2 µm thick, under high-power UV irradiation it cannot conduct all the heat absorbed; thus, under such UV irradiation, temperatures can exceed 100°C. Attempts to coat the plastic mold with a thick Al layer mostly result in rough layers that have diminished optical quality or even delaminate7,11. The approach we took in this work was to deposit a thick intermediate layer such as Cu and Ni combined or chrome (Cr) alone by electroplating on the plastic mold and afterwards lay the Al coating on top. 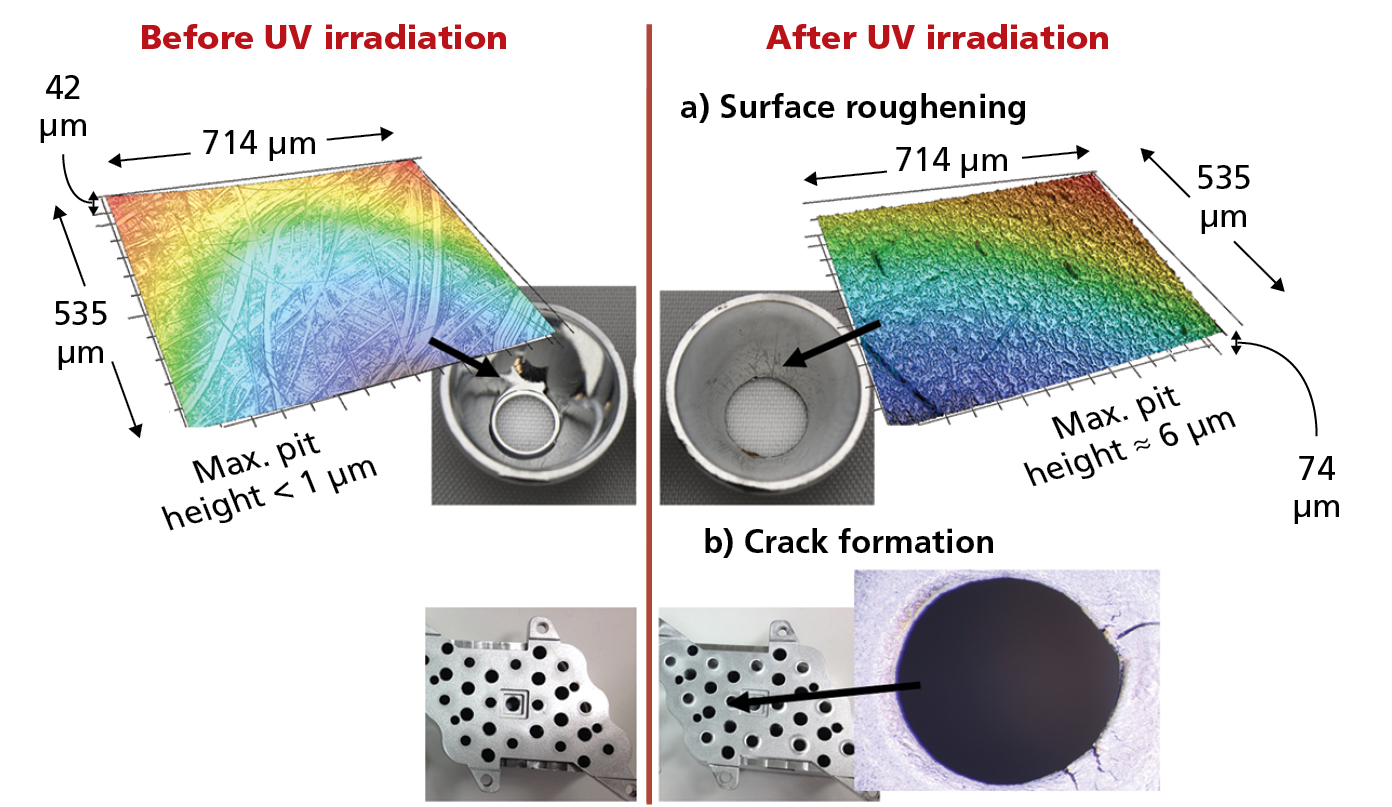 FIG. 2. Degradation effects, such as a) surface roughening or b) crack formation, were seen on an Al-coated plastic reflector due to UV irradiation. 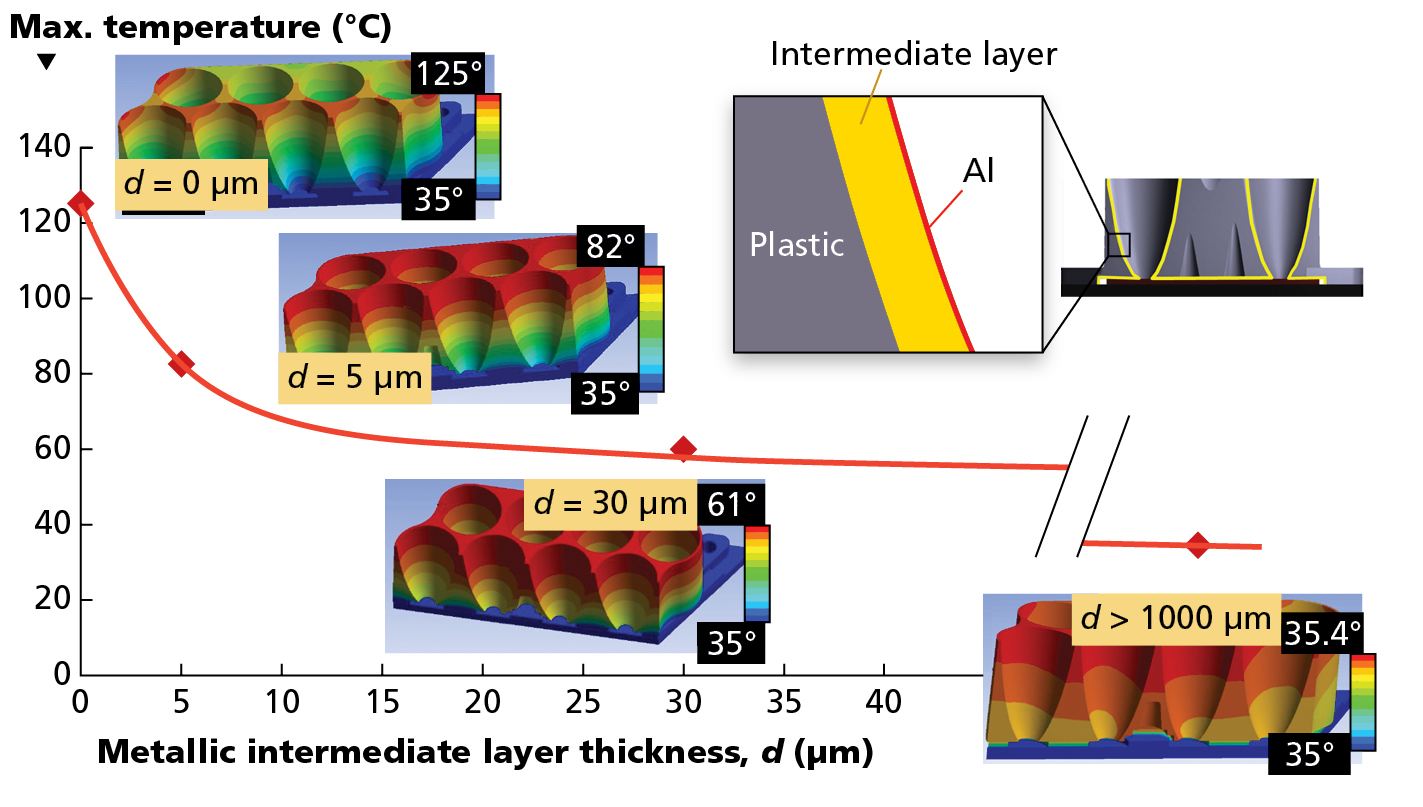 FIG. 3. Maximum temperature was obtained on a parabolic reflector array irradiated with UV light as a function of the metallic intermediate layer thickness, simulated with ANSYS 19.1. A diagram of the intermediate layer underneath the thin Al layer can be seen in the upper-right corner. 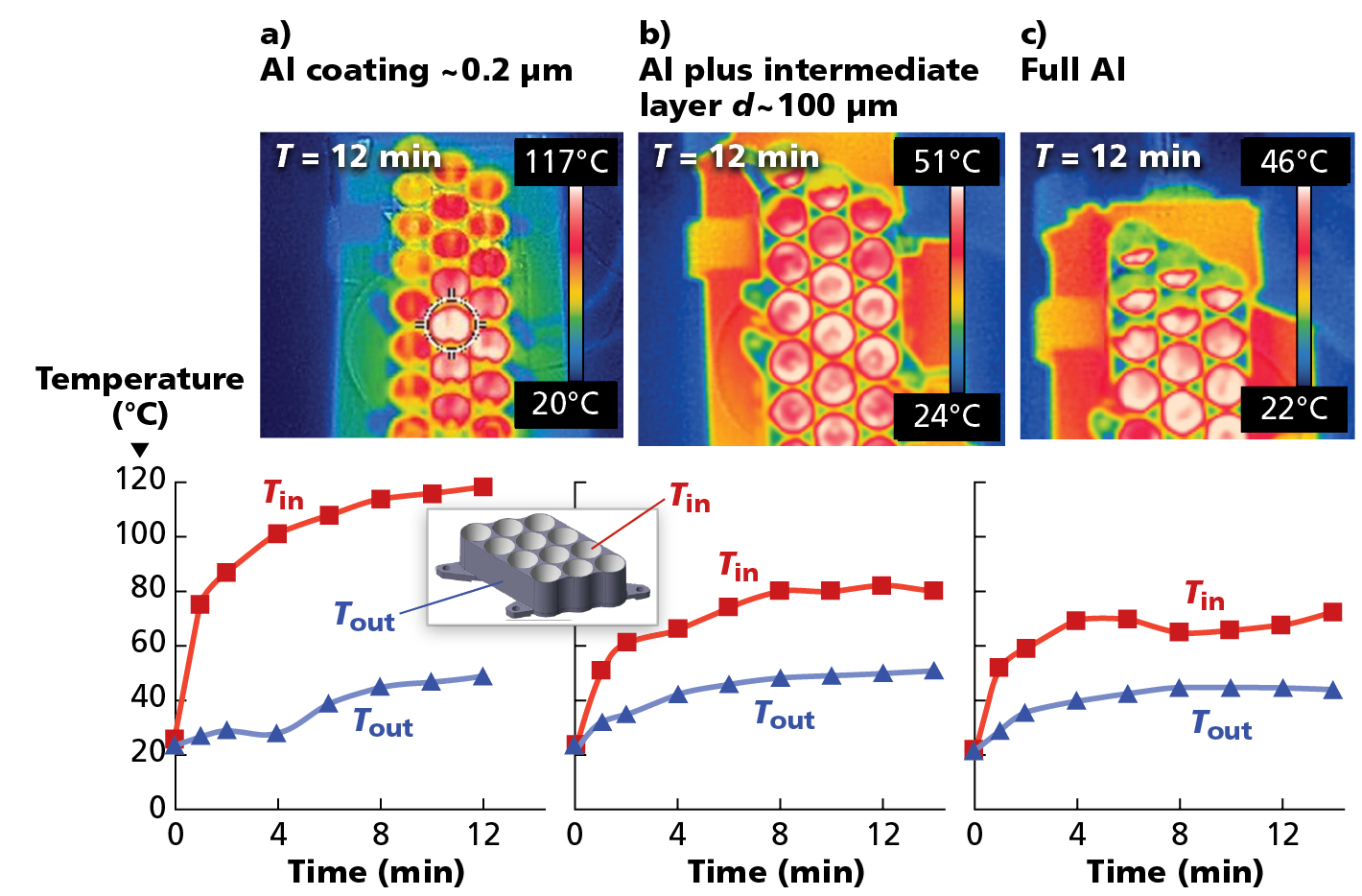 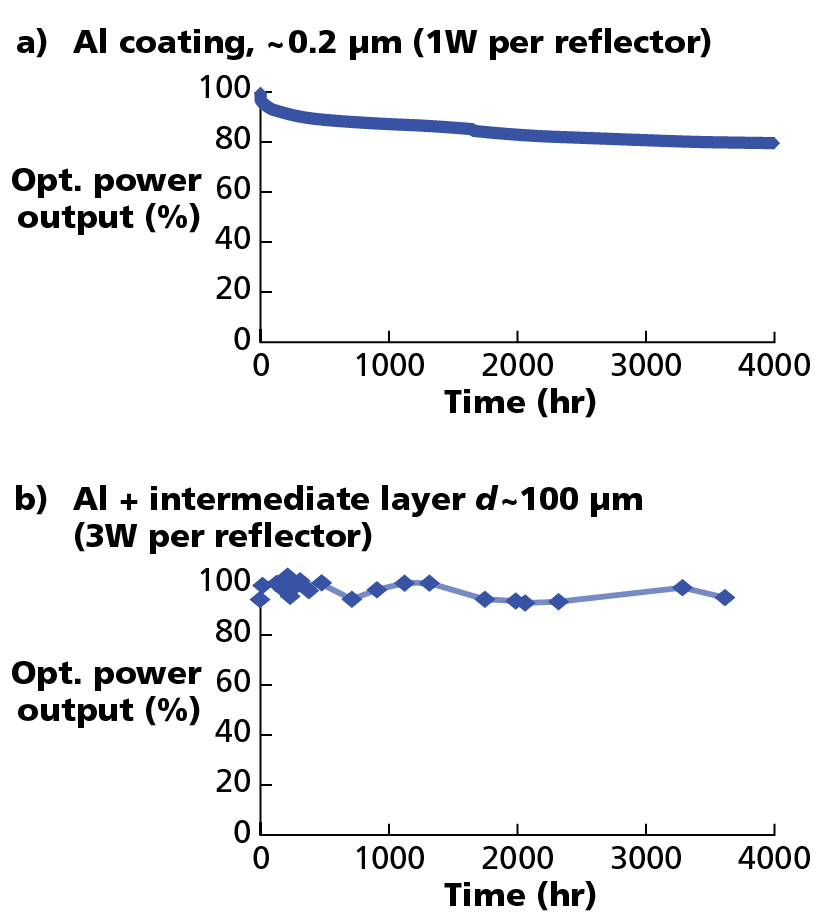 In the framework of this study, our team has demonstrated that adding a metallic intermediate layer to an Al-coated plastic reflector is a promising approach to achieve a high-power-compatible UV reflector with excellent heat conductivity properties. Using a finite-element thermal simulation, we were able to confirm that the intermediate layer thickness should be greater than 30 µm to achieve optimal performance. The reduction in reflector temperature is shown to significantly improve the lifetime of this optical element with no degradation observed under harsh UV irradiation conditions for 4000 hours. This technological solution is expected to smooth the way for next-generation, high-power UV light sources.

The authors wish to acknowledge the financial support for this work provided by the German Federal Ministry of Education and Research within the program “Twenty20 ‒ Partnership for Innovation.”

Special thanks go to Rolf Baldauf for executing the thermal simulation with ANSYS 19.1; Holger Rhein from PVcomB for performing focal microscopy measurements on some reflectors; and the team at OSA Opto Light for supporting the research and development activities.

M. WEIZMAN, A. RUH, S. CINQUE, P. ROTSCH, and W. ARNOLD are with OSA Opto Light GmbH; S. NIELAND is with CiS Research Institute for Microsensors; and C. TODARO is with Khatod.