LED lighting provides simple and elegant solutions to the problems encountered with trying to provide suitable lighting for marinas. 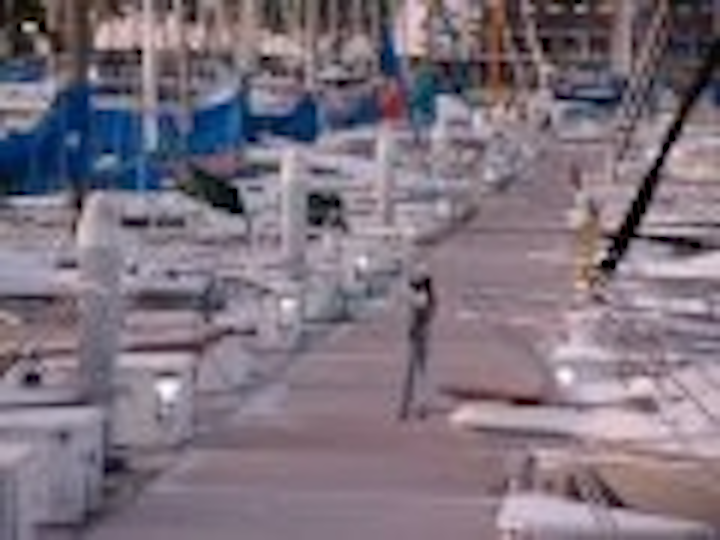 Coming into dock at twilight after a sun-drenched day of sailing, you tie down your boat with ease due to the well-lit marina your 30-footer calls home. You have just arrived at your slip at the Dana Point Harbor, which uses Permlight’s LED products -- Enbryten Walkway and Enbryten PostNLite -- as its lighting solution.

Like many marinas throughout Southern California, Dana Point Harbor wanted a maintenance-free slip light that would keep boats from hitting the slip at night and to keep people from falling in the water. Most harbors and marinas use small 7-14W fluorescent lights to illuminate the slips. However, the vibration generated by boats and waves hitting the docks causes florescent bulbs to break, making them a constant maintenance issue.

The Enbryten Walkway and Enbryten PostNLite fixtures are being used in marina lighting applications to replace problematic and short-lived fluorescent lights, and they are a perfect solution to the problem of broken light bulbs. Additionally, the LED lights consume only 5 watts and are warranted for 3 years with an expected useable lifetime of 7-10 years. These LED-based systems feature replaceable module technology and a lifetime as long as most people will own their boats.

Dana Point Harbor is currently using LEDs to light the Catalina Express Landing and in the remodeling of their boat slips. Prior to installation of the LEDs, Catalina Express was unlit. The PostNLite technology works as a decorative lighting element that blends in well with the design of the area, and also as an unobtrusive light source that consumes little or no power and is easily installed by tapping into already available power. At the boat slip test-site there were continual problems with the fluorescent lights on the dock boxes (the boxes into which shore power comes, and where valuables are locked up). Permlight's Enbryten Walkway fixtures were easily installed onto the side of the boxes, replacing the fluorescent lighting. The Duffy Electric boat rental area in back-bay Newport is also lit by LED lights. The rental facility had no lighting on its shore power stands that are used for charging boats, so LED lights were used to add light to the charging stations. As the holidays approach, more and more people rent these boats at night time to view the decorated boats in the harbor. Enbryten Walkway was conveniently installed on the shore power stands and they instantly added light.

Not only do LED fixtures provide a low cost and energy-efficient alternative to florescent lighting, they also aid in preventing the contamination of our harbors from the mercury used in florescent-light production.

Recent studies suggest that approximately one-third of the mercury entering the atmosphere comes from natural sources, such as volcanoes and forest fires. The remaining two-thirds came from pollution caused by human activity: approximately one-third as a by-product of energy production through the burning of coal, and the remaining one-third from the intentional use of mercury in products such as florescent lights.

When mercury is deposited in harbors, lakes or waterways, the bacteria in the water converts it to methyl mercury and it strongly affects both humans and wildlife. Methyl mercury accumulates in algae and is eaten by smaller fish, which in turn are eaten by larger fish. Fish at the top of the aquatic food chain have been tested to be infected with methyl mercury concentrations as high as 130,000 times that of the surrounding water! Unfortunately, the mercury in fish also concentrates in the tissue of any human or animal that eats the fish. If contaminated fish are eaten on a regular basis, mercury concentrations can become high enough to become a serious health threat to humans.

By simply changing from fluorescent lighting to LEDs, you can help reduce mercury pollution in the environment. LEDs are a good choice both environmentally and economically as they are energy-efficient, which means they require less power and have a longer life span than other lighting products.

Permlight was recently selected by the editors of GreenSpec and Environmental Building News as having one of the Top-10 green building products for 2005. The Top-10 products are chosen from a wide variety of green building products added in 2005 to the GreenSpec Directory, published by BuildingGreen, Inc. Products are listed in GreenSpec because they have passed a set of environmental criteria set by the editors. Enbryten LED Luminaires are an energy-efficient and low-cost alternative to traditional lighting as well as being an environmentally friendly source of lighting.

When you think about the hundreds of marinas along the California coast, the idea of using LEDs as both an environmentally friendly and energy-saving source of lighting makes a lot of sense. So the next time you are out on your boat enjoying a day at sea, you can rest assured that LEDs are not only providing a safe and efficient way to light your dock, but are also providing a guiding light to a safer and healthier environment.