A brief interaction on our Twitter feed leads to introspection about the changing stream of data informing commercial R&D — and our reporting.

We all have different experiences with and opinions of social media. On a daily basis, I am alternately inspired, disgusted, and flummoxed by some of the interactions that I witness. However, it occasionally brings me satisfaction when folks use social media to interact with our brand team in a compelling commentary. I enjoy engaging with people who spark thoughtful debate rather than snark and controversy (I am too old for drama). It helps to see various angles on issues of interest to the LED and lighting industry.

Recently, we were mentioned by a Twitter follower, Dr. John Barentine, scientist and director of public policy at the International Dark-Sky Association. (You can find us @ledsmagazine.) Barentine has a rather diverting Twitter feed himself; so if you’re interested, you can follow him too @JohnBarentine. I’ve included a snapshot of the original tweet below for reference due to technical difficulties; you can find the thread at https://twitter.com/JohnBarentine/status/1173620966921916416. (Hopefully I will be able to update this later with the full digital experience.) 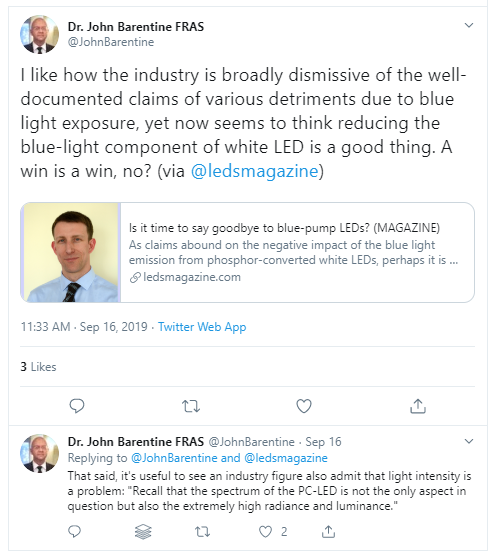 The article that Barentine is referring to is our most recent Last Word column, contributed by Leslie Lyons, a technical consultant with Bentham Instruments. In the column, Lyons posits that perhaps the time has come to consider developing packaged LEDs that utilize methods other than blue-pump phosphor technology, given continual studies on the effects of blue-rich white light. But he also observes that there are multiple factors in assessing any potential light hazard, such as radiance and luminance of the light source, and consequences to all engineering decisions. These considerations, he notes, are crucial to evolving LED design. Note that he is not taking a hard line on circadian impact, but eye safety is well within his wheelhouse (see editor’s note below).

Let me say that I don’t think Barentine is flat wrong in his assessment of the lighting industry’s past stance on blue light based on his experience with past commercialized products and our collective outdated knowledge base. I disagree with the generalization of a collective industry fault (for one thing, Lyons isn't representative of an entire industry group), because we need to acknowledge that the lighting community had mainly relied on the evidence across various studies supported at the time. Still, research has repeatedly cleared blue-pump-based illumination of harm to the eye in standard lighting scenarios (meaning, you didn't stare into the light source for a prolonged period but light was produced and directed appropriately). But R&D didn’t halt there. How is the industry to excel at designing and implementing new solid-state lighting (SSL) products if it doesn’t evaluate past methods, experiment with various designs, and seek improvement? It would be irresponsible to think that there could be no shift in strategy and design based on continual investigation.

As a publication, we've never believed in ignoring concerns with LED-based technology but have focused on addressing those concerns with available test and measurement conclusions. And we continue to report on new findings as we are able to establish the credibility of the expertise behind them. We look forward to more fresh views on how to achieve new levels of quality, safety, and performance in LED and SSL technology. And thanks to John for inspiring this blog today.

Editor’s note: If you’re not familiar with Leslie Lyons, he has extensive background in photobiological safety, optical radiation safety, and test and measurement, and is a member of several key technical committees that develop and update industry standards. Since 2011, he has contributed several articles to LEDs Magazine on the potential hazards of optical radiation, the implementation of safety standards for LED-based products, and how these standards continue to be evaluated to address new products and concerns in photobiological safety. Feel free to geek out on this technical content! (Part I of his initial series is a good place to start, but he also wrote an article on the IEC’s evaluation of the retinal blue-light hazard in 2014, as well as a 2015 follow-up on risk-group classification with regard to LED arrays and light engines.)