Sharp has leveraged its COB Zenigata LED family to support dim-to-warm lighting while Toshiba has a new high-power GaN-on-Si LED and Everlight adds 95-minimum CRI versions of its COB family. 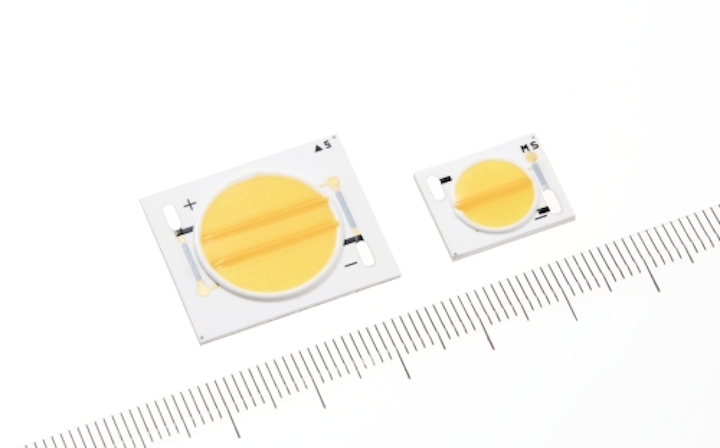 Sharp has leveraged its COB Zenigata LED family to support dim-to-warm lighting while Toshiba has a new high-power GaN-on-Si LED and Everlight adds 95-minimum CRI versions of its COB family.

Warm dimming, where an SSL product mimics the color shift of an incandescent source during dimming, has been a hot technology over the course of the last year. Typically, lighting companies implement the dimming scheme at the system level. For example, Cree supports the concept in its Sunset Dimming LED module family using the mix of off-white and red LEDs that the company also uses to deliver 90-CRI or better performance. Some products even mix more LED colors to achieve the desired color curve.

Sharp, however, is supporting the dim-to-warm concept with a single COB LED. The company has previously supported tunable color across a broad range of Tiger-branded discrete and COB packages by mixing two phosphors, implemented as stripes, on a single package. But those LEDs have required the system designer to control the two separate drive channels. 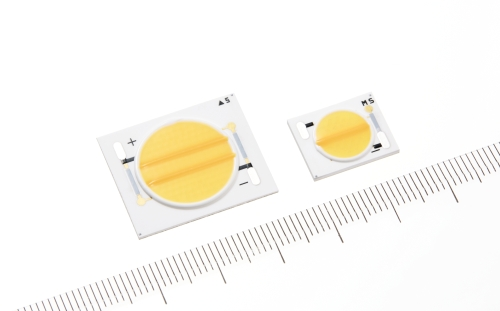 The Natural Toning family includes LEDs in both the Zenigata Mini (12×15 mm) and Mega (17-mm light emitting surface – LES) series. And in either case, Sharp has implemented the control logic to vary the CCT on chip so that the driver electronics need only to reduce the current to achieve the warm-dimming performance.

For example, the Mini version of the family delivers 1000 lm at a CCT of 3000K when driven at 350 mA. When that drive current drops to 50 mA, the output is 105 lm at 2000K. The Mega version performs similarly at higher output levels near 3000 lm at maximum drive current. Sharp is rating the LEDs in the 92–94 CRI range across the color curve.

Meanwhile, Toshiba is taking the next step in trying to pioneer the GaN-on-Si technology area. As we have covered before, the use of a low-cost silicon substrate has the potential to reduce LED cost both based on substrate cost and the use of fully-depreciated silicon fabs in the back end of the LED production process. 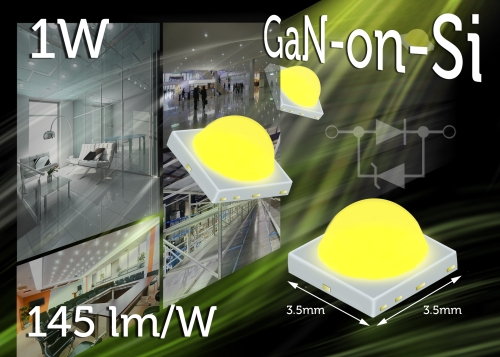 The latest Leteras products are in a 3.5×3.5-mm package with a primary optic integrated on the package. The LEDs come in at the low end of the high-power LED segment with typical flux ratings of 112–145 lm. Toshiba expects the LEDs to be used in applications ranging from fluorescent-replacement tubes to downlights to street lights.

We've yet to see broadly-sold commercial SSL products that use GaN-on-Si LEDs from Toshiba or other players such as Lattice and Plessey. But the specifications of the new Toshiba products are impressive in terms of forward voltage (2.85 typical) and thermal resistance (5°C/W). Still, the LEDs continue to trail the market in flux output.

Across the LED sector, the interest in high-CRI lighting continues to grow. Applications such as hospitality and retail, among others, demand excellent color rendering, pushing LED vendors to deliver more LEDs with 90 CRI or better. 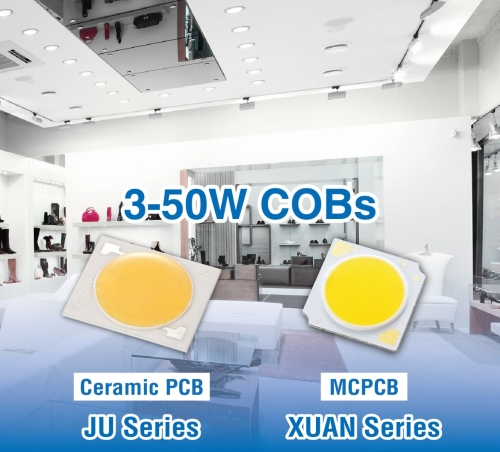 Everlight has moved to address the high-CRI demand with its Natural Light technology. The offering will include LEDs in the Ceramic (JU Series) and Metal (XUAN Series) of LEDs immediately and the company said it will bring the technology to all of its LED families later this year.

Everlight said the typical CRI in the family will be in the 98 range and the company will specify a minimum 95 CRI. The name of the product family is meant to evoke thoughts of sunlight and the 100-CRI ideal for lighting.