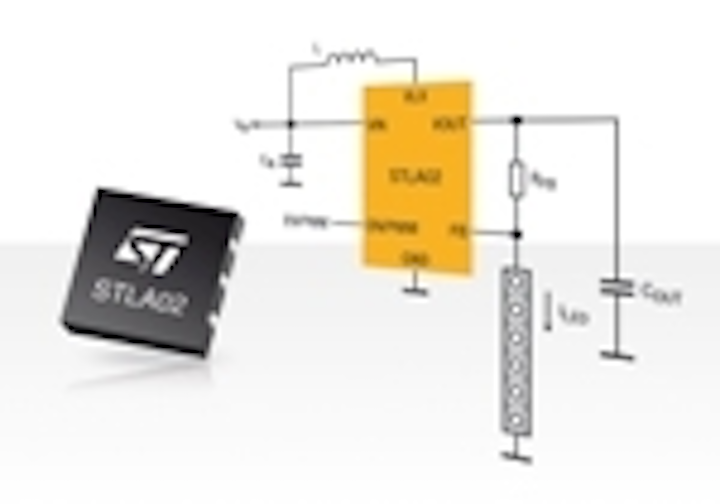 STMicroelectronics introduced the STLA02 driver that can power six LEDs for backlighting in applications such as smartphones, portable gaming devices, and GPS receivers. Semtech has announced the SC5010 phase-shifted LED backlight driver for notebook and tablet applications with displays as thin as 4 mm.

The STMicroelectronics STLA02 IC can operate from battery supply voltages ranging from 2.5V to 18V and deliver 20 mA to the 6-LED string. The wide input range allows the device to operate from varied battery types including single lithium cells.

As the nearby figure shows, the IC requires a minimum number of external components. The IC integrates current-sensing capabilities via a feedback pin that relies simply on a feedback resistor on the high side of the LED stack. The low side is connected directly to ground. The driver includes over-voltage, and over-temperature protection.

Semtech, meanwhile, is targeting larger devices with its new driver that can drive 8 strings of LEDs with up to 14 LEDs per string at 30 mA. The company says that its driver can work with smaller inductors than competitive products enabling thinner displays.

The boost-based driver topology utilizes what the company calls a "sophisticated control loop architecture" to allow efficient operations with 2.2 μH inductors that are only 1-mm high. Athar Zaidi, director of marketing in Semtech's Power Management Group, said, " Now, for the first time, ultrabook PC manufacturers can place efficient, phase-shifted LED drivers where they prefer them - next to the display, which, until now, has been a roadblock for ultrabook and other very small form factor PCs."

The driver also utilizes a phase shifted approach to driving different LED channels so that not all channels are powered on at any given time. There is a detailed article on the technique in the October 2011 issue of LEDs Magazine on page 77.

The driver supports PWM-based dimming over a 5000:1 range. It includes over-voltage, over-temperature, and under-voltage protection. Efficiency is up to 92% depending on the design and switching frequency can vary between 200 kHz and 2.2 MHz.