Emergency LED lighting from GDS and its ArcSystem can become a functional and integral part of the house lighting system in public venues such as the Wembley Arena in London. 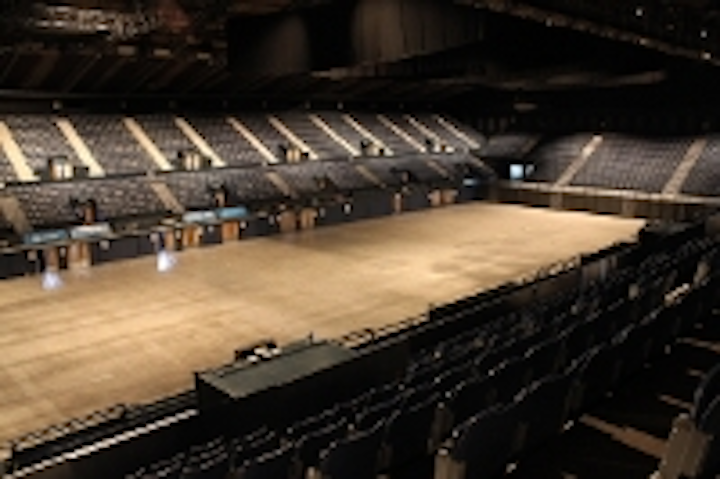 GDS (Global Design Solutions) has announced that the famed Wembley Arena in London now relies on 44 Arc eight-cell LED fixtures for emergency lighting. But the efficiency and functionality of solid-state lighting (SSL) will allow the arena to utilize the emergency lighting as a functional cog in the overall house lighting.

The nearby photos show the results with the new emergency lighting alone illuminating the arena. The system can run from either AC line power or a separately maintained emergency power supply, providing crowd safety in the event of a power failure.

It was the need for better emergency lighting that prompted Wembley management in consultation with Fagan Electrical to consider a transition to LEDs. Fagan recommended the Arc fixtures with eight light cells and chose GDS distributor White Light to supply the products.

Wembley is famous for high-profile events including Beatles concerts, and demanded both better lighting and better efficiency for sustainable energy use. Fagan recommended the ArcSystem as clearly capable of delivering the requisite light while also including inherent support for wireless controls and smooth dimming over the range of 0–100% for maximum energy savings.

The Arc SSL products over-delivered on the required light levels. "The Arc fittings brought the safety lighting levels in the arena up to a very impressive level," said Simon Needle, special projects director of White Light. "Testimony to this is that the venue management were actually prompted to employ the system as part of the regular house lights — further recommendation of the quality on offer."

Indeed, Wembley is planning a second phase of the project. In that phase the installed emergency ArcSystem lighting will be an integral part of the overall scheme. The LED sources offer the efficiency and dimming capabilities that make them equally effective in a variety of roles. The fixtures will be part of the house lighting and used when workers are performing cleaning and maintenance tasks, while also serving in the emergency role.

The ArcSystem is built around a modular luminaire that GDS calls a Cell. The Cell can be recessed into housings installed in ceilings or installed in suspended housings. The ArcSystem includes rectangular housings that hold as many as eight Cells such as the fixtures used in the Wembley project. The Cells each integrate a third-generation Bridgelux LED array, along with the reflector and lens options for a variety of beam patterns.