The efficacy target set by the US Congress for the DOE SSL competition remains unattainable in the short term, prompting the energy agency to suspend the PAR38 L Prize race. 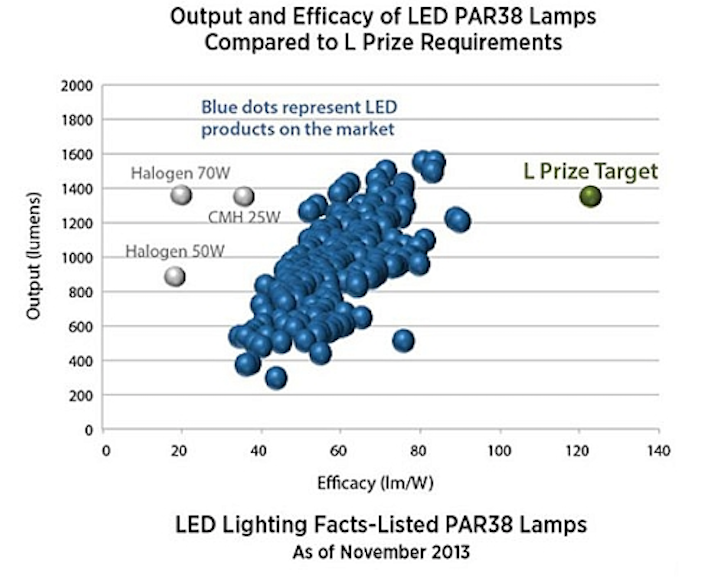 The US Department of Energy (DOE) has announced the suspension of the Bright Tomorrow Lighting Prize (L Prize) competition for LED-based PAR38 lamps meant as replacements for halogen bulbs. The suspension is the second such occurrence in the PAR38 competition and was due to what the DOE said are efficacy requirements that aren’t likely to be achieved in the near term. The DOE has adapted some other requirements of the competition, but the efficacy requirement of 123 lm/W was established by an act of the US Congress and can't be modified.

The L Prize was always intended to be a program with stretch goals that led the solid-state lighting (SSL) industry to achieve greater energy efficiency. Even the A-lamp competition that Philips Lighting won in 2011 had an efficacy requirement of 90 lm/W. Presumably, the directional nature of PAR38 lamps should allow manufacturers to make even more efficient products relative to omnidirectional A-lamps. 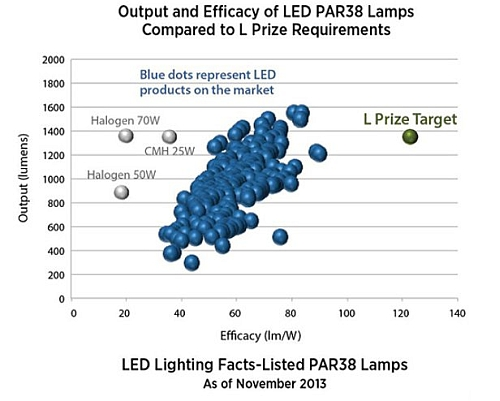 The DOE first suspended the PAR38 program back in 2011, saying it would apply lessons learned in the A-lamp competition to modify requirements of the program. The agency relaunched the competition in 2012 with a reduction in the number of sample lamps that had to be manufactured and a lower tolerance requirement in light output. Then in August of last year, the agency expanded the maximum allowable beam pattern from 12° to 15°.

Still, the Congress-mandated efficacy requirement has remained unchanged and no company has signaled an intent to enter the PAR38 competition. The DOE reported that PAR38 lamps available on the market and listed in the agency's Lighting Facts Program fall far short of the efficacy goal. Indeed, the lamps with the best efficacy fall in the 90-lm/W range, prompting the DOE to reevaluate the competition.

The DOE said that it would consider reopening the PAR38 competition in the future. The Congressional act that set the efficacy requirements also set aside $5 million that would be awarded to the company that won the PAR38 L Prize. Moreover, the winner would have access to sell the winning lamp to the US government in relatively large volumes.

Looking back, however, it's unclear how Philips Lighting profited from the L Prize win in the A-lamp category, beyond of course the $10 million prize. Certainly Philips is among the leaders in the LED retrofit lamp market. But the design that won the L Prize is no longer actively used. Without question, Philips has been able to apply lessons learned in the L Prize endeavor to its evolving product line. But while the L Prize lamp was a superior performer, the remote-phosphor look, evident heat sink, and high component costs made it only a moderate success in the market.