In architectural lighting, interchangeable tertiary lenses can offer a significant advantage over other optical systems, as THOMAS SCHIELKE explains. 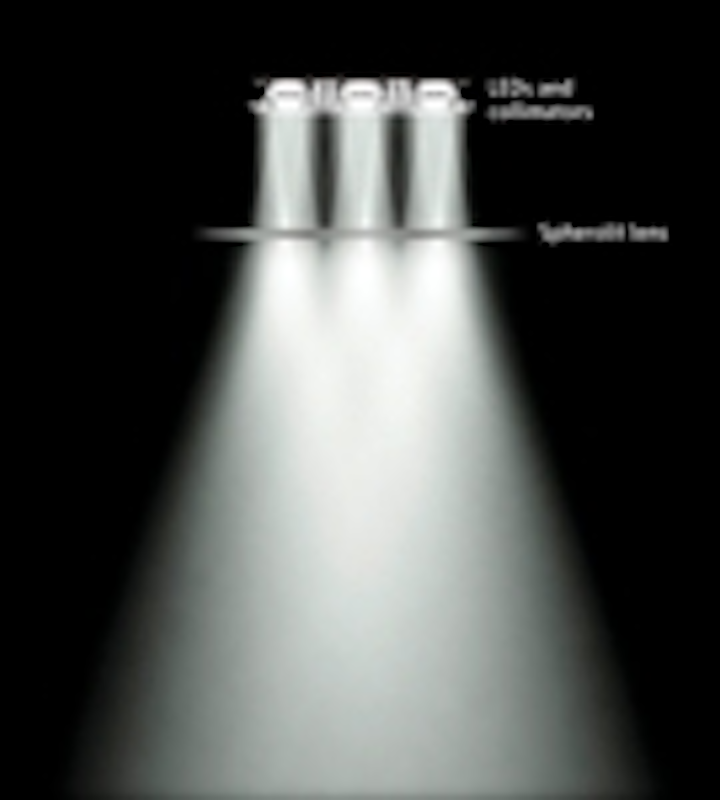 Discussions concerning the efficiency of LED lighting largely revolve around the high luminous efficacy of the semiconductor light sources. As a result, the potential of the light-guidance system is often pushed into the background. However, while the development of increasingly more efficient LEDs occupies the research laboratories of the major corporations in the electronics industry, the optimisation of LED technology gives luminaire manufacturers the chance to optimize their own lighting engineering and to provide users with definite advantages in terms of lighting quality, flexibility and economic efficiency.

The optical systems for LED lighting products are very different from conventional luminaires with reflector technology. Because transmission with lenses is more efficient than reflection with reflectors, LED luminaires fitted with the appropriate lens systems deliver a better light output ratio. In architectural lighting, interchangeable Spherolit lenses offer the big advantage that differentiated light distributions can be obtained. Alternative lenses can be exchanged simply to suit altered lighting tasks with one and the same luminaire.

As described in this article, lighting manufacturer Erco has developed Spherolit lenses for LED optical systems.

Spherolit technology is based on dividing up a large lens surface into individual, three dimensionally domed facets that control the light using refraction. By individually shaping each “spherolite” facet, the characteristics of the lens can be extensively controlled. Depending on the curvature of each individual facet, the parallel incident light is dispersed to a greater or lesser extent. This results in different lenses that, for the same basic geometry, can have different beam angles ranging from “narrow spot” to “wide flood.” Made of optical polymer, the lenses are extremely high precision components and place exacting demands on tool making and on manufacturing via the injection-molding process.

The quality of an optical system has a major influence on the overall efficiency of an LED luminaire. The combination of an LED lens, collimator and Spherolit lens can provide a very high performance and flexible system in architectural lighting (Figs. 1 & 3).

A collimator, made of an optical polymer and acting as a secondary lens, forms the link in the chain between the LED lens on the printed circuit board, as the primary lens, and the interchangeable Spherolit lenses as the tertiary lenses. The collimator aligns the light of the LED chip, with its hemispherical light distribution, into a parallel beam so that the required light distribution can then be formed by the replaceable tertiary lens.

This approach offers the practical advantage that in situations where the use of the lighting is always changing, such as in exhibitions or in showrooms, the light distribution can be altered to suit the lighting task thanks to an interchangeable system. By exchanging the tertiary lens from one that gives a narrow beam for accent lighting to one with a wall-washer characteristic for vertical ambient lighting, it is an easy matter to modify the lighting concept and the atmosphere in the room.

Clip-mounted Spherolit lenses allow both lighting professionals and ordinary users alike to alter the light distribution. The sensitive interface between the LED chip and the collimator can be precisely and cleanly fitted in the factory, while the easy exchangeability of the Spherolit lenses gives the user the benefit of adjustability in actual usage situations.

Depending on the design of the collimator, the rays of light are formed into a parallel beam via total reflection at the edge surfaces or even in combination with a middle lens section. The advantage of collimators, which function solely by total internal reflection, lies in their high efficiency. In terms of production engineering, the normal injection-molding process is faced with the challenge of having to ensure that component thicknesses are as uniform as possible. This is to avoid what are known as sink marks, which occur as the component cools down, and could otherwise impair the guidance of the rays from the LED.

In contrast to normally- used collimators, therefore, the middle lens section in this case is replaced by a Fresnel lens of reduced component thickness in order to simplify the injection molding process (Fig. 4).

However, the very narrow-beam light distribution of LEDs presents a particular challenge. According to the law of conservation of geometrical optics, a relatively large emission surface is required for the very small luminous surface of the LED chips.

To enable a normal injection molding process to be used for this collimator too, a special variant has been developed that uses double total internal reflection to allow a relatively uniform component thickness (Fig. 5). This principle also enables a more efficient light guidance for very narrow beam angles using readily obtainable systems with a combination of reflector and lens.

Pins positioned on the collimator facilitate precise and fast installation on the PCB using screws or clips. The screwed-on attachment to the heat sink also forms a thermal connection, providing heat management for the LED chips.

The actual light distribution, which may be narrow beam for accent lighting or wide beam for flood-type lighting for instance, is determined using Spherolit lenses as tertiary optical systems (Figs. 6a. & 6b.). Axially-symmetrical Spherolit geometries can produce oval beams, allowing elongated sculptures or tables to be illuminated with just one luminaire, whereas asymmetric Spherolit forms can be used for uniform wall-washing. The Spherolit geometries have been designed to give beams that are particularly uniform and without striations, while having clear, slightly softened edges. To help the user identify these lenses, which often look very similar, the edges of the Spherolit lenses are labelled with the name of their particular characteristic.

Compared to systems that only use one collimator, this approach using collimators and tertiary lenses does produce losses due to reflections, albeit very low losses.

However, this is far outweighed by the benefits in terms of increased flexibility in use. To obtain a different light distribution, it is not necessary to have another luminaire, but just to use a different Spherolit lens. Furthermore, the more complex optical systems such as “oval flood” or “wall wash” cannot be achieved using pure collimator technology.

Conventional point-light sources such as low-voltage halogen lamps or high-pressure discharge lamps emit their light in a solid angle of virtually 360°, whereas LEDs, which are directed by nature, emit their light in a solid angle of <180°. This means that losses due to spill light or light emitted towards the lamp holder are avoided. Furthermore, since transmission via lenses is more efficient than reflection via reflectors, the use of a lens results in a better light output ratio, which in turn has an effect on the resultant luminous flux from the luminaire.

Unlike with conventional lamps, such as high-pressure discharge lamps, it is expected that the future will bring further considerable increases in the luminous efficiency of LEDs. Every efficiency increase in the optical system will therefore act as a multiplication factor and make an even more significant difference.

For project-related simulations and calculations, all luminaires are measured in the lighting laboratory and are available as virtual luminaires complete with the relevant photometric data and 3D geometry.

The lighting engineering system of LED lens, collimator and Spherolit lens provides lighting designers with a flexible toolbox for highly varied lighting tasks. The wide selection of photometric characteristics, consisting of point-symmetrical, axially symmetrical and asymmetrical, lays the foundation for qualitative lighting design and efficient visual comfort. For this technology to develop, it was essential for various departments to be brought together at one location: development (with its capabilities in lighting simulation), tool making and plastics processing, complete with all their technical expertise of the manufacturing process. This cooperation has enabled the system design to be improved in a holistic manner and has allowed the efficiency of the optical system to be optimised by fine-tuning.