A uniform spectral power distribution was associated with improved sleep patterns and heightened daytime alertness in a laboratory study at the University of Basel in Switzerland. 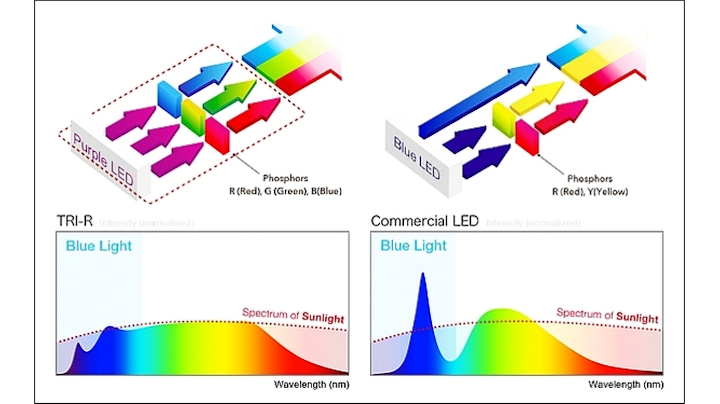 The University of Basel in Switzerland has published research titled “Effect of daylight LED on visual comfort, melatonin, mood, waking performance, and sleep” that was based on a study of volunteers who, in two separate test sessions, were exposed to Seoul Semiconductor SunLike LEDs in one session and to conventional white LEDs at the same CCT in the other session. The volunteers exposed to the uniform spectral power distribution (SPD) of the SunLike LEDs experience better sleep patterns and reported improved visual comfort and heightened daytime alertness.

The university published the research in the Journal of Lighting and Research Technology. Professor Christian Cajochen led the research team investigating what they referred to as LEDs with a daylight spectrum. As we have written previously, the SunLike LEDs attempt to mimic the SPD of the sun within the human visual range, offering what Seoul has characterized as natural light.

The tests at Basel involved 15 young male volunteers that twice spent 49 hours in a laboratory setting. During each of the sessions, the volunteers received exposure to light at the same CCT and intensity level with the only difference being the SPD of the LED-based lighting products. The session with the conventional LED sources had the typical phosphor-converted, white LED SPD with a blue peak, whereas the SunLike LEDs don’t have a peak or a trough across the human visual range.

The University of Basel research marks the second university-level testing of the SunLike SPD relative to sleep. Last summer, we posted an article about a test at the Seoul National University College of medicine in which graduate students that studied under SunLike LEDs experienced better sleep patterns. Meanwhile, the SunLike LEDs also deliver excellent light quality with high CRI for demanding applications such as high-end retail and museum lighting as we wrote recently. The SunLike SPD is also finding usage in horticultural lighting applications such as in a Rofianda growing operation in the Netherlands.

We expect to see more SunLike-enabled lamps and luminaires at the upcoming LightFair International exhibition. But the LEDs do command a premium price attributed to both the three-phosphor mix that delivers the SPD and the fact that the technology platform is still maturing and manufacturing volumes are still relatively low.