The Biomedical Information Laboratory at the Seoul National University College of Medicine in Korea has conducted research on adults using desk lamps based on Seoul Semiconductor SunLike LEDs and found that the LEDs resulted in decreased eye discomfort and better sleep patterns. 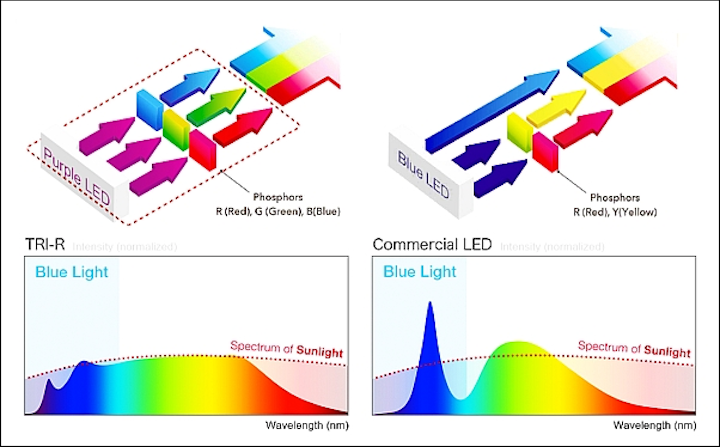 The Biomedical Information Laboratory at the Seoul National University College of Medicine in Korea has conducted research on adults using desk lamps based on Seoul Semiconductor SunLike LEDs and found that the LEDs resulted in decreased eye discomfort and better sleep patterns.

Seoul Semiconductor has released the results of a research project focused on young adults who spend extended periods of times studying at desks indoors and said that desk lamps based on the company’s SunLike LEDs improve eye comfort and sleep patterns. The Biomedical Information Laboratory at the Seoul National University College of Medicine in Korea conducted the research that had volunteers including graduate students at the university use both standard LED desk lamps and SunLike-based lamps for three hours before bedtimes.

The SunLike technology was announced just over a year ago and is named based on the fact that the spectral power distribution (SPD) of the LEDs mimics the SPD of the sun within the bounds of the human visual range. The LEDs use a three-phosphor mix and a violet emitter to achieve the SPD. Seoul has said that the LEDs can be used in a variety of applications including in human-centric lighting or lighting for health and wellbeing where tunable lighting can be applied to improve human wellbeing.

In the Seoul National University tests, the researchers analyzed the volunteers’ vital signs during sleep and conducted subjective analysis via a questionnaire. Based on monitoring the vital signs, the team said volunteers using the SunLike lamps fell asleep 23% faster than those using standard LED lamps. And the questionnaire revealed that those using the SunLike lamps noted a decrease in eye fatigue along with improved sleep quality. 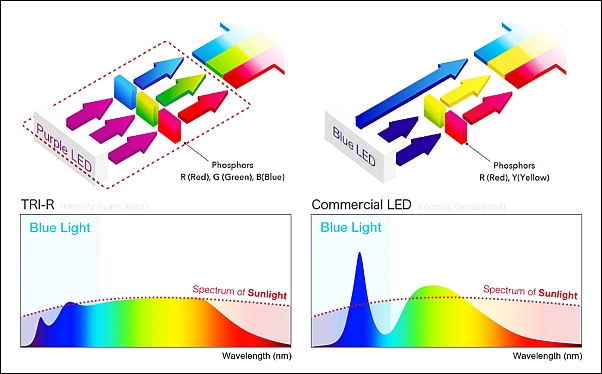 Seoul Semiconductors’ SunLike LED technology, which is said to mimic the spectral power distribution of the sun, has been shown in university trials to reduce eye strain and improve sleep patterns in the volunteers.

“We conclude that these effects are due to the stabilization of the autonomic nervous system rhythm, which is manifested by inactivation of sympathetic nerve and activity of parasympathetic nerve by SunLike based lighting,” said the research team at the university. “Light affects people’s circadian rhythm. In order to improve biorhythm, we can adjust the light according to time zone and use a light source close to sunlight.”

Still, the scientific community has said there remains a lot to be learned about the impact of light and SPD on the nonvisual and visual receptors in humans. Indeed, Seoul sponsored a symposium during the Light+Building (L+B) trade fair earlier this year where researchers discussed exactly that topic.

We continue to try and help move the science along as well. Indeed, this Wednesday, July 18, we will hold our second annual Lighting for Health and Wellbeing Conference in Newport Beach, CA. Dr. Octavio Perez from Mount Sinai Hospital, who spoke at the L+B symposium, has worked extensively with the SunLike LEDs and is on the agenda at our conference. Mariana Figueiro of the Lighting Research Center will deliver the keynote presentation.

Back to the SunLike technology, the SPD can support other applications as well, ranging from improving color rendering for retail or artwork to horticultural lighting. Recently, we covered an installation where the LEDs are being used to light murals in the Pompeii ruins, enabling visitors to see the historic works more clearly.