Philips Lighting has announced that it realized 200-lm/W performance in an R&D project focused on LED-based replacements for fluorescent tubes. 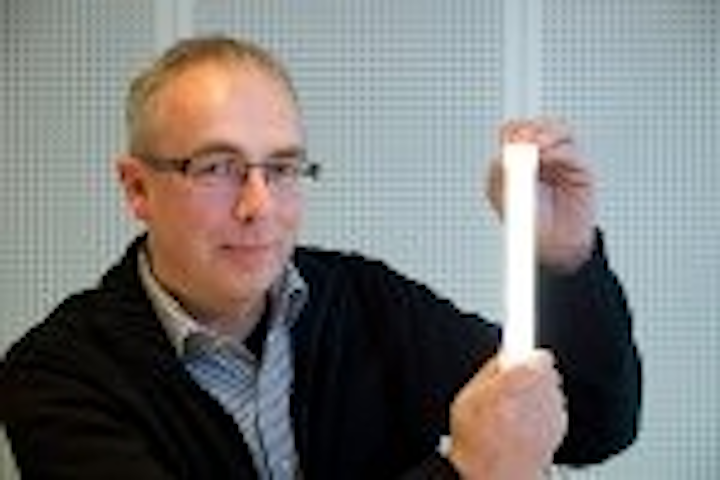 Philips Lighting has revealed laboratory work on an LED-based replacement for fluorescent tubes in which a so called TLED (Tube lighting LED) tube delivered 200 lm/W, including the driver, at a 3000K warm-white CCT. The company said it will bring such a solid-state lighting (SSL) product to market in 18 months to two years.

Philips chose to announce the lab project because of the magnitude of the opportunity for energy savings. Jy Bhardwaj, senior vice president or research and development, said 50% of global commercial lighting uses fluorescent tubes. The best such fluorescent lights operate in the 100-lm/W range so efficiency in that application could double in two years.

In the US, fluorescent lights consume 200 terawatts annually according to Philips. The company said retrofit of all such lighting with 200-lm/W tubes would be the equivalent of 50 medium-sized power plants.

Philips also chose to discuss energy at the system level, because the efficacy milestone was reached based on a combination of advancements in LEDs, optics, phosphor, and thermal technologies. "It's a real system application," said Bhardwaj. "All of the other [efficacy] announcements have been about individual components."

But while Bhardwaj talked generally about areas such as phosphors and optics, he wouldn't divulge many details. He did say that the prototype uses remote phosphor and that the remote phosphor is applied more in a traditional sense on secondary optics relative to the way that Philips is using remote phosphor on LED lenses in its newest retrofit A-lamps. He also said that the design uses a mix of blue LEDs that provide the white light via the phosphor and red LEDs to yield a warmer CCT. Philips used a similar mix in the L Prize winning A-lamp.

The combination of LEDs, phosphors and optics yields a tube that performs more like a traditional fluorescent tube in terms of generating light omni-directionally. The fact that LEDs are directional whereas troffer fixtures are designed so that light can be radiated up into reflectors has been one obstacle to the effective deployment of SSL retrofit tubes.

There are sparse additional details on what a product based on the announcement might ultimately look like. A Philips spokesperson said it was expected to integrate a driver and that it would likely be available in T5 and T8 formats when launched.

"This again is a major breakthrough in LED lighting and will further drive the transformation of the lighting industry," said Rene van Schooten, CEO of light sources and electronics for Philips Lighting. "After being recognized for our quality of LED light mimicking traditional light bulbs to creating new experience with Philips Hue, the connected light system for the home, we now present the next innovative step in doubling lighting efficiency. It’s exciting to imagine the massive energy and cost savings it will bring to our planet and customers."

Indeed Bhardwaj speculated that the technology developed in the TLED project could be broadly used in Philips lighting products. The company will likely leverage parts of the technology in A-lamps to luminaires just as it has used lessons learned from the L Prize winning development in subsequent products.