Signify, Osram, and others look interested in the company’s battery-free technology, which puts sensors and transceivers outside of the lights, powered by solar and kinetic energy. 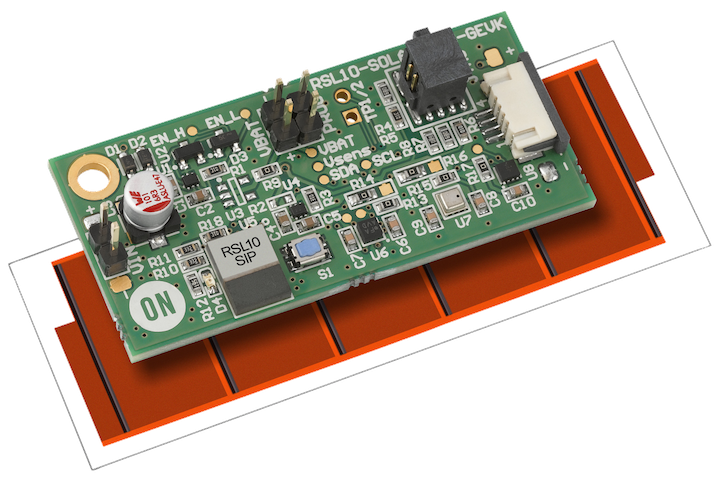 Lighting companies maintain that Internet of Things (IoT) chips for smart buildings belong inside luminaires where the components can draw on the same electricity that powers the lights and thus eliminate problematic battery-powered sensors mounted on walls and ceilings, independent of the lighting system.

It can be a compelling argument, but it’s also a self-serving one aimed at assuring the industry of its highly-sought slice of IoT pie. If the parts go inside the lights, then the lighting industry has a better chance of commanding revenue in competition against other industries, such as IT and building automation, that are also chasing the IoT bonanza.

Now, Phoenix-based chip giant ON Semiconductor is developing a third way: Mount the sensors outside of the lights, but power them from sources other than mains electricity or batteries, such as solar cells and kinetic energy.

That might sound like a potential blow to lighting companies who are desperate to hang more and more IoT goods and services from the lighting infrastructure.

But $5.9 billion ON Semiconductor says it is actually an opportunity for them to embrace. ON is offering these companies a new design that houses the sensors in a package that also includes a Bluetooth Low Energy (BLE) transceiver that communicates with luminaires to control light settings based on ambient light information coming from one of the sensors.

Thus, lighting companies can provide smart building services without embedding sensors inside the lights but by providing wall-mounted hardware that is connected wirelessly to the lights. All is done without relying on batteries, which, as everyone knows, ultimately fail and require laborious replacement.

And according to Bruno Damien, ON Semiconductor’s EMEA strategic marketing director for IoT, several lighting companies already have products in the works using the ON design. “They are making developments around this,” Damien told LEDs Magazine. In fact, world numbers one and two Signify and Osram are believed to be among the companies that have such goods underway, although ON would not comment on specific customers.

ON Semiconductor is offering several new designs and development kits in its battery-free, outside-of-the-lights approach, all of which it showed at the IoT World exhibition in Santa Clara, CA earlier this month. It is positioning them for use across commercial, home, and smart city settings, where ON will compete against other battery-less chip developers.

Central to ON’s scheme is its new RSL10 Solar Cell Multi-Sensor Platform, a reference design — a rectangular box in ON’s rendition (see nearby photo) — that includes a BLE transceiver plus sensors that between them note several conditions including temperature, humidity, atmospheric pressure, three-dimensional acceleration, and ambient light. The box is powered by a solar cell film that runs the length and width of it. 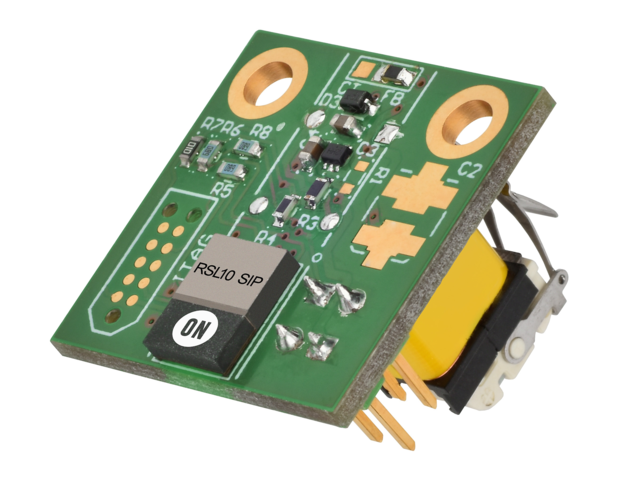 ON Semiconductor is also offering a battery-free Zigbee transceiver using the Green Power feature that is part of the Zigbee wireless specification. Unlike with the BLE radio, ON has not yet designed a package that includes the Zigbee radio plus sensors.

In another smart-lighting-related offering first announced last November, ON Semiconductor has designed a wireless light switch using the RSL10 BLE transceiver. Users touch the switch to instruct a light to turn either on or off. The same touch also provides kinetic energy that powers the battery-free switch, which can be mounted on a wall or moved around and placed anywhere, such as on a table.

While lighting companies might indeed embrace the new battery-free and wire-free technology, they will not be the only ones. As with the IoT in general, Signify, Osram, and the like will find themselves competing with companies from different walks of life — the Siemens and Schneiders of the building automation world, for instance — in deploying this twist on the IoT.

“Everyone is now fighting to get a piece of the cake,” observed ON Semiconductor’s Damien, noting that the battery-free design and the IoT in general will buoy a service business model — exactly the sort of new approach to revenue and profit generation to which lighting companies are moving now that their century-plus model of selling hardware is dying.

In a reminder that companies from various walks of life are all vying for the IoT, and that they will sometimes compete and sometimes cooperate, semiconductor stalwart Arm recently beefed up its IoT services business, including smart lighting.

Osram recently teamed with Austin-TX based facilities technology and management company Facility Solutions Group in its pursuit of IoT business in commercial buildings.

Lighting companies have noted that office luminaires, besides being a ready-made source of power, also provide the advantage of allowing a dense packing of chips and sensors, as luminaires typically exist in close proximity to each other. That can be especially useful for certain applications, such as occupancy detection, they note.

But some sensing functions are better left outside of the lights. For example, temperature sensors might not take a true reading of a room if they are in lights and thus near heat, and are perhaps more effective when mounted physically at a lower level in a room.

Jonathan Catchpole examines the sensing demands that will increasingly be required of SSL, and a module-based LED luminaire development approach for intelligent lighting and the IoT.
Nov 27th, 2018